Infections are the most frequent event in cirrhotic patients who develop acute-on-chronic liver failure. This implies long term internment and is associated with high mortality rate of approximately 32%. Cirrhosis is associated with impaired immune response, alterations in gut microbiota that lead to pathological bacterial translocation (BT).

Spontaneous bacterial peritonitis (SBP) is the most typical infection observed in cirrhosis patients. Changes in the bacterial flora of cirrhosis patients, wide-scale use of quinolones in the prophylaxis of SBP have increased the prevalence of infections caused by multi drug resistant bacteria (MDR).

The efficacy of traditionally antibiotic therapy has been low in nosocomial infections (up to 40%), and multi drug resistance has been observed in up to 22% of isolated germs in nosocomial SBP.

Nosocomial SBP has been associated with poor outcomes. Therefor the European Guidelines recommend the use of a broad empirical spectrum antibiotic in these situations.

Broad-spectrum antimicrobial agents, such as carbapenems associated with glycopeptides or piperacillin-tazobactam, should be considered for the initial treatment for nosocomial infections and also of healthcare-associated infections when there is high suspicion of MDR bacteria. Community- acquired infections can be managed with the use of cephalosporin.

We present a clinical case of a cirrhotic patient with decompensated disease who has been admitted in our Gastroenterology Unit of Garcia de Orta Hospital, Almada Portugal, with the diagnosis of hepatic encephalopathy and a high suspicion of infection.

Patients with cirrhosis which are hospitalized for an acute decompensation or an organ failure are at high risk for imminent death and considered to have acute-on-chronic liver failure (ACLF).

In cirrhotic patients admitted in the hospital for an acute decompensation, the most frequently observed infections were urinary tract infection, spontaneous bacterial peritonitis (SBP), respiratory infection followed by skin infections. There is a strong association between bacterial infections and alcoholic etiology of liver disease, Child-Pugh class C, and the presence of upper gastrointestinal bleeding. Therapeutical approach must be prompt and large spectrum antibiotics should be used to treat patients with bacterial infections and decompensated cirrhosis, to cover the most commonly isolated bacteria and maximize the patient’s chance of survival [6]. The epidemiology of bacterial infections in cirrhosis changed worldwide showing an increase rate of multi-drug resistant (MDR) bacteria and a decreased efficacy of antibiotics [7].

We present a clinical case of a decompensated cirrhotic patient hospitalized for an acute episode of hepatic encephalopathy (HE). Written informed consent for the publication of his data was obtained from the patient.

The patient was admitted in Gastroenterology Unit for abdominal distention and alteration of mental status in the last three days.

The patient had a decompensated liver cirrhosis Child Pugh Score C, MELD-Na 18 points, ECOG Performance Status 3, diagnosed with refractory ascites, renal dysfunction and aortic stenosis. At admission we did laboratory tests including hemoleucogram, transaminases and cholestasis tests, renal and coagulation function, Chest X-Ray, urinary exam and urinary culture, blood cultures for aerobic and anaerobic bacteria. Clinical exam showed temporal and space disorientation, flapping, discrete skin dehydration with normal mucosal coloration. He was afebrile, presented no vomit episode and no signs of digestive hemorrhage. He had a grade three ascites but no abdominal signs of peritoneal irritation. The patient had no intestinal bowel movements in the last two days and he refereed normal diuresis.

The patient was hospitalized admitting a urinary tract infection (UTI), hepatic encephalopathy (HE) grade 2 and started empirically treatment with Ceftriaxone 2 g/day for the community acquired infection and albumin conform paracentesis protocol. We also added lactulose for constipation, vitamins of group B and stopped diuretics or nephrotoxic medication. During internment the patient was hypotensive with systolic arterial pressure measures of 80 mmHg and diastolic arterial pressure of 40 mmHg. He had periods of gross confusion even with 2 times daily intestinal bowel movements with high dose of lactulose. His diuresis was decreasing and needed a urinary catheter to monitor daily diuresis. The blood cultures came negative. His clinical state had no improovment on antibiotic therapy. After four days we repeated paracentesis with cytological-biochemical test and culture of ascitic liquid. We repeated blood culture and laboratory blood test. The laboratory tests showed worsening anaemia (Hg 7mg/dL), increasing leucocytosis 10000 leucocytes with 82% polimorfonuclears (PMN), increasing CRP 10 mg/L, an aggravating renal function with a creatinine 2,3 mg/dL, blood urea nitrogen 87 mg/dL and coagulation INR 1,8, prothrombin time (TP) 31, aPTT 30%. The cytological and biochemical test of ascitic fluid was compatible with SBP (PMN > 250 cel/mm).

The patient was already on ceftriaxone for 7 days but with an aggravation of his clinical and laboratory status. We admitted a SBP decided to escalate the antibacterial therapy to Piperacilin/Tazobactam, until the result of ascitic and blood culture were ready and add albumin 1,5g/kg body/day in the first day followed by 1g/kg body/day on third day, according to EASL guideline [7]. He received one unit of eritrocite concentration for his anemia with a good response (Hg 8,2 mg/dL).

In this point we had a patient with decompensated cirrhosis with the diagnostic of UTI and SBP, with no response on ceftriaxone classic antibiotic therapy.

Our patients had an acute-on-chronic liver failure (ACLF) grade 3, with three organ dysfunctions: cerebral (HE grades 2/3), acute kidney injury (AKI 1B), circulatory dysfunction with a decrease in blood arterial pressure (systolic/diastolic hypotension). The blood cultures were negative but the ascitic culture was positive. 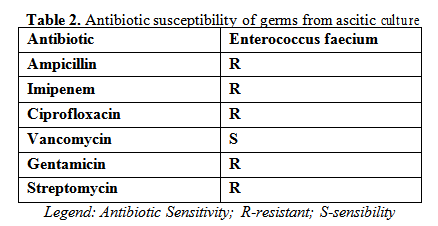 The patient had an MDR SBP during hospitalization, so we started Meropenem and Vancomycin adapted on his renal function. The test of his ascitic liquid after 48 hours of antibiotic therapy, showed a good response to treatment with a decreasing of PMN more than 40% of initial value. He had a good clinical outcome, improoved HE (grade1), improved renal function and arterial pressure profile.

His laboratory tests showed a decrease in leucocyte count but he maintained CRP level higher than normal value for the next days.

After 10 days of antibiotic treatment the patient has been discharged from the hospital to ambulatory with close clinical and laboratory follow-up in hepatology consultation.

Acute decompensation (AD) is the main cause of hospitalization in patients with cirrhosis. AD develops frequently in decompensate cirrhotic patients and is associated with organ failure and worsening of liver and kidney function and dysfunction of other organs.

ACLF is based on the presence of the 3 major characteristics of the syndrome: AD (criteria present in all patients), organ failure (predefined by the SOFA-CLIF score), and high 28-day mortality rate.

SBP is defined as a bacterial infection of ascitic fluid, without an evident source of sepsis in the peritoneum, frequently occurring as a complication in patients with decompensated liver diseases.

Diagnosis is made on ascitic fluid cell analysis (polymorphonuclear cell count ≥ 250/mm3) and positive ascitic fluid culture [12]. The pathogenic mechanism underlying SPB is the bacterial translocation from the gut in cirrhotic patients that have an altered composition of gut microbiota [10].

Spontaneous infections in cirrhosis are caused by Enterobacteriaceae and non-enterococcal streptococci, methicillin-resistant Staphylococcus aureus (MRSA), and vancomycin-resistant enterococci (VRE) and might be a consequence of prolonged use of β-lactams and quinolones for secondary SBP prophylaxis [13].The invasive procedures like repeated ascitic liquid drainage to which patients with cirrhosis and refractory ascites are currently submitted have induced important changes in the epidemiology of bacterial infections in these patients. MDR bacteria are pathogens resistant to 3 or more of the main antibiotic families [14].

Spontaneous and secondary infections caused by multidrug resistant bacteria are nowadays increasing in this population [6] [12]. Various reports show extensively drug-resistant bacteria such as Carbapenemase-producing Klebsiella pneumonia (K. pneumoniae) and vancomycin-resistant enterococci are the cause of MDR infections in patients with cirrhosis. A study made on greek population of cirrhotic infected inpatient reveals that a high percentage of infections were resistant to third-generation cephalosporine (43,8%) and to quinolones (49,2%), showing cross-resistance to amoxicillin/clavulanate acid [8] [15].

E. faecium was found to be a common pathogen in inpatiet infection, presenting as 57% of the total Enterococci. E. faecium infection was considered in previous studies as a multiresistant organism because its high resistance to at least three antibiotic class: ampicillin, third generation cephalosporins and quinolones [14] [16]. We confirm this report, as in our patient we had positive culture with E. faecium in ascitic liquid, sensitive to Vancomycin and resistant to other class of antibiotics.

This clinical case shows the risk infection with MDR bacteria in immunocompromised patients with liver cirrhosis and the need of implementation of high broad-spectrum antibiotic treatment as early as possible when infection is suspected. The EASL guidelines appoint of using Piperacillin/Tazobactam as the primary approach for health care and nosocomial SBP in areas with low prevalence of infections sustained by MDR bacteria. In areas with high prevalence of MDR organisms it is suggested to use Meropenem alone or combined with glycopeptides or with daptomycin [17] [14] [18].

Nosocomial spontaneous bacterial peritonitis (N-SBP) develops in up to one-third of cirrhotic patients during hospitalization period. The overall survival for N-SBP is about 20%, influenced by rapid empiric antibiotic approach concerning bacterial aetiology and the prevalence of multiple drug resistance pathogens [12].

Laboratory tests including C-reactive protein (CRP) and procalcitonin (PCT), two acute-phase serum proteins are commonly used as early markers of infection in general population. Patients with cirrhosis may present reduced CRP and PCT levels, particularly CRP in response to infection. Studies show that the predictive power of CRP and PCT for detecting infection has been found to be similar in patients with and without cirrhosis [19]. In our case report laboratory test showed an increased CRP (10 mg/dL) when the diagnosis of SBP was made and the patient maintained an increased value of CRP (9mg/dL) after antibiotic therapy was finished.

Bacterial infections represent a life-threatening complication of cirrhosis, especially in decompensated patients who need prolonged hospitalization. Infections play an important role in developing acute on chronic liver failure which has a high mortality in this population.

MDR bacterial infections in cirrhotic patients are difficult to manage and it is useful to know local bacterial epidemiology in order to make a rational use of antibiotics. Monotherapy seems to be ineffective in a significant proportion of cirrhotic patients and a more complex approach including broad spectrum antibiotic combinations should be considered for empirical therapy.

Third-generation cephalosporines could be used as an initial approach in patients with community- acquired SBP without signs of severity. Broad-spectrum antibiotics, such as carbapenems associated with glycopeptides or piperacillin-tazobactam, are recommended for the initial treatment, when there are risk factors for multi-resistant bacteria. When positive cultures are present, de-escalation of therapeutic is recommended to minimise resistance selection to antibiotics.

Availability of data and materials

All data generated or analyzed are included in this published article. The datasets used and/or analyzed during the current study are available from the corresponding author on reasonable request.

RA, PM and FC collected and analyzed the data. RA, CD and NA wrote the manuscript. RA and FC corrected the language of the paper. All authors have contributed to and approved the final manuscript.

The authors declare that they have no competing interests.

[2] University of Medicine and Pharmacy of Craiova, (ROMANIA)