Hypoxic-ischemic encephalopathy is a well-defined and easily recognizable syndrome in term newborn infants, while its definition, clinical features, evolution and complications are much more complex in the preterm infants. The incidence of hypoxic-ischemic lesions in premature infants is underestimated. They are accompanied by increased frequency of neurodevelopmental disorders, sensorial, attention and cognitive deficits, and behavioral disorders. The classical lesions described are periventricular leukomalacia and cerebral hemorrhage, with or without ventricular dilatation.

Nowadays the association of lesions in the corpus callosum or basal nuclei are discussed.

We present the case of a premature infant born by cesarean section at 33 weeks of gestation, from a pregnancy with severe preeclampsia and HELLP syndrome; birth weight 1900g, Apgar scores 1/3/5. Resuscitation at birth included positive pressure ventilation on orotracheal tube.

The first cerebral ultrasound revealed peri/intraventricular hemorrhage, which occupied both lateral ventricles and the third ventricle; intraparenchymal and epidural hemorrhage; ischemic areas at the level of basal nuclei. At 2 weeks of age multiple cystic lesions in the periventricular white matter, extending to the subcortical area were noted. It associated rapidly progressive obstructive hydrocephalus. Mechanisms that have favored brain damage are complicated: severe hypoxia and acidosis, hemodynamic disorders and cerebral ischemia, prematurity and also postnatal factors.

The incidence of premature births is estimated at 11.1% of all live births and is steadily increasing. [1] Premature babies are at increased risk for many severe conditions, such as respiratory distress syndrome and bronchopulmonary dysplasia, necrotizing enterocolitis, infections, retinopathy of prematurity. They are also at increased risk for brain injury and motor, sensorial, cognitive and attention deficits, and behavioral disorders. The incidence of these disorders increases with increasing survival rates of preterm infants with extremely low birth weight. More than 17% of premature infants develop severe neurodevelopmental abnormalities and more than 42% of preterm babies less than 1000 g develop minor abnormalities.

The incidence of cerebral palsy is estimated at 5-10% of preterm infants less than 1500g and 6-20% in preterm infants less than 26 weeks of gestation. [1] Hypoxic ischemic encephalopathy of the premature newborns is a mixed of destructive and developmental disturbances. Although hypoxic-ischemic encephalopathy is a well-defined and easily recognizable syndrome in term newborns, the incidence of hypoxic-ischemic lesions in premature babies is underestimated. Their recognition is related to a preceding event. Rapid cerebral transformations that occur at 24-40 gestational weeks increase the brain's vulnerability to risk factors such as infection/inflammation, hypoxia-ischemia, acidosis, hypoglycemia, free radicals and excitotoxic factors. As a result, lesions of the white and gray matter, ventriculomegaly or the reduction of cerebral cortex and basal nuclei volume may occur. [2] Classically, three types of lesions are described: periventricular leucomalacia, basal ganglia/thalamus lesions and multicystic encephalopathy. [1, 3]

In this paper we present the association of multiple lesions in a preterm infant with severe perinatal hypoxia. We also analyze the risk factors involved in their determinism.

Premature newborn (32+5 weeks of gestation) from a pregnancy with severe preeclampsia and HELLP syndrome is born by emergency cesarean section, for alteration of maternal status and acute fetal suffering; birth weight 1900 g, Apgar scores 1/3/5. The baby required complex resuscitation measures: positive pressure ventilation on the orotracheal tube, external cardiac massage and Adrenaline. Upon admission to NICU – intubated and ventilated (IPPV), no spontaneous breathing, atonia, no reflexes. Blood gases evaluation reveal mixed acidosis. The newborn requires respiratory support (IPPV). At 4 hours of life, the first spontaneous breaths occur, so the respiratory support is switched to SIMV for other 48 hours and then nasal CPAP was provided. For correction of severe and persistent hemodynamic disorders and acidosis, saline bolus and vasoactive support – Dopamine, 5 micrograms/kg/min, and fresh frozen plasma were administered. Repeated administration of sodium bicarbonate 1-2mEq/kg was necessary.

Evolution was marked by stabilization of vital functions and improving neurological status with resuming active motility, improving muscle tone and archaic reflexes. At 4 days of life the baby developed seizures.

Repeated ultrasound scan evaluations revealed progressive increase in both lateral and third ventricles dimensions, but also the emergence of centimetrical cystic lesions secondary to parenchymal infarction and microcysts characteristic of periventricular leukomalacia. (Fig. 5-6-7) Eventually, progressive hydrocephalus with significant reduction of occipital lobe parenchyma and the formation of numerous cysts in the frontal parenchyma is noted. 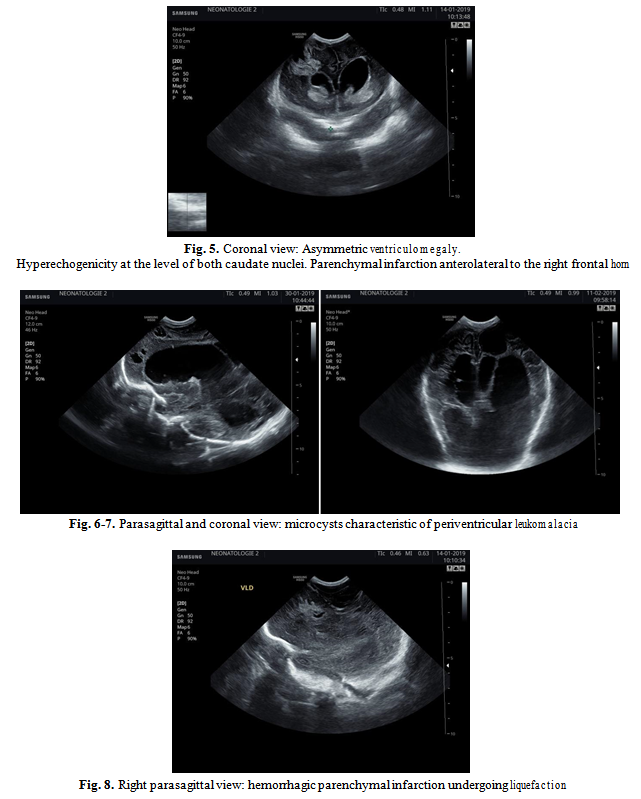 Periventricular white matter injury (WMI) and its most severe form, periventricular leukomalacia, as well as intracerebral hemorrhage and intraventricular hemorrhage are the most common types of ischemia-related injuries.[4] Periventricular leukomalacia as an effect of hypoxia, ischemia and inflammation is a common finding in premature newborns below 32 weeks gestational age.[5] Evan there are remarkable improvement in perinatal care and the incidence of periventricular leukomalacia and cerebral hemorrhage has decreased, subtle alterations in premature brain development are described.[6] Mechanisms that favor their emergence are related to premature brain vulnerability to the action of numerous antenatal, intrapartum or postnatal factors. Between 24 and 40 gestational weeks there are active processes of development of the white matter involving precursors of oligodendrocytes, that are extremely vulnerable to hypoxic- ischemic insults. The abundance of glial cells that produce proinflammatory cytokines and release free radicals and the presence of cell proliferation areas located in the germinal matrix also contribute to the occurrence of hypoxic-ischemic lesions. Vascular fragility and decreased ability to self-regulate cerebral blood flow are also associated. The severity and location of the lesions depends on the intensity of the hypoxic insult and its duration. However, there is an increased vulnerability of certain cerebral regions, particularly the gray nuclei, the primordial neurons of the fetal cortex with a role in receiving the impulses from the thalamus axons, their damage causing the development of abnormal thalamocortical connections. Impaired of the cerebral blood flow is the “Trigger” of the pathophysiological cascade that will end with neuronal death. [7, 8, 9, 10]

In our case the antenatal factors that favored the development of cerebral lesions were hypoxia, severe acidosis and cerebral ischemia secondary to decrease in cerebral blood flow; postnatal hemodynamic disorders with persistent hypotension, tissue hypoxia and severe and persistent acidosis. At the admission to Neonatal Intensive Care Unit the child had severe hypotension which was corrected after fluid administration and vasoactive support. Correction of metabolic acidosis required the administration of sodium bicarbonate.

Prematurity was another major risk factor. Severity of lesions advocates the long-term action of the factors involved. It is well known that in premature brain mild hypotension causes periventricular injuries, while severe hypotension causes cerebral infarction of the deep gray matter, brainstem and cerebellum.[11] The severity of perinatal suffering was marked by the increased value of the resistance index at the middle cerebral artery. (RI). Increased RI associated with severe asphyxia and cerebral hemorrhage like in our case have a poor prognosis. [11, 12]

Interaction between ante and postnatal factors mentioned above, has determined the presence of various types of lesions in the same child: parenchymal infarctions, intraventricular and subarachnoid cerebral hemorrhage with post hemorrhagic hydrocephalus evolution, cystic lesions in periventricular white matter. All this gives a poor neurological prognosis for the child's subsequent progression.

Cranial ultrasound is a useful tool for the diagnosis and follow up of hypoxic ischemic injuries, especially when is difficult to obtain other images.