The development of entrepreneurship and its various types and manifestations are of particular importance for each region and country. For countries in transition, its encouragement and promotion are even more important as it generates prosperity in insecurity and helps for the achievement of both important economic social goals. The countries from Southeast Europe have gone through turbulent transitions over the last 30 years, including armed clashes, redefining almost their entirely territorial characteristics, governance and belonging. During this period, they are in the focus of both the EU and global organizations such as the United Nations, identifying specific programs to promote their development.

Although there are different views on the composition of the countries included in this region, EU members are (in alphabetical order): Bulgaria, Greece, Slovenia, Romania and Croatia. As of January 1, 2018, according to Eurostat data, 8.5% of the EU population lives in these countries or more than 43 million people, with the largest population of these countries being Romania. The longest member of the EU is Greece, which joined in 1981, been a member of the Eurozone since 2001, and been a member of NATO since 1952. Following the changes of late 1989, Bulgaria and Romania have been pursuing a strengthening policy of relations with the EU and the US. Romania and Bulgaria have become members of the EU since 2007 and joined NATO in 2004, along with Slovenia and four other countries. Although the modern Slovenian state is the youngest of those surveyed, it was founded on June 25,

1991, after the breakup of Yugoslavia, ranks first among the Slavic countries in terms of GDP, and achieved the most successful political actions leading to high economic results. Joining the EU in 2004 and adopting the euro in 2007. Last Croatia joined EU (2013) and NATO (2009). This article focuses on key indicators that characterize the entrepreneurship development environment in the surveyed Southeast EU member countries, seeking their place at the middle levels across the EU and the world. The main sources of information are: GEM, data from national statistical institutes as well as information on the imbalances in the development of European countries.

Parameters  of  the  business  environment  are  often  in  the  focus  of  researchers  by subdividing them into different criteria. A successful option for determining and analyzing the elements of this environment are the outlined and long-lasting 14 GEM parameters, namely: Perceived Opportunities, Perceived Capabilities, Total Early-Stage Entrepreneurial Activity (TEA) Business Ownership, Entrepreneurial Employee Activity, Motivational Index, Female/Male TEA, Female/Male Opportunity-Driven TEA, High Job Creation Expectation, Innovation Index, Business Services Sector, High Entrepreneurship and Entrepreneurship As A Good Career Choice. Part of the data collected for these environmental parameters dates back to 2001, but data for the countries surveyed started later.

One of the most important moments in entrepreneurship is related to the existence of a positive attitude and behavior aimed at undertaking entrepreneurial endeavors. A major role here is the national culture as it influences through the overworked perceptions of labor, property, market, etc. Historical vicissitudes also have their own imprint on how businesses are doing in the country. Equally important are the social dimensions of entrepreneurship in a particular cultural context as imposed insights on the role, importance and figure of the entrepreneur.

Starting parameters for entrepreneurship are the perceived opportunities and capacities. For these indicators, the countries surveyed have the following characteristics:

According to data in Table 1, perceived opportunities indexes are the highest in Slovenia with 42.17% in 2018. Although the starting levels of Slovenia (2014) are similar to those of Bulgaria and Greece, the levels of this indicator remain almost unchanged  and fluctuate around and below 20%, and in Slovenia there is a jump in this index. The most significant increase is registered in Slovenia – for 5 years the increase is almost 2.5 times, while in Croatia the increase is also noticeable from 18.43% to 33.13%. In all countries surveyed, there is a trend towards increasing indicator levels, indicating that potential entrepreneurs rather perceive the environment, the area in which they operate, positively.

The Perceived Capabilities Index (the percentage of 18-64 people who believe they have the required skills and knowledge to start a business) shows very high levels for the surveyed countries, with most of the values being close or even more than 50%. This shows high levels of confidence among entrepreneurs in the skills and knowledge they possess to start and manage entrepreneurial projects. Particularly high in 2018, they are in Slovenia (50.97%) and Croatia (52.32%), and the lowest in Bulgaria (36.88%). In the EU, in 2018, the lowest in this indicator for Italy was 29.77% and the highest in Slovakia was 53.29%.

Courage for business is accompanied by parallel processes of fear of failure. According to this index, the surveyed countries with the highest levels distinguish entrepreneurs in Greece, followed by those in Slovenia, Bulgaria and Croatia. Compared to developed EU Member States, the levels of most of the countries surveyed are identical to them, except Italy, which indicates levels of failure around 50%. The high fructification levels of each of the indicators for the countries surveyed are impressive. However, the risk of failure by Greek entrepreneurs (almost 58%) is not much lower than the highest recorded in the world in 2018 in Morocco, which is 64%. The long years of crisis in Greece have an enormous impact on entrepreneurial endeavors, and this reflects on their concerns about failure in their activities.

Entrepreneurial intentions occupy a particularly important place in current researchers’ studies in this field. These are potential entrepreneurs in the economy who, within three years, intend to launch their own initiative, generate income, innovation and employment.

Unfortunately, during the analyzed period with the lowest levels of entrepreneurial intentions is characterized Bulgaria, even in 2018 they fall further and reach only 3.91%.

They are also lowest for the EU as a whole. At the other extreme is Croatia, which in 2018 has  the  highest  levels  of  this  indicator  –  18.62%  and  during  the  analyzed  period  also maintains one of the high levels.

An interesting cluster of metrics is TEA, as GEM collects information on 7 indexes: Total early-stage Entrepreneurial Activity Rate, Motivational Index, Female/Male Opportunity- Driven TEA Ratio, Female/Male Opportunity-Driven TEA Ratio, Innovation Rate and Business Services Sector Rate. The overall TEA index, which covers nascent or potential entrepreneurs, shows that their percentage in the surveyed countries is very low and the lowest in Bulgaria for 4 of the 5 years surveyed. For 2016-2018, the highest value of this indicator is for Croatia and the previous years for Romania. In the EU with the highest TEA levels, are at Estonia and Latvia – between 14 and 20%, and the highest figure in the world in 2018 indicates Angola with 40.84%, which is almost 7 times higher than in Bulgaria.

TEA indexes following Female/Male ratios indicate that in Bulgaria and Croatia two genders are close to equity in entrepreneurial activities and female entrepreneurs tend to be more opportunity driven. The Motivational Index, showing the percentage of those involved in TEA that are improving motivated motivation, divided by the percentage of TEA that is necessity-motivated, shows Greece to be the first place for 2018 (but Slovenia all rest years) and again Bulgaria in the last one. The rest of TEA indexes show varying values for analyzed countries. Percentage of those involved in TEA who expect to create 6 or more jobs in 5 years (High Job Creation Expectation Rate) show the lowest expected by Bulgarian entrepreneurs in

2018 (only 2.53), followed by the Greek in 2015 (4.30). In contrast, the expectations of the Croats (moving values between 26.54 and 33.36) are much more optimistic, as the trend is high, but with decreasing values over the analyzed period. Innovative indexes again point to the  fact  that  the  nascent  are  the  least  in  the  case  of  Bulgarian  start-ups,  and  the  most innovative are Slovenian (2014, 2016 and 2017). The Business Services Sector, which represents the percentage of those involved in the TEA in this sector, also provides one of the last places for Bulgarian entrepreneurs, not only among the studied countries, but also across the EU, and the Slovak entrepreneurs in the top positions, although at levels they are significantly lower than the leading countries in this indicator – Luxembourg and Sweden. 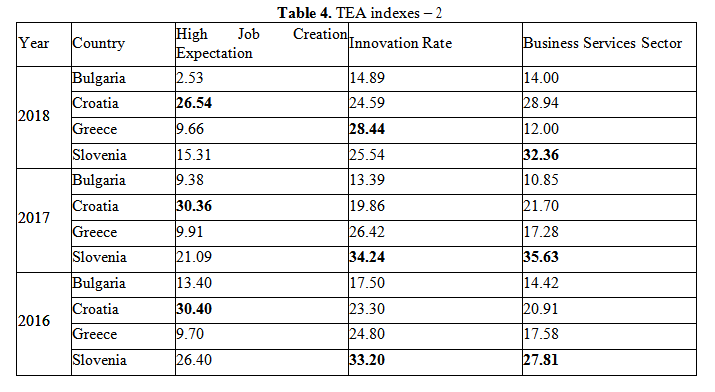 An interesting moment for research is the perception for entrepreneurs in society. To be perceived as people with a high status in society due to the successful entrepreneurial projects realized in Bulgaria, Greece and Slovenia, and entrepreneurship is perceived by the Croats as a less prestigious occupation. Against the background of their high levels of other indicators, this perception is extremely curious. Whether to select entrepreneurship as a career path for development follows the next indicator. He points out that apart from the prestigious Bulgarians, they consider it appropriate to be an entrepreneur. The same opinion is shared by entrepreneurs from other countries surveyed. 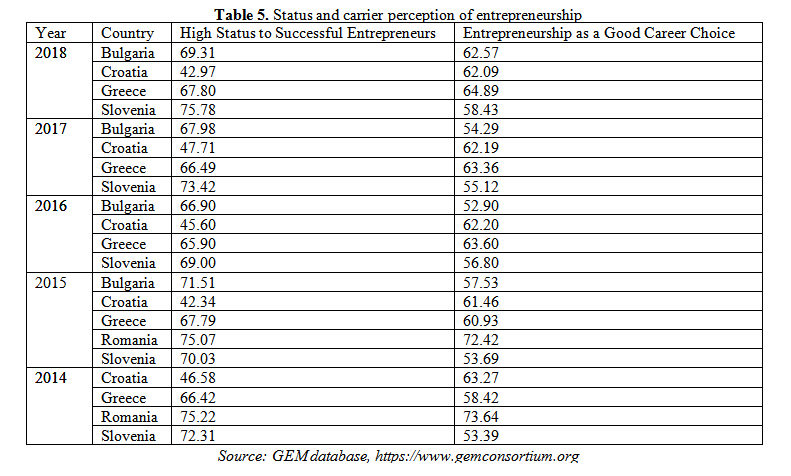 Summing up in the field of entrepreneurship, it can be noted that during the transition years in the countries of Southeastern Europe that are members of the EU there is a strong dynamic in the parameters of the environment that is related to the development of entrepreneurial endeavors. The countries surveyed are developing their own way, making Slovenia and Romania (where information about it) impressions with their high levels of encouraging elements of the environment.

The other pole is Bulgaria, whose indicators are often the lowest of the surveyed countries, and are sometimes the lowest in Europe and close to the lowest in the world. Data suggests levels of action at the political level on setting up a stimulating environment for new and existing entrepreneurs and once again focuses on the impact of poisoning tentacles on corruption and bureaucracy on the business environment.