Acute pancreatitis is an inflammatory condition of the pancreas characterized clinically by abdominal pain and elevated levels of pancreatic enzymes in the blood. The pathogenesis of acute pancreatitis is not fully understood. Nevertheless, a number of conditions are known to induce this disorder with varying degrees of certainty.

We present the case of a patient who had an episode of acute biliary pancreatitis at 36 gestational weeks.

The pathogenesis of acute pancreatitis is not fully understood, but a number of conditions are known to induce this disorder, with gallstones and chronic alcohol abuse accounting for two-thirds or more cases in the United States [1].

Acute pancreatitis is rare during pregnancy. In a retrospective cohort study of 16,000 deliveries, only eight cases of acute pancreatitis were noted; five were due to gallstones and the others were idiopathic [2].

Patients who developed pancreatitis in the first trimester of pregnancy had the highest risk of fetal loss (20%) and pre-term delivery (16%).

A 31-year-old (so, no amniocentesis [16] was needed), primigesta, primipara pregnant woman, at 36 weeks presents to the emergency service for epigastric pain with irradiation in the right and left hypochondrium. Following clinical, paraclinical and interdisciplinary examinations the patient was diagnosed with acute pancreatitis, caused by gallbladder problems.

We noted the serum amylase value which was 30 times higher than the normal one (3163 UI/ L), undetectable lipase, and the rest of the blood tests within normal range.

Abdominal ultrasound revealed gallstones with diameters between 3 and 8 mm, and a partially visible pancreas.

Our diagnostic was lithiasic pancreatitis.

An interdisciplinary commission was formed, consisting of a surgeon, a gastroenterologist, an obstetrician who decided having an urgent cesarean delivery (so, no adapted partogram [17] was possible in this case), with a usual spinal anesthesia, without having the time to reflect on alternative possible drugs for this [18]. We extracted a live, normal, fetus, single female  sex,  weight  3180g,  Apgar  9  and  transferred  the  patient  to  the  intensive  care department.

Following the colangio-IRM (Fig. 1), the gastroenterologist recommended delaying the ERCP (Endoscopic Retrograde Cholangiopancreatography) by 7 days, after surgery a. Also, he opted for a cholecystectomy after the termination of the confined period 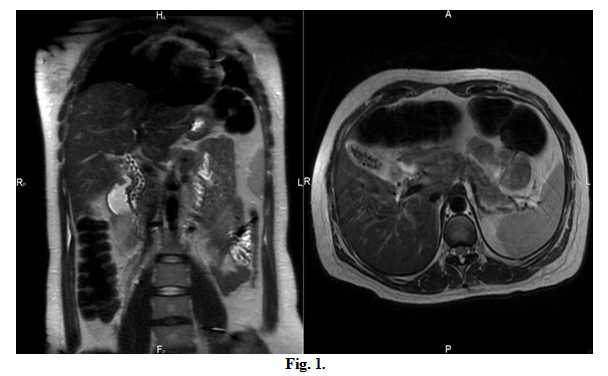 Further favorable evolution was noted, after having the ERCP done, with normalization of pancreatic values.

The patient was HIV-negative, so no immunological suppression was observed [19], without any other pre-gestational pathologies, difficult to assess etiologically [20], [21], [22], or other pain-inducing pathologies [23], [24].

It seems that pregnancy increases the risk biliary pathology [25] – which could be related to a pancreatic pathology, but in this patient, it was not the case.