Cervical pregnancy is a rare ectopic pregnancy and it becomes almost unique when it occupies the myometrium, leaving cervical canal, free. The complications of this locations are very serious, manifesting themselves through massive haemorrhage, which is why in most cases it comes down to hysterectomy and in extreme cases may even lead to death. The objective of the article is to present the management of a case with cervical intramural pregnancy.

Ectopic pregnancies have an incidence of approximately 2% of the total pregnancies, of which 90% are located in the fallopian tube [1].

Cervical pregnancy is a rare ectopic pregnancy that is caused by the implantation of the embryos to the level of the cervical canal. This may be favored by several factors, such as dilation and uterine curettage, caesarean delivery, and in vitro fertilization. The erosion of cervical blood vessels leads to haemorrhage that can threaten the patient life. Various treatments for this condition are known, including the administration of methotrexate, curettage and hysterectomy.

A 23-year-old patient that was brought with an ambulance from a second-degree unit to our third-degree unit, with the diagnosis of 8 weeks cervical pregnancy in evolution. Patient examination reveals moderate metrorrhagia. Ultrasonography showed an 8-week pregnancy with cervical, intramural localization that keeps the cervical canal free, therefore the patient was hospitalized for specialized treatment (Fig. 1, 2, 3). 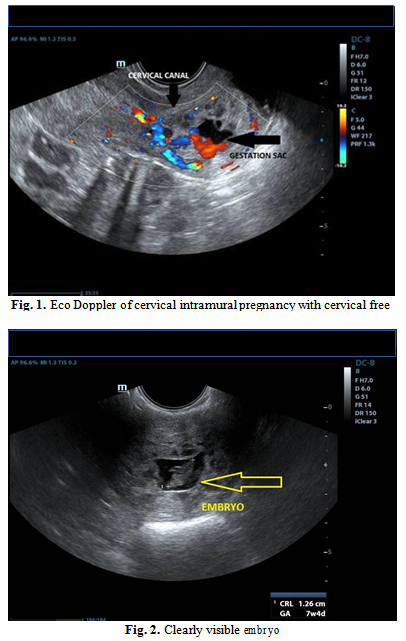 Blood tests revealed a slight anaemia, the rest of the values being normal. Shortly after hospitalization bleeding became massive and the decision to perform hysterectomy was inevitable. The procedure and all its consequences have been explained to the patient and she has given her consent, understanding that the bleeding cannot be stopped in any other way.

Soon after, she was taken to the operating block, and the surgery started. Intraoperative inspection of the uterus, showed that the posterior wall of the cervix was dilated by a tumoral formation (Fig. 4). 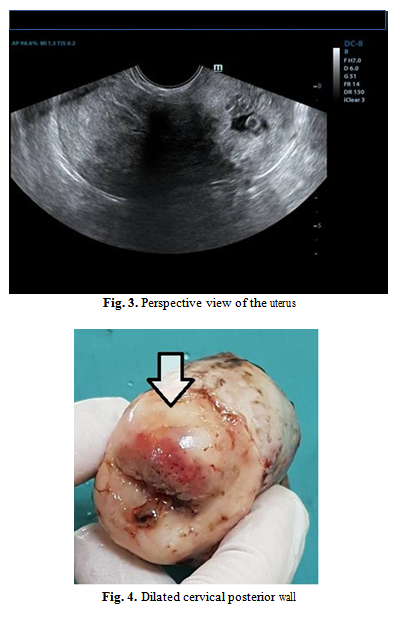 The operation was performed without any complications. After surgery, the patient recovered relatively quickly and the histopathological examination further supported the initial diagnosis.

Ectopic pregnancy, regardless of its localisation, is an emergency that can endanger the life of the pregnant woman, so it is imperative that the therapeutic approach is as effective as possible, taking into account the possibility of conserving fertility when it is possible.

For a long time, doctors have tried to find non-surgical alternative treatments for this condition, thus giving the patient a new chance of procreation. Many conservative methods have been described today that have had encouraging results and that in the future, with more obstetrician experience, could replace surgical treatment. Computerized processing of imaging results by three-dimensional modeling and simulation can be useful to explain some phenomena that occur in the body [4, 5, 6].

The cervical pregnancy, under the rare occurrence of less than 1% of ectopic pregnancies, is a real challenge given by the limited experience of obstetricians, unlike the tubal pregnancies that account for almost 99% of the ectopic pregnancies. Furthermore, through erosion of cervical blood vessels, in some situations, massive haemorrhage does not allow the initiation of any treatment other than emergency surgery [7]. In cases with vaginal bleeding it is very important to take a sample to exclude cervical neoplasia [8].

First-line treatment aims to preserve fertility, that is why attempting to administer methotrexate intramuscularly or directly into the gestational bag is the first step to do, when the situation allows it. The first medical treatment with methotrexate in ectopic pregnancies was introduced in 1982 and aimed at destroying the pregnancy without affecting the fertility [9].

Different studies show different results related to the efficacy of this treatment, most of them being favourable. The results of this treatment differed depending on gestational age, on fetal heart activity and HCG level, but in general, as the gestational age was lower at the time of treatment, the results were more favourable [10]. In this case the woman received 3 doses of methotrexate in the last 2 weeks of gestation, when she was diagnosed but the embryo remained viable.

The next possible treatment is to evacuate pregnancy by curettage and ensure balloon haemostasis from the Foley catheter [3].

In the current situation, the cervical canal is free, the pregnancy being localized intramural, which makes the intervention useless with no way to approach it.

If conservative treatment fails or can’t be applied, hysterectomy can save the patient’s life, even if she loses her fertility. Surgery can be done with classical surgery or using invasive surgery techniques [11, 12].

Using experimental models and techniques of computer simulation [14, 15, 16, 17] in the future could lead to new guidelines for cervical pregnancy therapy.

From the patient’s history, we find out that she had a natural birth and two abortions by curettage. Usually the intramural pregnancy has as a localization the scar after caesarean surgery, but in this case, we can relate to the history of the curettage suffered, which could explain the pathology.

Conservative treatment is the first intention, but in emergency situations when cervical pregnancy puts the patient’s life in danger, hysterectomy is the safest therapeutic way.

[2] “Victor Babes” University of Medicine and Pharmacy from Timisoara, Department of Obstetrics and Gynecology, Timisoara (ROMANIA).