The special role and importance of SMEs in national economies have been largely reflected in a broad scientific literature, as a result of the concerns of theoreticians and practitioners in the field.

The European Union, as an economic and political integrated area, pays special attention because there are approximately 23 million SMEs that comprise 99% of all enterprises and provide most of the jobs in the EU. As a member state in EU, Romania try to encourage SMEs development in each economic branch and has particular policies regarding creation, financing and legislative and administrative support. Present paper tries to highlight the importance of supporting start-ups in Romania; the changes in the economic and financial environment as well as the conditions of setting up new firms.

2. Developments for start-up businesses in Romania

3. Challenges and opportunities for new business in Romania

4. Hierarchy of challenges or external constraints

As a result of the theoreticians and practitioners’ researches. the special role and importance of SMEs in national economies have been largely reflected in a broad scientific literature.

In the paper “Sustainable Entrepreneurship in SMEs: A Business Performance Perspective”, the authors conduct a study that “brings forward the exploration of sustainable entrepreneurship using an important statistical tool which is still less known and valued by researchers in developing countries” and also “stresses the advantages of using PLS-SEM in testing, measuring and evaluating research models in various organizational frameworks” [1].

A research in order to reflect the Romanian SMEs transition to the Knowledge Based Economy (KBE) represents the paper “Analyzing SMEs transition towards Knowledge based Economy: an investigation on the SMEs from the south region of Romania” by Popa [3] which analyzed by implementing “a structured questionnaire on 317 SMEs from the south region of Romania [...]: the importance of acquiring/obtaining, protecting and valorizing the knowledge; increasing the knowledge based as a strategic direction; the importance of intangible assets; the partnership with their key stakeholders; participation in various forms of collaboration between firms; the investments in training; the characteristics of the motivational system; the flexibility of work”.

Berger and Udell (1998) [4] underline the significance of “the ‘life cycle paradigm’ for SME financing decisions” as “bank loans and trade credit account for 70% to 80% of total financing for SMEs, independent of firm size and age” regarding the United States SMEs.

Another research on SMEs financing is that of Huyghebaert and Van de Gucht (2007) [5] which shows an increase use of debt financing for Belgian SMEs start-ups along with the risk of paying back on short notice.

The banking system, on the one hand, still fails to sufficiently understanding on these projects, on the innovative character and the work model with intangible assets. On the other hand, the stock market is inaccessible for this type of investments”.

2. Developments for start-up businesses in Romania

Also, the indicator for Starting a Business component has decreased from 62 in 2017 to 64 in 2018 in terms of procedures, time, cost and paid-in minimum capital.

Considering the competitiveness in Romania analyzed by World Economic Forum thorough “The Global Competitiveness Index 2017-2018 edition” the most problematic factors for doing business are represented by tax rates (13.0), inefficient government bureaucracy (12.9), access to financing and inadequately educated workforce (11.9) and also corruption (11.7) and inadequate supply of infrastructure (10.1) [8].

As answers to the question “What are the three most important funding tools that would have the biggest impact in supporting long-term entrepreneurial initiatives in Romania?” for 2017 there were: government start-ups programs – 23%; European funds – 17% and Business angels– 12%.

Regarding the sector in which the start-ups initiate the business the first four places are occupied by: a) IT, software, internet and tech – 27%; b) media and advertising – 11%; c) services for business – 10% and d) retail or wholesale – 10%.

As a general information concerning the research is that of the 406 entrepreneurs who answered the questions of the Romanian Start-up Business Barometer, 88% of them run businesses less than three years old.

3. Challenges and opportunities for new business in Romania

The Romanian business environment has experienced a series of transformations due to influences coming from politics, the economic sector or the social environment, so that at present, Romanian entrepreneurs who want to open a business must take into account the requirements that have emerged and the implications of these changes, especially on business performance in terms of profitability and relative predictability.

Thus, on a political level, on domestic affairs, it can be highlighted the following threats or challenges: applying changes in the laws of justice with implications on the normal functioning of institutions and fight against corruption at the highest levels; the incorporation and/or political subordination of central and local government officials; the non-implementation in practice of the elements of the governance program promised by the political forces and, in particular, those concerning the implementation of the infrastructure.

At the external level: organizational and institutional reconfiguration of the European Union organisms following BREXIT; important alterations in the reconfiguration of policy power poles worldwide, but especially at regional level; reorienting political actions and decisions across many European countries on migration policy, protecting the domestic workforce, ensuring internal security and borders; constantly struggling to provide vital energy resources for state existence and development.

In the economic field, domestically there are: worsening of some macroeconomic parameters: increasing the level of inflation (5.40% June 2018/June 2017) against a 2.50% target for the inflation rate of the NBR in 2018; declining consumer confidence (from – 12.4 points, in Q1 2017 to – 25.8 points, in Q1 2018); the decrease in the number of employees (from 3.40% in T1 2017 to 2.50% in Q4 2017, annual variation); the increase in unitary cost of labour force (from 9.9 in T1 2017 to 12.5 in T4 2017) [10]; the increase of the RON/EUR exchange rate (from 4.5714 lei/euro to 4.6611 lei/euro) [11]; the sudden changes in the fiscal domain that impinge on the forecasting and budgeting of a business and the more of a start-up; although the increase in aggregate demand can be considered auspicious to ensure economic growth, this should rather be seen as a pressure on the current account deficit as a result of increased imports at the expense of exports; the low level of long-term investment in infrastructure, health, education, and last but not least foreign investment.

At the international level: the process of leaving the European Union of Great Britain and the establishment of new trade agreements; the persistence of low inflation in spite of the expansive measures of large-scale monetary policy [12]; the risk of adopting protectionist policies in world trade and abandoning economic agreements and inter-state cooperation previously assumed; sustainability of public and private debt continues to be an important issue in the EU and the euro area [12].

In the technological field: global trade trends in the context of automation, recommending support for workers who have lost their jobs due to technological change, facilitating employment in emerging industries, promoting labor mobility in the EU, and improving economic growth inclusive [12] (rap on the stability of the NBR June 2018); the emergence of technology innovations in financial and virtual coins.

The opportunities are also reflected on the same level, and although they are presented to a lesser extent, they have a bearing on the start of a business.

In this respect, the political field is highlighted by: the survival in the structures and bodies of the European Union and NATO. In the economic level: the increase of economic growth of 6.9% in 2017; aggregate demand growth, but only to the extent of increasing demand for domestic products; the continuation of the possibility to ensure the financing of investment projects by domains established through the European structural and cohesion funds provided by the European Union; a reduction in income tax as of 1 January 2018 from 16% to 10% for all categories of taxable income, except for dividend income for which the 5% quota is retained; the full passage of mandatory social contributions to the pension fund and social health insurance for the employees, the calculation and the withholding of the employer’s return; the existence of exploitable natural resources with advantageous opportunities for foreign investors and with impact on the Romanian investors through the phenomenon of diffusion of effects and mobilization of resources.

In the social field: the need to attract well-trained human resources professionally through appropriate benefits; the possibility of improving the employees at the workplace or through specialization courses.

Regarding technological level: unrestricted and increasingly widespread access to the Internet and social media through increasingly advanced technologies; bringing new and performing technologies together with foreign investments made in different regions of the country.

4. Hierarchy of challenges or external constraints 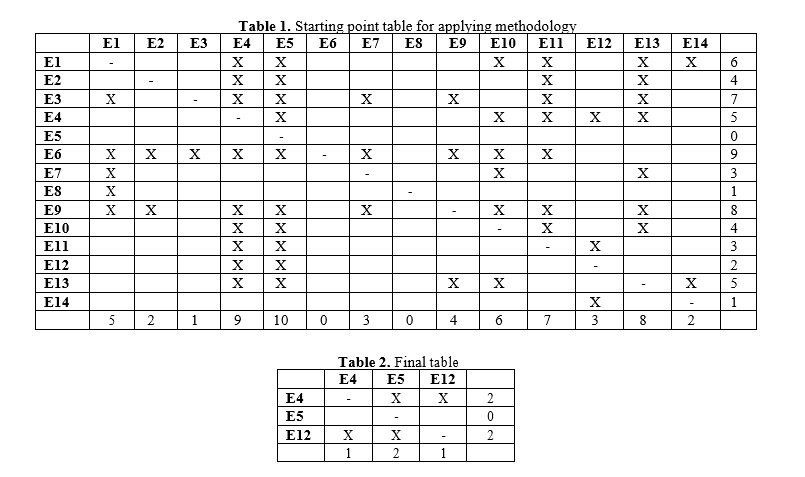 This constraint E6 not only influences all the rest of them but is the main obstacle in trying to be aware of signals of the economic environment and to reduce some negative ascendancies of external constraints.

The Romanian business environment has experienced a series of transformations due to influences coming from politics, the economic sector or the social environment, so that at present, Romanian entrepreneurs who want to open a business must take into account the requirements that have emerged and the implications of these changes.

After highlighting the importance of supporting start-ups in Romania and also the changes in the economic and financial environment as well as the conditions of setting up new firms, the author applies his own methodology in order to show some important challenges (external constraints) for an entrepreneur to create a start-up.

Applying the methodology, the author obtains a string of results as external constraints in their order of importance, from the most to the less important one, and so, the constraint E6 is shown as the most important and not only influences all the rest of them but is the main obstacle in trying to be aware of signals of the economic environment and to reduce some negative ascendancies of external constraints.

Per acquistare i Proceedings clicca qui: