Fibroids (leiomyomas) are benign, smooth muscle cell tumours of the uterus. The diagnosis of fibroids in pregnancy is neither simple nor is it. We suggest examining the association of fibroids with specific adverse pregnancy outcomes. We present the clinical, obstetric data and perinatal outcomes of thirty different pregnancies from a prospective study.

Nineteen patients were diagnosed with fibroids before term, the average age being around

35.10 years. Average fibroid size was 2.5cm; more than half of them were IGIP. Seven patients had history of pregnancy loss. Fibroids were found to be submucosal in twelve of the participants, subserosal in ten of them, and intramural in eight. Most common location of fibroids was on the anterior wall of the uterus. History of my omectomy or uterine artery embolization was present in a small number of cases. The most common complications encountered during pregnancy in decreasing order of frequency were: difficult caesarean delivery, imminent abortion, imminent uterine rupture, premature rupture of membranes, abortion and hysterectomy. Caesarean section was done in 87% of women and 30% of them went through technical difficulty during caesarean section. We observed a linear correlation relating to the fibroid size in the first and third trimesters. We demonstrated an inversely proportional correlation between gestational age or foetal weight and fibroid size in the third trimester.

Women should be explained that the risks of obstetrical complications are increased with the presence of fibroids during pregnancy. Neither size nor location can adequately predict additional adverse outcomes [1]. Uterine fibroid prevalence in pregnancy is reported to range from 0.1% to 3.9% [2]. Research notes that the chances of miscarriage are doubled in women with fibroids. Most fibroid growth occurs in the first three months [3]. Throughout pregnancy, approximately 60% of fibroids will increase by greater than 10% of their original size.

Women with uterine fibroids are more likely to have their pregnancies complicated by fetal malpresentation, preterm birth and premature rupture of membranes (PPROM), placenta preavia, placental abruption, caesarean delivery, and severe postpartum haemorrhage [4]. In addition to that, neonatal birth weight at delivery was shown to be lower. As fibroid size increases, likelihood of vaginal delivery decreases. These complications are more commonly seen with large submucosal fibroids [3]. Due to risk of the afore mentioned complications, pregnancy with fibroids has been a researched topic for many years.

This prospective study was planned to assess obstetric outcomes of pregnancies with uterine fibroids. Additionally, we wanted to find a possible correlation between the complications mentioned above and fibroid growth during pregnancy.

We conducted this study consisting of thirty cases of fibroids associated to pregnancy, which took place within Dominic Stanca Hospital, in Cluj Napoca. The participants gave their written consent to this trial, in addition to agreeing verbally. The age of the participants ranged from twenty-six to fourty-six. They underwent both consequent prenatal care and delivery at the institute. Full patient history, clinical examination, and demographic data were recorded.

Observations of patients till the end of puerperal period were also documented. The maternal and foetal parameters we used are described in table 1. All participants undertook ultrasonographic examination then repeated in every antenatal care with detailed obstetric report containing comments on any concerning episodes related to characters of the fibroid such as size, number and place. Measurements at twelve-sixteen weeks were used as reference and compared to those which were taken at twenty-two to twenty-six weeks and twenty-eight to thirty-four weeks of pregnancy.

Majority of the patients (11/19) had the prenatal diagnosis of fibroids, eleven participants being diagnosed during the first trimester of pregnancy.

Qualitative variables were expressed such as frequency and percentage, compared using the Pearson χ2test. Quantitative variables were expressed as mean ± SD and compared using the Student-test. In order to study the medians of gestational age and the baby’s birth weight/foetal weight, we used the Kruskal-Wallis test, which is a non-parametric method indicating that at least one sample stochastically dominates one other sample. P<0.05 was considered statistically significant.

History of pregnancy loss was present in seven of the patients (23.33%) and only one pregnant woman had given birth to a dead baby. Fibroids were found to be submucosal in twelve participants (40%), subserosal in ten of them (33.33%), and intramural in eight (26.66%). The most common location of fibroids was on the anterior wall of the uterus with a percentage of 36.66% (eleven participants), followed by praevia location (30%, nine participants). Around 23.33% (seven patients) had an isthmic location of fibroids. Only three cases (10%) were found at the fundus.

Amongst the women suffering from uterine fibroids, 83.33% (twenty-five patients) had no prior uterine surgical intervention. Additionally, only one participant (3%) underwent uterine fibroid embolization for symptomatic leiomyma.

The most common indication for primary caesarean delivery was labor dystocia.

The occurrence of fibroid complications is described in Fig. 2. In 18% of cases, the presence of uterine fibroids did not affect the path of pregnancy and labor in any way. In 30% of cases, caesarean delivery was performed with difficulty.

Fibroids dramatically enlarge during initial pregnancy. In Fig. 3, we observe that in pregnant women fibroid growth has a linear fashion (r=0.82; P=0.0001), most of the growth occurring during the first trimester. 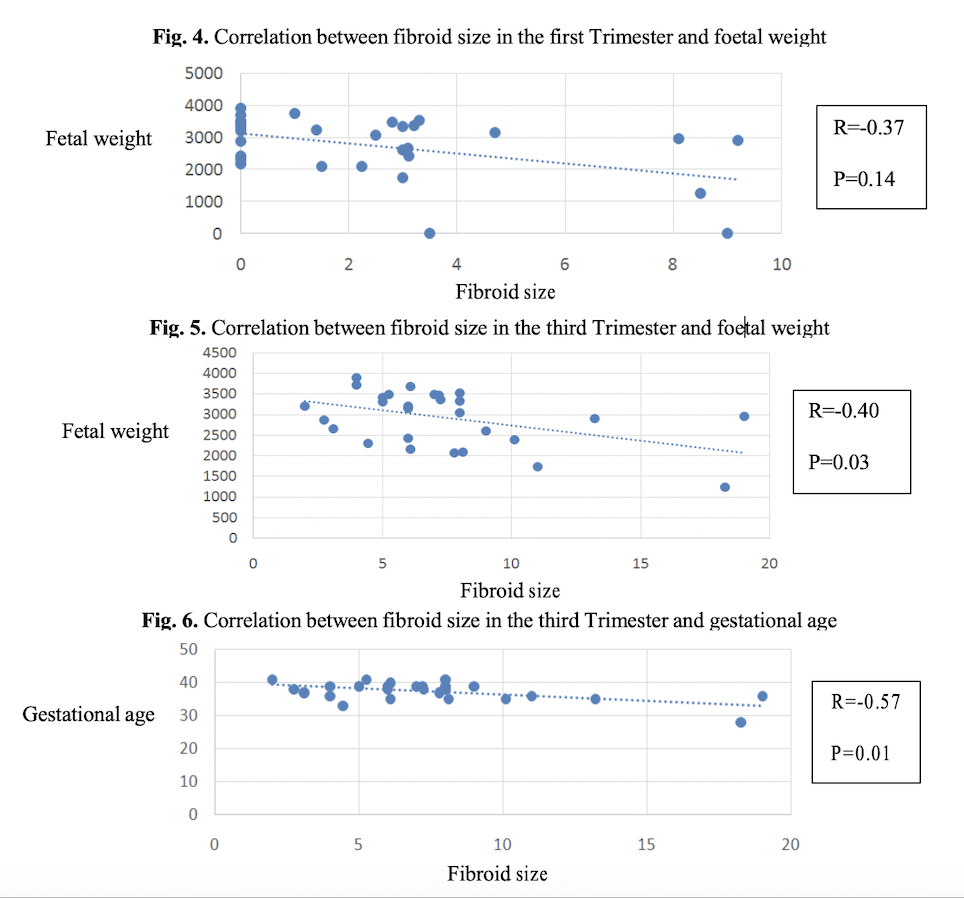 A comparison between median gestational age or median foetal weight in relation to uterine fibroid location or the fibroid type is shown in Figure 7, 8, 9 and Figure 10 respectively. The Kruskall-Wallis test assessed no statistical significance difference between the median values of any kind.

This study was conducted to evaluate the outcome of pregnancies disrupted by leiomyomas. Benaglia et al., reported significant fibroid growth during early pregnancy and proved human chorionic gonadotropin to be an important contributing factor [3]. The same study reported that fibroid enlargement during pregnancy may not be linear.

A large size of fibroids has been associated with increased admissions for postpartum haemorrhage [5]. In 4% of our cases, we had to perform emergency hysterectomy hence the severe bleeding.

The rate of caesarean section in pregnancies associated with uterine fibroids ranges between 34% and 73%. Various studies reported that multiple, large fibroids located especially in the lower uterine segment are predisposing factors for caesarean delivery [6] which was the case for all twenty-six patients from our study.

More specifically, submucosal and intramural fibroids have notably higher rates of spontaneous abortion [7]. In our study, 7 out of 30 patients (23.33%) had abortion, all of them being diagnosed with submucosal uterine fibroids before pregnancy. Praevia location of fibroids was found in five of them, which is in agreement with results from earlier studies [8].

There is currently a lack of large, randomized, and controlled studies regarding the safety and efficacy of myomectomies during pregnancy and caesarean sections [7]. Our study as well as a previous one [9] showed that myomectomy performed for fibroids in appropriate locations did not increase post-operative bleeding or maternal morbidity or mortality.

In this study we did not focus on women achieving pregnancy through IVF (In vitro Fertilization). In consequence, we could not obtain precise data on the presence and dimension of the fibroids immediately before the advent of pregnancy. The average age of our patients was 35.10 years and 53.33% of them were IGIP, which suggests a difficulty in obtaining a pregnancy. A previous study showed that removing the fibroids can increase the pregnancy rate from 25% to 42% [7].