Endometriosis is defined by the presence of endometrial stroma and glands outside the uterine cavity. Besides the classic pelvic location, endometriosis can be diaphragmatic, intestinal and pleural. A clear prevalence of endometriosis cannot be established due to asymptomatic or non-specific symptoms, being estimated to be 1-7%. Among the known risk factors are multiparty, prolonged lactation and late menarrh. Even if it is a benign pathology, the presence of an associated risk of developing an associated ovarian, breast or hematopoietic cancer requires clarification of the pathophysiology of endometriosis. The implication of heredity is argued by the importance of family history among risk factors that increase the risk of endometriosis over 6 times. At least 6 genomic regions statistically associated with endometriosis have been identified along with a number of mutations and lesions in the pro-oncogenes of ARID1A, PIK3CA, KRAS, and PPP2R1A. Future studies are needed to analyze the gene expression difference in epithelial and stromal cells and the correlation with the aggressive manifestations of deep endometriosis. Further study of the pathogenesis of endometriosis, namely genetic factors along with the ectopic endometrial tissue, modified immunity, proliferation of affected cells and apoptosis, abnormal endocrine signaling can lead to the possibility of an early prediction and prevention thus avoiding the need for surgical diagnostic and therapeutic intervention resulting a significant improvement of the quality of life.

The estimated prevalence of endometriosis varies significantly among studies, being estimated to be from 1-7% to 20-50%. The real prevalence remains unknown, the great majority of asymptomatic cases remaining undiagnosed.

The main risk factors considered to be implicated in the pathogenesis of endometriosis are illustrated in Fig. 1.

The pathogenesis of endometriosis is not known, but reference theories mention retrograde menstruation, altered immunity, metaplasia of the germinal epithelium, and metastasis.

Recent research has also suggested that the disease could be of genetic origin or due to abnormalities in the stem cells. Studies on families and twins strongly support the existence of a hereditary component, but no specific gene has been identified, and genetic tests are currently unavailable (3). The results of the genomic-wide association study (GWAS) (4), the results of which we will mention forward, support the inherited component of the disease.

The mechanism known until now is the inflammatory response additional to the implant of endometrial cells, above this a series of other processes are thought to be implicated, like altered immunity, abnormal cellular proliferation, abnormal apoptosis, and abnormal endocrine signal.

Summarizing, we can say that the genetic factors that determine the phenotype of endometrial cells capable of ectopic implantation, but also immunological and endocrine factors have a defining role in the pathogenesis of endometriosis (5).

Several uncertainties that further justify the importance of the genetic factor in the development and evolution of endometriosis are the fact that the first-degree relatives of the affected individuals have an increased risk of developing this disease and the severity of the disease is directly proportional to the level of genetic transmission, being more severe in successive generations.

Endometriosis susceptibility sites have been identified on the short arm of chromosome 7. Studies that associate the genome with the disease have identified variations in the DNA of affected women predisposing them to the development of endometriosis (5).

The most relevant mutations for endometriosis are Single Nucleotide Polimorfism (SNP), where enzymes involved in estrogen metabolism undergo SNP point mutation, resulting in either increased or decreased enzyme function.

The COMT (Catechol-O-Methyl Transferase) enzyme, which enzymatic functions are implicated in the metabolism of the dopamine, norepinephrine, epinephrine and estrogen neurotransmitters in phase II hepatic metabolism, is known to decrease in the presence of Val158Met mutation to 50% in heterozygous form and 25% homozygous (6).

Cyp1B1 has the function, in addition to estrogen metabolism in the degradation of aromatic hydrocarbons in fried meat, so who has these mutations should not overload an enzyme with low function due to mutations with an unnecessary metabolic burden. Also, even without these mutations on CYP1B1, it is good not to overload this enzyme with degradation of fried meat metabolites in the context in which this enzyme needs to degrade especially estrogen (3).

It is considered that the best variant of COMT is in the heterozygous form, which provides a medium enzyme velocity and allows good tolerance to the intake of methyl groups (methylfolate, methylB12, TMG) that are required for all reactions of MT type (methyltransferase – HNMT, COMT, SHMT etc). For endometriosis, the presence in the homozygous form of the COMT V158M mutation brings a clear disadvantage in the degradation of estrogen metabolites (7).

The presence of mutations in the pathways of estrogen metabolism will result in the accumulation of this hormone and its intermediate metabolites, with the occurrence of phenomena of estrogenic dominance. In the absence of predictive methods and early diagnosis of endometriosis, would be required an administration protocol of oral contraceptives pills (8). The use of estrogen in combination contraceptives in people who have mutations leading to the accumulation of estrogen metabolites is a risk factor for endometriosis and thrombotic complications. 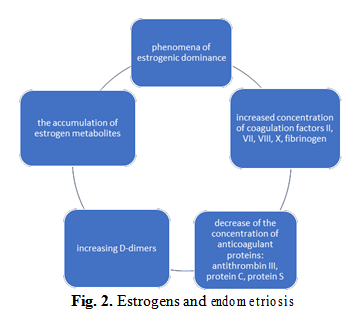 As mentioned previously, genetic mutations in enzymes involved in estrogen metabolism positively influence the development of endometriosis. Phase I occurs at the cytochrome P450 (CYP enzyme) where liposoluble estrogen molecules are converted by hydroxylation reactions into less soluble and water-soluble molecules, with the formation of very oxygen- free radicals.

In metabolic phase II metabolites will be methylated by the COMT enzyme and conjugated to glutathione by the enzymes Glutation ST transferase with the formation of water-soluble molecules that can be removed by bile and urine (9). CYP1B1 is the major enzyme that catalyzes conversion:

Variations in this gene are associated with increased CYP1B1 enzyme (upregulation).

Genetic risks are due to mutations on the CYP1B1 allele that increase enzyme activity because enhanced enzyme function will increase the synthesis of 4HOE1 and 4HOE2 that are carcinogenetic substances involved in the etiology of estrogen-dependent cancer.

An even more dangerous combination is represented by the association of the genetic mutations of thrombophilia with genetic mutations of endometriosis, and blind administration of combined oral contraceptives that further amplifies this already dictating cocktail of an unfavorable prognostic by the occurrence of complications as presented in the figure 4 below.

For the normal functioning of the COMT enzyme, a sufficient number of cofactors is needed. Hereditary thrombophilias by MTHFR 677 or 677 and 1298 mutations lead to decreased methylfolate synthesis, with decreased S-adenosylmethionine synthesis (SAM) (10).

The mutation MTHFR 677 aggravates the evolution of endometriosis by the deficient synthesis and estrogen degradation deficiency at COMT level due to the lack of SAM.

Genetic testing is required, but only possible in US laboratories. It can provide the specific knowledge of the present mutations with adapted and personalized treatment, respectively, compensation and control of their own metabolic mutations.

One of the most important study regarding the implications of genetics in endometriosis is “Genetic variants underlying risk of endometriosis: insights from meta-analysis of eight genome-wide association and replication datasets” (Rahmioglu N, Nyholt Dr et al., Hum Reprod Update. 2014 Sep-Oct; 20(5): pp. 702-16). These series of meta-analyses that included a grandious number of 11506 cases highlighted the presence of genome variant associated with endometriosis stage III/IV, loci and inter-genic loci with significant association with endometriosis, but the conclusion requires functional studies in relevant tissues that are needed to understand the effect of the variants on downstream biological pathways. With a lower number of participants, but also important, respectively 998 laparoscopically and histologically confirmed endometriosis cases and 783 disease-free controls, in 2015, Sapkota Y et al., (7) find three coding variants in GREB1 (near rs13394619) and CDKN2B-AS1 (near rs1537377) significant associated with endometriosis.

Studies that are important to mention is the study of Zondervan KT et al., (2016) (8), that aimed the discovery of novel, targeted treatments by a global standardization initiative; Dawson A et al., (9), starting from the idea that endometriosis may represent a benign neoplasm that invades locally but rarely metastasizes, in 2018 publish a study regarding the endometriosis associated cancer and the molecular mechanisms implicated.

Endometriosis is the result of the development of ectopic endometrial cells implanted additional to the inflammatory response developed (10). Pathogeneses are multifactorial.

According to the latest studies and meta-analyzes genomic regions associated with endometriosis have been identified. Somatic mutations and mutations of pro-oncogenes have been identified in 79% of cases of deep endometriosis, explaining the aggressiveness of this form of disease. Subsequent studies are imperative in order to elucidate the role of genetic alterations in the evolution of endometriosis. The last decade has seen significant progress in understanding the bases of endometriosis, yet the pathophysiology and genetics of endometriosis remain incomplete elucidated (11). Long-term goals in discovering the genetic basis of endometriosis are early detection and improved treatment of associated symptoms, including infertility and pelvic pain. GWASs can provide a perspective on gene-environment interaction and identify candidate genes that are associated with endometriosis. Further replication studies that can confirm the presence of similar associations in the general population are required. The totality of studies in this direction is aimed at assessing individual risk of endometriosis and providing advice on early treatment to prevent the consequences of this pathology, such as infertility.

Genetic diagnostic tests of endometriosis and specific genetic therapies provide the opportunity to diagnose and treat early women and allow the doctor to advise patients on prognosis.