The article is an exposure of data and literature studies related to minimally invasive surgery as well as our experience at the Gynaecology Obstetrics Clinic of Sibiu County Emergency Clinical Hospital. We have obtained a record of laparoscopic interventions performed in pregnant women in Sibiu County Emergency Clinical Hospital. Of these, only the cases with gynaecological pathology associated with pregnancy were evaluated, for which laparoscopic surgery was required. The pathology associated with the surgical interventions was: voluminous ovary cyst with torsion tendency and ovary and Fallopian tubes torsion.

The most common pathology for surgically laparoscopic surgery was acute appendicitis. The gynaecological pathology for which our clinic intervened was the twisted voluminous ovary cyst. All the pregnant women in our clinic had a favourable postoperative evolution.

0.75%. [2] The indications of minimally invasive surgery are constantly increasing both in general and genital surgery pathology as well as in pregnancy. The advantages of laparoscopic surgery are small incisions in the abdominal wall, decreased pain and discomfort after surgery, the rate of postoperative complications is lower, lower postoperative morbidity, involves a small amount of post-operative analgesia, fast resumption of intestinal transit, short-term inpatient and rapid socio-professional reintegration. [3], [4]. The most frequent laparoscopic surgery performed in pregnancy is cholecystectomy. In recent years, the number of cases of ovarian torsion, ovarian cystectomy, appendectomy operated in pregnancy has also increased. 20% of adnexal torsion occurs in pregnancy because pregnant women are predisposed to this. [4], [5], [6] The frequency of ovarian cyst in pregnancy after 16 weeks of gestation is between 0,5% and 3%. The ovarian cyst from the first trimester of pregnancy are often functional. However, ovarian cyst rupture in pregnancy is very rare. [7].

Laparoscopic surgery in pregnancy, in addition to its advantages, presents a number of risks for both the mother and the fetus. Maternal and fetal risks depend on the stage of the pregnancy. In the first trimester of pregnancy, the most common complications are teratogenesis and miscarriage. [8], [9], [10]. In the second trimester of pregnancy, teratogenic risk and abortion are minimal compared to the first trimester, and the pregnant uterus is small enough to allow laparoscopic access to the abdomen. In the third trimester of pregnancy there is a risk of premature birth, and it is also risky for the mother because the uterus occupies the entire abdomen, thus limiting the laparoscopic approach. Taking these risks into account, the second trimester is the safest for laparoscopic surgery. [8], [11]. Until recently, the main risk of laparoscopy in pregnancy is to reduce uterine blood flow secondary to intra-abdominal pressure. At present, studies show that hemodynamic changes are similar to those observed in nonpregnant women. [12]

The article is an exposure of literature data related to minimally invasive surgery as well as our experience at the Obstetrics Gynaecology Clinic of Sibiu County Emergency Clinical Hospital.

We have obtained a record of laparoscopic interventions performed in pregnant women in Sibiu County Emergency Clinical Hospital. Of these, only the cases with gynaecological pathology associated with pregnancy were evaluated, for which laparoscopic surgery was required. The pathology associated with the surgical interventions was: voluminous ovary cyst with torsion tendency and ovary and Fallopian tubes torsion.

However, the literature data highlights the superiority of laparoscopy in pregnancy compared to laparotomy. There has been an increased number of complications in laparotomy compared to laparoscopic surgery. [15] Reports of fetal demise after laparoscopy continue to occur in the literature, although laparoscopy is generally accepted as safe. Laparoscopic surgery can be safely performed on pregnant patients during any trimester, without an appreciably increased risk to the mother or the fetus according to a series of studies from the literature. [16], [17]. The most significant threat to the fetus in the management of acute maternal intra-abdominal disease is represented by the preterm labor and delivery. The severity of the disease process appears to be a major determinant of that risk but the available data are insufficient to quantitate the risk. [18]

Abortion, premature spontaneous birth, and intrauterine death of the foetus, cited as complications of laparoscopic surgery, are directly related to the progression of associated pathology, independent of surgery. For example – one of the frequent indications of laparoscopy in pregnancy – acute appendicitis – has a poorly suggestive clinical picture by altering the position of the appendix, the physiological increase of leukocytes in pregnancy with often late diagnosis in complicated forms. The incidence of miscarriage is 1.5% in uncomplicated appendicitis and 35% in perforated appendicitis.

Similar abortion is 4% in cholecystectomy during pregnancy for lithiasis cholecystitis and 60% in biliary pancreatitis. [19]

A comparative study on fetal prognosis on laparoscopy in pregnancy, laparotomy in pregnancy and general population (2.015 deliveries), who tracked after surgery the following parameters: weight at birth, duration of pregnancy ,intrauterine growth retardation ,intrauterine death of the foetus ,foetal malformations pregnancy shows an increased risk of foetal weight (below 2,500g), birth before 37 weeks, and an increase in the incidence of intrauterine growth retardation compared to the general population. There were no statistical differences between laparoscopic surgery, laparotomy and the general population on: foetal survival at 1 year (odds ratio 0.85, 95% confidence interval 0.48 to 1.51), the frequency of foetal laparoscopic malformations (risk ratio 1.09, 95% confidence interval 0.90 to 1.11), laparotomy (risk ratio 1.08, 95% confidence interval 0.85 to 1.11). The conclusion of the study was that there is no significant difference in the 5 parameters observed for laparoscopy or laparotomy in mono-foetal pregnancy in gestational pregnancies between 4 and 20 GW. [20]

Another study that included 36 cases of ovarian cystic tumours ,8 cases of broken or torsional ovarian cyst, 3 cases of symptomatic pelvic tumours, 2 cases converted to laparotomy for adherent syndromes or haemorrhagic complications shows that no patient experienced postoperative surgical complications and there was only one case of spontaneous abortion after laparoscopy. The average length of hospitalization was 3.6 days. [21]

We had 8 cases of symptomatic ovarian cysts during pregnancy between 2016-2018 in Obstetrics Gynaecology Clinic of Sibiu County Emergency Clinical Hospital. The first case in 2016. In surgery department – acute appendicitis during pregnancy and exploratory laparoscopy in car accidents were performed. The first case we had in 2016 – a 35-year pregnant woman, in the second trimester of pregnancy (16 weeks of gestation), showed up in the clinic accusing violent pain in the right flank and hippocampus. The ultrasound examination revealed a tumour, 16 cm/9 cm dimensions, in the right side of the uterus and with benign ultrasound features.

Tumoral marker CA 125 was performed which was within normal range. Laparoscopy was performed. Surgical approach with 4 cannulas: 10 mm above the umbilic in left and right iliac troughs with 5 mm cannula and 10 mm in the lower abdomen. Pneumoperitoneum was created with a working pressure of 12 mmHg. When exploring the abdominal cavity, a large torsional ovarian cyst was observed. Fig. 1 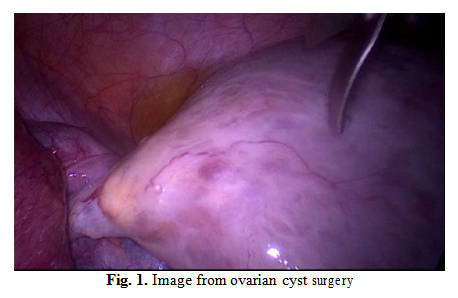 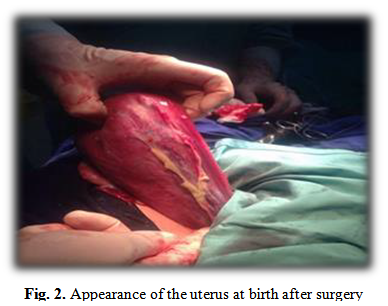 Laparoscopy is a safe treatment method in pregnancy that is associated with reduced maternal and foetal complications. It also reduces hospitalization time, pain after surgery and maternal mortality and morbidity.