There is still an increased incidence of acute and chronic otitis media complications in children.

We conducted a retrospective study over a 4-year period (October 2013-October 2017), which included children between the ages of 10 months and 15 years old, who were diagnosed with complicated otitis media and underwent surgery in the ENT Clinic from the Clinical Rehabilitation Hospital in Iasi. For documenting the study, we used the information in the patient’s medical files and from the surgery logs.

There were 21 children who had otitis media complications, out of which 15 (71.4%) presented with BTE abscess/externalization, 3 (14.3%) had lateral venous sinus thrombosis, 1 pacient (4.8%) was diagnosed with facial palsy, 1 child (4,8%) had temporal-zygomatic externalization, and another child (4.8%) had a cerebral abscess and otogenic meningitis. The diagnosis of latent otomastoiditis was established in 28,57% of the children. The pathogenic agent was identified in otic secretions in 8 of the cases. Five patients were diagnosed with serous or sero-mucous chronic otitis media in the other ear. All the children who were included in the study underwent surgical treatment, for which we performed atticoantrostomy and mastoidectomy (71,42%), radical mastoidectomy (28,57%). The child with the cerebral abscess was transferred in the pediatric neurosurgery department. Seven children were also diagnosed with adenoiditis, which were later surgically removed. All the patients with complications recovered well, without any neurological deficiencies.

Aggressive antibiotic therapy and managing the cases by combining otologists and neurosurgeons are the key to reducing morbidity and mortality of serious complications of otitis media. A special mention should be made about the increased incidence of latent mastoiditis which first manifested itself through the complication it caused.

Incorrect antibiotic treatment and the appearance of multiresistant germs can encourage the appearance of complications and also can mask clinical symptoms, sometimes even showing atypical manifestations, and even leading to a delay in diagnosis.

The study proposes the identification of determining factors of complications of otitis media, as they are very frequent.

We made a retrospective study on a 4-year period (October 2013-October 2017) which included children from 10 months to 17 years old, who were diagnosed with otitis media complications and underwent surgery in the ENT Clinic from the Clinical Rehabilitation Hospital in Iasi. For documenting the study, we used the information in the patients’ files (otomicroscopic examination, CT scans, tonal audiograms, laboratory results: hematology, ear secretions, TEOAE, tympanogram, cVEMP) and from the surgery logs (the surgical intervention type). The criteria for including the patients were: age under 18, suspicion of acute or chronic otitis media with local and regional complications which needed surgery. Children with cholesteatoma were excluded from the study.

21 children had complications of acute otitis media (61,9%) and chronic otitis media (38,1%). Thirteen children were from the urban area and 8 were from the rural area. Most children were male (80.95%). From the children we included in the study, 14 (66,66%) presented with behind the ear abcess, 3 (14,3%) with lateral venous sinus thrombosis, 1 (4.8%) was diagnosed with facial nerve palsy, 1 (4.8%) had temporo-zygomatic exteriorization, 1 (4.7%) had a right temporo-parietal epidural abcess and otogenous meningitis and 1 patient with cerebral abcess and otogenous meningitis. 61,9% of the children in the study came to our clinic by being transferred from other hospitals (Fig. 1). 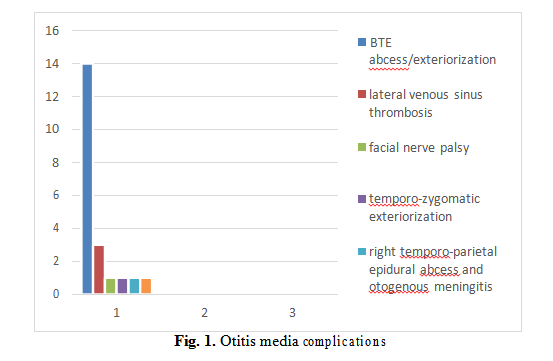 Diagnosis of latent mastoiditis was established for 28,57% of the children. In 52,28% of the cases, the patients had a history of recurrent otitis media. Before being admitted to our clinic, 15 of the patients (76,2%) were put on antiobiotics. For 6 of the children, only 1 antibiotic was used, and for the others, we used 2 to 4 antibiotics (Table I). 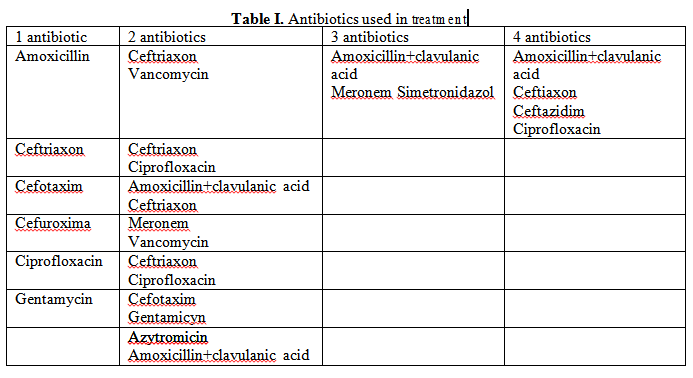 Ear secretions were collected from all the patients, and in 8 cases, the pathogenic agent was discovered (Table II).

All the children included in the study underwent surgery for which we practiced the following techniques: mastoidectomy with atticoantrotomy for 15 of the patients (71,42%) (out of which: for 4 patients we performed a posterior tympanotomy and placed a trantympanic grommet, for 5 children a ventilation tube was inserted through the tympanic membrane and for one patient we also performed a tympanoplasty) and canal-wall down technique for 6 patients (28,57%). Also, antibiotics were included or continued to be administered to the patients. In 3 cases it was necessary to associate antibiotics: vancomycin and ceftazidime, vancomycin and meropenem or vancomycin and ceftriaxone.

The child with the brain abcess was transferred to a pediatric neurosurgery department after we resolved the ear infection.

Besides the complicated otitis media, some of the children in the study also presented with other ENT pathologies. Five of them were diagnosed with otitis media in the other ear out of which: 3 were serous otitis media, one seromucous otitis media and an acute presupurative otitis media). 6 patients were diagnosed with adenoid hypertrophy. 2 children had chronic inflammation of the adenoids and chronic tonsillitis, chronic hypertrophic inflammation of the tonsils, and one patient had bilateral subacute etmoidal-maxillary sinusitis, chronic pansinusitis, and chronic maxillary sinusitis on the side of the affected ear (Table III).

For 7 children who had adenoid hypertrophy, we performed adenoidectomy.

Alongside the ENT associated pathology, 2 patients were also diagnosed with insufficient growth in height and weight and infectious diseases (chickenpox and rubella).

The bloodwork showed that more than half of the children (57.14%) had an anemic syndrome, and 2 patients who were under antibiotic treatment (Vancomycin and Ceftriaxone) before admission to the hospital, also had hepatocytolisis.

All patients recovered well, without any neurological deficit.

Other authors have presented cases of facial palsy as a complication of otitis media (1).

After analyzing the results, we got from the microbiological examination of the ear secretions, we did not notice wether a certain germ was more prevalent than the others.

Sensorineural hearing loss secondary to penetration of toxins or bacteria in the inner ear structures represent also an important complication of chronic otitis media that still preoccupies ENTs (2, 3). Unfortunately, not all children with chronic otitis media are evaluated audiologically in a timely manner. In this regard a special category of patients is represented by children with chronic otitis media and bilateral profound sensorineural hearing loss that require cochlear implantation. These particular pathology represents a challenge for the surgeons due to the possible spread of infection with consequent meningitis, risk of electrode array extrusion, recurrence of the otitis and, as well, the risk of biofilm formation that sometimes may impose cochlear explantation (4, 5).

Several surgical techniques were proposed (6, 7), all of them having pros and cons so, each patient’s management should be judged separately when it comes about cochlear implantation (8).

As a result of an incorrect utilization of antibiotics on a large scale (in means of duration, dosage, type of antibiotic) for treating otitis media in children, the complications that may occur are freqeuent, some having a lethal risk such as meningitis, brain abcess or cerebellum abcess, epidural abcess, sigmoid sinus thrombosis and some can be invalidating: facial nerv palsy.

Complications of otomastoiditis result from the initial infection directly expanding beyond the mastoid bone, blood dissemination or though bone erosion. A special mention needs to be made regarding latent mastoiditis which first manifested as the complications itself. The surgical technique which was used was the closed one in order to clear the mastoid infection and reconstruction in order to preserve hearing (tympanoplasty) when it could be done.