Non-Hodgkin’s lymphoma is a multiple-site disseminated affection where latero-cervical adenopathies are common and can be of significant size. It affects men more frequently, with the most affected age being 15-40 years or 55 years. There are also some onset modalities that can be assigned in the context of other conditions. Onset with rhino-sinusal symtoms may direct diagnostic investigations into other conditions, such as a rhino-sinusal tumor. Clinically, it is difficult to address these conditions, leaving few specificity criteria for fitting into one of these clinical entities. In this context, more invasive investigations are those that put the diagnosis of certainty.

Non-Hodgkin’s lymphoma is the multidisciplinary disseminated disease requiring a balance similar to other hematopathy. The incidence is 20 per 100,000 inhabitants, being 5 malignant disease.

Often in the ENT sphere, the reasons for the presentation are important adenopathies, some of which are impressive. At the time of presentation, 70% of patients with cervical adenopathy.

There are situations, about 10%, in which the onset is without adenopathies being interested in nasopharyngeal, oropharyngeal, intestinal tract, skin or skeleton. Presentation at the doctor is often caused by pain. Adenopathies, but also in other locations. Painful adenopaties, sometimes accentuated by alcohol consumption, may be the reason for the presentation.

Adenopathies may be painless, firm, mobile and may appear in groups or blocks. They can vary in volume and consistency, claiming incorrect diagnoses.

The onset of debut may be a prerequisite for framing symptoms in the context of other conditions, such as a rhino-sinus tumor. Epistaxis, exophtalmia and nasal obstruction may be the onset of such a condition and the reasons for bringing the patient to the doctor.

A lymphoma that invades the orbit, the rhino-sinus region, the etmoid and the base of the skull can generate these symptoms.

The Cranio-Cerebral MRI+CIV Radiographic Imaging Result, which led to the patient’s referral to the ENT service: Extensive T2, T1, moderate hypertension STIR, FLAIR, with intense contraction, located extracoanally at the inferior-internal angle of the right orbit; the formation extends intracranially through the optic hole and reaches to the right cavernous sinus.

The formation has a maximum size of 24/28/13 mm, the look described could be a neurinoma/schwanom lesion, difficult to appreciate on purchased sequences. Ethmoidal and right sphenoid sinusitis, rhinopharyngeal infiltration on the right, middle right meatus is obstructed by a moderate contrast tissue tissue mass. 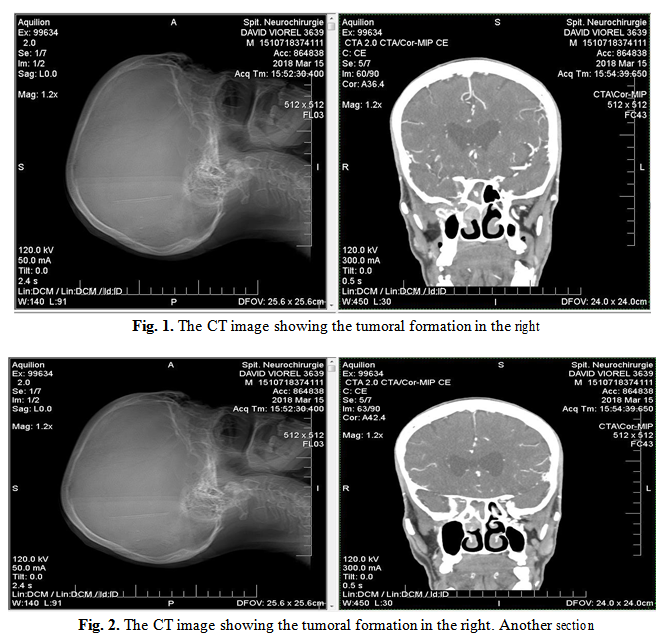 The patient presented the right exophthalmia at the clinical examination. In anterior rhinoscopy, the infiltro-proliferative process in the right nasal fossa, boselat, which carries a quasi-complete nasal fossa covered with mucous secretions. Without laterocervical adenopathies or other localizations, serous chronic otitis, bilateral hypoacusis. 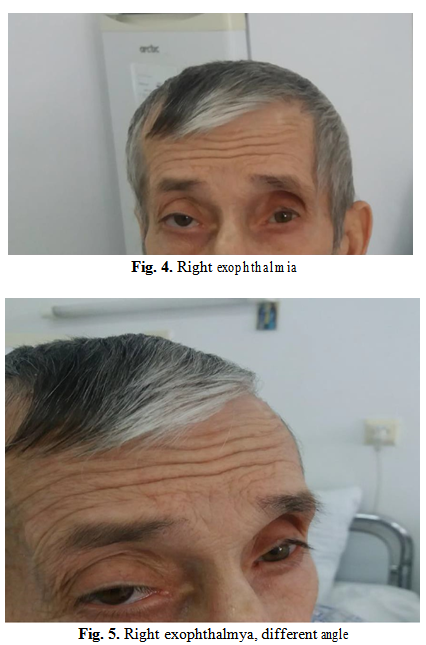 The videofibroscopic examination revealed the tumor formation on the posterior wall of the rhinopharynx with a bosel contour covered with serum secretions. 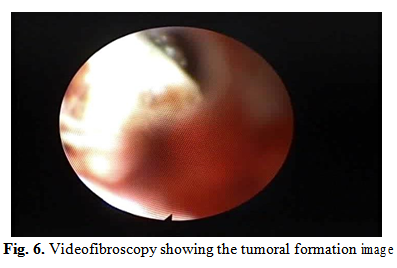 In the current clinical and paraclinical context, differential diagnosis is difficult. Practically any tumor formation (neurinoma, schwanoma, already suspected, scuamocellular carcinoma, basal cell, rhinopharyngeal carcinoma etc.) can be discussed, clinical symptoms and clinical investigations so far it has been unable to provide specific data for the diagnosis of certainty.

The particularity of the case presented is that the patient had extensive tumor involvement, a non Hodkin lymphoma, in the orbit, etmoid and the base of the skull. ENT involvement was reduced, but the tumor was more accessible for biopsy through a rhinology approach. The patient may present for nonspecific symptoms sometimes attributed to pathologies in other specialties. (In this case initial presentation at neurosurgery).

Even in the field of ORL, the non-specific symptom lends itself to more specific investigations for determining the type of lesion (CT, MRI, immunohistocompatibility).

Biopsy remains the gold standard for the diagnosis of certainty.