Uterine fibroid represents one of the most common benign gynecological pathologies, whose causes of development are still incompletely elucidated. One of the predisposing factors, quoted in the literature, is hormonal disturbances, namely the high level of estrogen and low progesterone. The level of these hormones is influenced by age, body mass index and urban and rural areas inhabitants.

In this paper we tried to see if the appearance of uterine fibroid is influenced by these parameters.

We performed a retrospective study on a group of 453 patients diagnosed with uterine fibroids and having total hysterectomy with bilateral salpingo-oophorectomy.

It was observed that overweight patients had a higher incidence of 40%, followed by those with obesity-class I (21%).

Correlating the age with the body mass index and the environment of origin with the age the results obtained were not statistically significant (p = 0.364 vs. p = 0.478).

Regarding the environment of origin and the body mass index the results obtained have signaled a poorly statistically significant association (p <0.001).

On the basis of statistical analyzes it was found that the appearance of the environment of origin and body weight influences the occurrence of the uterine fibromatosis.

The age of the patients in the study group and its association with the environment of origin or BMI was not a factor in the development of uterine fibroids.

Despite increased prevalence, until now, the etiopathogenesis of uterine fibromatosis has not been elucidated completely.

Sometimes surgical treatment, such as total hysterectomy with bilateral anexectomy, is necessary, involving general anesthesia, eighter general or loco-regional, yet followed by postoperative pain of moderate to high intensity, requiring treatments with common drugs which, in turn, can generate complications in vulnerable areas, microbiome imbalance, or even unexpected infections. [2-4] All this complex of phenomena can sometimes generate an impairment in the woman’s psychological status, as well as the changes that may occur during pregnancy or later with implications at the level of the integument and appendages [5, 6]

Among the trigger factors, in scientific literature, we identify the following: the age, race and environment of the patients, hormonal imbalance, specifically the high level of estrogen and low progesterone, obesity and lifestyle (diet, coffee consumption and alcohol, smoking, physical activity and daily stress).

For this reason, in the work presented we tried to analyze if age, body mass index and environment influence the occurrence of the uterine fibroid.

We conducted a retrospective study on a batch of of 453 female patients diagnosed with uterine fibroids who underwent radical hysterectomy with bilateral anexectomy.

Regarding the analysis of the nominal variables, we calculated the values for the correlation coefficients at a nominal level φ, C and V, and also the probabilities associated with these values. If p < 0.05, we can state that there is a correlation between the variables.

The test analyzes the association between two variables.

The study fulfils the medical, ethical and deontological criteria, according to the Romanian legislation, and approved by the Faculty of Medicine and Pharmacy Ethic Comission of “Dunărea de Jos” University of Galaţi.

Statistically speaking analyzing the age, BMI and the occurrence of the uterine fibroid, the environment, the age and the development of the fibroid, the results were not significant, from a statistical point of view (p= 0.364 vs p=0.478).

Regarding the environment, the BMI and the occurrence of the fibroid, the results (non- parametrical tests and parametric Chi square test) statistically suggested a slightly significant association (p<0.001). 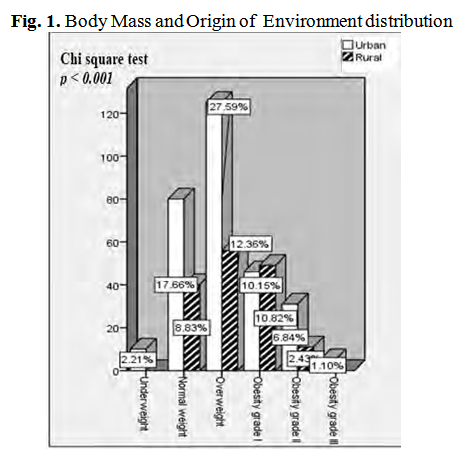 In this paper, the age of the patients did not represent a trigger factor in the occurrence of the uterine fibromatosis.

The uterine fibroid often occurs in patients at their reproductive age, la, with a high incidence for 40 year old-patients, followed by a decrease, together with menopause. [7]

The mechanism in which the ovarian hormones (estrogen and progesterone) influence the occurence of the uterine fibroid represents a dynamically approached topic in the scientific literature. Hormonal imbalances as well as the increased amount of estrogen and decreased amount of progesterone, promote the appearance and development of the disputed mechanism of uterine fibromatosis, alongside with the immunological one and the occurence of a disorder at the pelviperineal level in men-Lichen Sclerosus or Lichen Planus. [8-10]

We noticed that patients with high BMI, especially overweighted patients presented a high incidence amongst the studied batch.

There are numerous articles that attest the fact that obesity is a trigger factor in the occurrence and development of benign uterine tumors, due to elevated estrogen levels caused by the aromatization of androgens in peripheral fat tissues, that’s why vegetable-based diet and possibly avoiding medicinal therapies and their replacement with some natural extracts can constitute future topics for for scientific research. [11-13]

Increased consumption of red meat and low consumption of green vegetables and fruits lead to a greater risk of developing the uterine fibroid. [14, 15]

Comparing patients in terms of environment, the urban area had a higher incidence compared to rural area, this fact being statistically significant.

This result can be explained by dietary deficiencies, excessive consumption of fat and increased daily stress amongst the population originating from the urban area, unlike those from the rural area. [17, 18]

Studies conducted on women belonging to the same area and the existing study, have pointed out the fact that breast cancer, another pathology that is based on hormone secretion, is more common amongst the urban population. [19]

In this paper, the association between the environment and the BMI value influenced the occurrence of uterine fibroid, this being a statistically significant statement.

The age of the patients from the analyzed batch, and the association between them and the environment or the BMI, was not a significant factor regarding the development of uterine fibroid.