Vitamin D deficiency is considered a common problem among children and adolescents in other countries. In Romania, there is limited data on the frequency of this nutritional deficiency among children. Plasma dose of 25 (OH) D is the most accurate marker for assessing vitamin D status in the body. This metabolite plays a major part in calcium absorption and in maintaining bone health.

The aim of this study was to evaluate vitamin D status among children between 1 month and 5 years old in the center region of Romania.

Children’s Hospital of Sibiu between January and December 2017, in whom the plasma level of

25(OH)D was dosed by the ELFA method using the Mini Vidas BioMerieux analyser. The results were classified into 3 categories: vitamin D levels <20 ng/ml (deficiency), vitamin D levels ranging from 20 to 29 ng/ml (insufficiency), and vitamin D levels> 30 ng/ml (optimum). There were no significant differences regarding the patients’ origin environment.

Deficiency of vitamin D was recorded in many children in the centre of Romania. This deficiency was the highest in the age group of 1 month - 1 year, with low values of 25(OH)D, with a higher frequency in winter.

Vitamin D deficiency is considered to be a major public health problem in the world [1], [2]. During childhood, vitamin D is important for calcium absorption as well as for the accumulation and maintenance of calcium in the bones [3].

In addition to its contribution to bone skeleton, vitamin D can provide protection against hypertension, type 1 diabetes, multiple sclerosis and cancer [4]. Vitamin D also plays an important role in the functioning of the immune system [5], [6], [7].

Deficiency of vitamin D is detrimental to the skeleton, leading to rickets among children, while in adults it leads to osteomalacia [1], [8], [9], [10]. This deficiency occurs a few months before rickets is evident upon physical examination. Vitamin D deficiency may also include hypocalcemic convulsions, delayed growth in children, lethargy, and predisposition to respiratory infections during childhood [11].

Vitamin D in the body may be derived from food, or it may be synthesized in the dermis by exposure to ultraviolet radiation with a wavelength ranging between 280 nm and 315 nm, the peak yield occurring in the range 295-297 nm. 7-dehydrocholesterol in the skin absorbs UVB radiation when exposed to sunlight, and is then converted to pre-vitamin D3. This is isomerized in vitamin D3.

1,25-dihydroxyvitamin D plays an important part in the regulation of calcium and phosphate metabolism in order to maintain metabolic functions and skeletal health [12]. In the body, most cells and organs have a vitamin D receptor, many cells and organs have the ability to produce 1,25- dihydroxivitamine D. 1,25-dihydroxyvitamin D affects a large number of metabolic pathways, which explains the role of vitamin D in infectious diseases, autoimmune diseases [13], cardiovascular diseases, type 2 diabetes [14], [15], some types of cancer, schizophrenia, depression [16].

Vitamin D synthesis is highly influenced by season, altitude, latitude, air pollution, skin pigmentation. There are other factors that can influence the absorption of vitamin D. For example, lifestyle (reducing children’s play time outdoors) and doctors’ advice regarding the sun exposure and the use of cosmetics (using sunscreen products) reduce cutaneous production of vitamin D [8], [9].

Vitamin D deficiency has various causes: insufficient exposure to sun, lack of vitamin D in the diet, inability to process vitamin D due to liver or kidney diseases, and inability to absorb vitamin D in the gut. During this period of life, certain drugs and diseases [13] such as intestinal tract infections, celiac disease, Crohn’s disease and cystic fibrosis, affect the body’s ability to absorb the necessary amounts of vitamin D through the intestinal tract [17], [18].

Years ago, the disease was diagnosed using clinical and radiological parameters because there was no analytical method for dosing vitamin D. In recent years, many laboratory techniques have been developed that allow dosing of vitamin D levels. At present, the most reliable marker of vitamin D status is 25(OH)D, serum-dosed. A high prevalence of vitamin D deficiency has been reported globally.

Studying the effect of this vitamin on bone health, it was possible to determine the optimal level of vitamin D in the body [3] and there has been found another method of measuring the vitamin D concentration. In this case, the ultrasonic osteodensimeter (QUS) is used that measures mineral density and bone hardness based on the measurement of ultrasound attenuation and the speed of sound, data that are used in calculating the calcaneal bone index [19], [20].

In Romania, testing of vitamin D levels is not settled by the National Health Insurance House; as it is an expensive test, it is rarely recommended by doctors for testing compared to other developed countries where this test is commonly performed in the population. Consequently, vitamin D deficiency is not known in Romania.

A retrospective study was carried out by analysing the values recorded in the hospital’s electronic archive following the 25(OH)D dosing taken from 250 children aged between 1 month and 5 years, admitted to the Children’s Hospital of Sibiu, between January and December 2017.

The 25(OH)D dosing was performed from the serum, and for measuring concentration, an ELFA- type immunoassay test was used on a Vidas PC analyser, BioMerieux, France. The reagents used were from the BioMerieux Company. This immunoassay test uses a competitive assay principle using recombinant vitamin D binding protein. This principle allows the measurement of 25(OH)D2 and 25(OH)D3. For the 25(OH)D dosing, the patients in the study group were divided in three groups, namely: 1 month ÷ 1 year old, 1 ÷ 3 years old and 3 ÷ 5 years old. 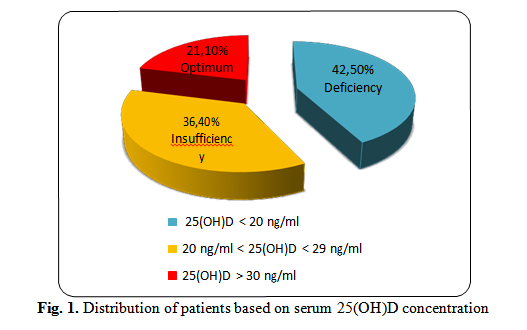 There were no significant differences between urban patients and rural patients. 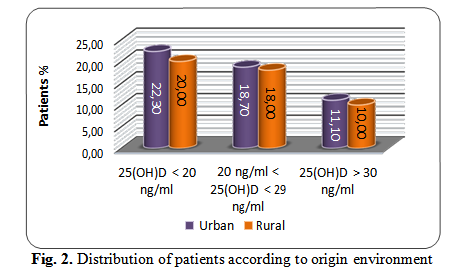 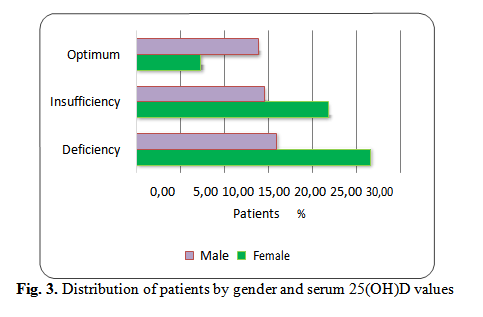 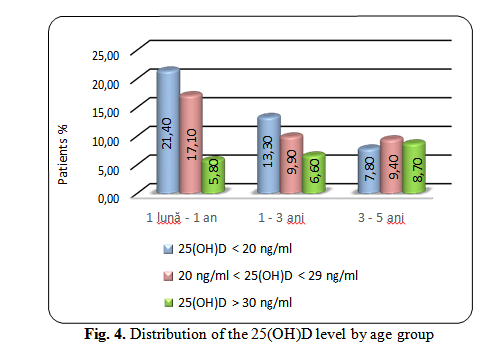 The mean difference in serum levels of 25(OH)D between winter and summer months ranged from 11 ng/ml to 18.6 ng/ml. 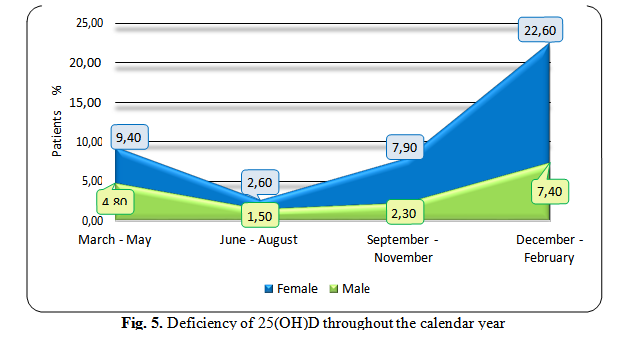 In our study, the optimum level of vitamin D was defined considering an optimal bone health. Thus, it has been established that the deficiency of 25(OH)D has a level of <20 ng/ml and insufficiency have a level of 25(OH)D between 21-30 ng/ml. In the studied group, we used these limits in all groups of age.

Our study has some limitations because it is necessary to test all healthy children to establish the real prevalence in the center of Romania. Further research for dosing the 25(OH)D level should be continued in all age groups, considering the conditions in which they live, nutrition, sunlight exposure time.

This study is important for the infant population and clinicians taking therapeutic decisions (vitamin D supplementation) to prevent rickets.