The aim of our study was to describe the principles of otitis media OM) management in children. Our system consists of selective middle ear (ME) monitoring in children and complex of flexible adequate treatment. Children aged 1 to 7 years of life were monitored by screening tympanometry and screening otoscopy during 2 years. Complete audiometry, bacteriologic examination and CT of middle ear and paranasal sinuses were performed for children with OM.

Oto-microsurgical intervention by modified method was done in children with persistent OM with effusion (POME) and recurrent OM (ROM). Effectiveness of ME monitoring is justified for children with chronic or recurrent somatic pathology. Information from complex audiological examination is sufficient for diagnostics of conductive hearing loss but not sufficient for differentiation of OM forms and indication for surgery. Otomicroscopical, radiological and microbiological examination is necessary for indication of adequate treatment.

Surgery in our modification facilitates removal of effusion from ME and improves visualization of tympanic cavity in late OM forms. The complex treatment significantly and stably increases hearing of children with POME and ROM for 1 year, improves indexes of their general health and ameliorates their quality of life.

Otitis Media (OM) is the most frequently diagnosed childhood disease, which is managed by different modalities of treatment from watchful waiting to early surgery [1, 2, 3, 4, 5, 6].

Global middle ear (ME) monitoring for early OM diagnostics has positive and negative impacts. Early detection of children with ME pathology helps to prevent chronic conductive hearing loss, chronic suppurative OM and intracranial complications. But global OM screening may lead to hyperdiagnostics and unnecessary treatment, including antibiotics and surgery. The most important aim of OM monitoring is the identification of children with high risk of recurrent and chronic OM, which need intensive treatment. [1, 2, 4, 5].

The range of risk factors for OM development is variable and unspecific. The same group of risk factors is on the base of more evident pathological conditions of health than OM, such as recurrent and chronic respiratory tract pathology and recurrent/chronic gastrointestinal pathology.

Management of persistent and recurrent OM includes variety approaches. Traditionally adenoidectomy with or without conservative and physical methods as a standard treatment modality is used widely in the world. Myringotomy with tympanostomy tube insertion usually is recomended as a second procedure on a later stage. The effectiveness of this classical intervention is not satisfactory. [3, 4, 6]. Nowadays more contemporary surgical aproach for POME and ROM treatment such as myringotomy with tympanostomy tube insertion as a first procedure  is  the  most  frequently  surgery  performed.  Effectiveness  of  this  miniinvasive intervention is not high in persistent and recurrent forms. [3, 4, 6].

In Moldova the system of management of OM in childhood is in an ongoing development. Together  with  pediatricians  from  Society  “Medicines  due  Monde”,  Clermont-Ferrand, France, we conduct a Project of ME monitoring in different groups of children with recurrent and chronic somatic pathology in order to determine groups of children who really need surgical intervention. [7]. Surgical treatment-myringotomy with insertion of tympanostomy tube by modified version (BOPI MD, 2013), was elaborated on the basis of researches which we conducted during Joint bilateral Project at Mayo Clinic, Rochester, MN, USA [7]. Our surgery modification is indicated for late OM forms, such as persistent or chronic otitis media with effusion (POME) and recurrent otitis media (ROM). It facilitates removal of the pathological effusion from the tympanic cavity and mastoid cells and improves visualization of tympanic cavity and morphology changes of tympanic cavity in children with late OM forms. [7].

Specific goals of OM treatment are restoration of normal physical and acoustical abilities of middle ear and prevention of OM sequel. [1, 2, 3, 4, 5, 6]. The main indicators of patient’s satisfaction remain the patient’s quality of life and general health improvement. [7, 8, 9, 10].

Evaluation of the physical, acoustical characteristics, hearing, quality of life and general health characteristics is necessary in order to determine the feasibility of therapeutic activities conducted in this pathology.

The purpose of this article is to describe our principles of OM management and evaluate it effectiveness by comparing of hearing, quality of life and general health characteristics in children with POME and ROM after different modalities of treatment.

Methods: Every child was monitored by screening methods such as screening tympanometry and screening otoscopy 4 times during 1 year (once in 3 months). Complete work up: Presence of pathologic changes for at least 3 months or repeatedly during 6 months was indication for including in study group.

Database. As a result of Project, I the children with POME and ROM were identified and three hundred of them were included in the Project II. We randomly assigned them to three subgroups according to different modalities of treatment: Tympanostomy and Adenoidectomy (T), Myringotomy and Adenoidectomy (M), Adenoidectomy alone (A). An additional control group (C) consisting of 100 ear-healthy children with no known ear pathology at the moment of including in the Project.

Methods: We used several instruments in our study: Background characteristics questionnaire; Otomicroscopical examination; Audiological assessment; X-ray examination of paranasal sinuses; bacteriologic examination of palatine tonsils; CT of ME; Results of surgery; Monitoring in dynamics; Quality of life (QOL) and General Health (GH) questionnaires before and after treatment. All the patients followed a standard treatment according to clinical findings.

Persistent or recurrent signs of OM after the treatment were considered as presence of independent OM and the patient was included in study group. Statistical analysis (Stjudent- criterium, Fisher-statistics and discriminate analysis) was made.

Patients: Totally 2138 children at age 1 to 7 years of life with somatic pathology and healthy children were recruited to a prospective ME monitoring. The mean age of children was 4.1 years (SD 1.5).

Monitoring of ME pathology: Majority of children had ME pathology during these 2 years of observation (Fig. 1.). 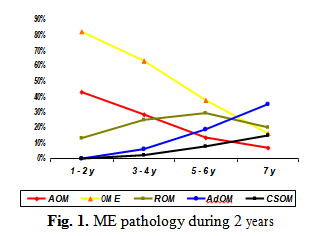 The cumulative data of ME pathology, clinically typed as acute OM (AOM), OME, POME, ROM, adhesive OM (AdOM) and chronic suppurative OM (CSOM) demonstrated that pathological ME processes were characteristic for children till 7 years with the prevalence of short duration forms, such as AOM and OME during first 3-4 years of life. Formation of sub-chronic forms such as POME, ROM began from 2nd year of life with the maximum at the age 4-5 years of life. Chronic forms AdOM and CSOM became evident from 3-4 years of life, but their background was built earlier.

Influence of chronic somatic pathology. Majority of children with OM were from the group with recurrent and chronic respiratory tract pathology (group R). Children with gastrointestinal (group G) pathology develop OM in 28% of cases. (Fig. 2). Persistent and recurrent forms (POME and ROM) were diagnosed in 36% and 18% of children from R group. In group G chronic ME pathology was diagnosed rare, but recurrence-chronicity rate in both groups was more than 60%. Analysis of OM types demonstrated (Fig. 3) the tendency to recurrence and chronicity in R and G groups.

Agreement between methods. Impedance Audiometry: Pathological tympanogram during more than 6 months with the confirmation of ME pathology by others noninvasive methods and absence of its normalization after medical treatment was the indication for surgery. All cases of OM and duration at least 6 months were included in surgical group.

In children with type C of tympanogram (if type B presented on opposite ear) we found signs of AdOM and CSOM (Tab.1). Cholesteatoma was determined even more often than in Type B subgroup.

Radiologic examinations: Presence of sinusitis was an indication for intensive treatment. Spiral CT with 3D reconstruction of ME demonstrated presence of effusion in tympanic cavity and mastoid process, soft tissue similar to granulations.

Bacteriologic findings of Staphylococcus aureus or Streptococcus b-hemolytic gr A in palatine tonsils correlated to POME or ROM.

Characteristics of patients. Our study population was made up of 300 patients – 158 boys and 142 girls – with bilateral POME or RAOM and a conductive hearing loss of greater than

30 dB. They were randomly and evenly assigned to one of three subgroups, equal in age, duration of middle ear effusion, concomitant pathology, etc.

Acoustical characteristics. Improvement of hearing in T subgroup after the surgery was stable during 12 months in 92% of cases. (Fig. 4) During every trimester of the year we noted a temporary (1-2 weeks) worsening till 25 dB in 1%, 2%,1% and 4% of cases. Dynamics of hearing in M and A groups undulated: after an improvement of hearing we registered it gradual reduction in the majority of cases. Normal hearing during 1 year of follow up registered only in 32% of children from M group and 24% from A group. These results statistically significantly differ from the data of T subgroup and С subgroup (p<0.01). 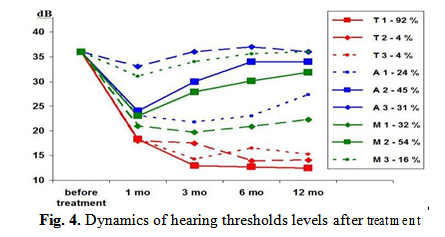 In OM groups the GH score is 6.625 (SD 0.3), in control group – 1.3 (SD 0.2). P<0.01. (Fig. 5) During the follow up after surgery in T subgroup we have registered a statistically significant reduction in the number of days off, clinic visit number, antibiotic courses and presence of OM. 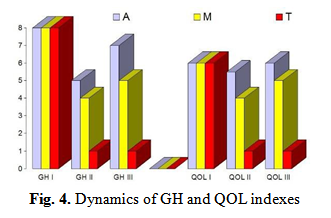 Majority of patients with POME or ROM and somatic pathology needed surgical treatment.

1.  Middle ear monitoring is justified for children with chronic or recurrent somatic pathology.

2.  Information from complex audiological examination is sufficient for diagnostics of conductive hearing loss but not sufficient for differentiation between OM forms and indication of surgery.

3.   Complex audiological, otomicroscopical, radiological and microbiological examination is necessary for children with POME and ROM for indication of medical and surgical treatment.

4.   Modified tympanostomy with adenoidectomy significantly and stabile increases hearing of children with COME and RAOM, improves indexes of their GH and QOL.