World War I stemmed from the fight to reshape the spheres of influence among the great powers grouped around the two forces: Central Powers (Germany and Austria-Hungary) and Entente Powers (British Empire, France and Russia). The War broke out on 28 July 1914 following Austria- Hungary’s attack on Serbia, and involved 33 countries with a population of over 1 billion inhabitants.

This paper relies mostly on the documents available in the personal archive (PA) of Colonel Pharmacist Constantin Iugulescu (1924-2006). This personal archive includes 156 files and resulted from systematic research across important Romanian state institutions: Archives of the Ministry of National Defense, the Academy Library, National Archives. Special focus is put on the military medical service (56 files), the field in which C. Iugulescu obtained his Doctor of Pharmacy title in 1975.

Important information on the Romanian medical service during World War I was also preserved due to official reports:

-    Dare  de  seama  asupra  desfasurarii  activitatii Serviciului  farmaceutic  in  primul  razboi mondial (Report on the activity of the Pharmacy Service during World War I) prepared by Colonel Constantin Merisanu, Chief Pharmacist of the Army and Head of the Central Medical Supplies Warehouse. This document archived with the Bucharest Military Hospital reports the author’s experience in his previous positions (the highest ranking in the military pharmacy service) and his achievements throughout the War [2];

During the war, 38 of them died [2]. France’s constant support for our country in modern history also manifested during the two years (1916-1918) that the Romanian Army forces fought the World War I.

The French military mission led by General Henri Mathias Berthelot (1861-1931) significantly contributed to the reorganisation of the Romanian Army, also helping with medical personnel (88 doctors and pharmacists) and ambulances.

In addition to these statistics, here are the names of a few pharmacists who acted with professionalism, courage and loyalty. 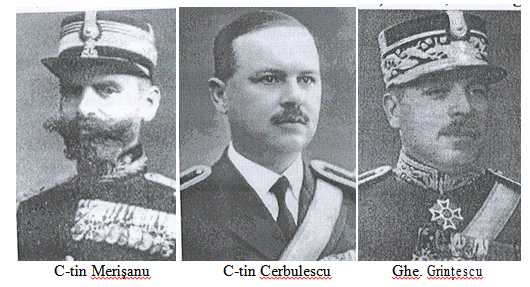 He joined the Army in 1886 and promoted to Batallion Pharmacist in 1888 when he was assigned to Constanţa. The same year, on 16 October 1888 he was appointed chemistry teacher with the Sub- Officers School in Bistrita, Valcea County. He was then promoted to Pharmacist Lieutenant (1892) and Captain (1897), and appointed Head of Department with the Army’s Chemistry Lab in Bucharest.

In 1909 he was appointed Chief Pharmacist in the Romanian Army with the degree of lieutenant- colonel. In this capacity he was in charge of equipping the Army (medicines, sanitary supplies) and the good organisation of regional and central warehouses. In 1912 he was promoted to Colonel as the first military pharmacist with such a degree. When the Central Medical Warehouse Directorate was established (1915), the authorities appointed Colonel Constantin Merişanu as Chief. He also promoted young military students whom he helped study abroad. Al. Ionescu-Matiu and Ghe. Pamfil were among those young people who went on to have brilliant careers.

Constantin Cerbulescu (24 December 1882 – 6 November 1972) was born in Mehedinţi County, Burila Mică Commune. He was among the ilustruous military pharmacists who took part in the historical events involving Romania during the first half of the 20th century: the Bulgarian campaign during the 1913 Balkanic conflict, World War I and World War II. He joined the Army in 1905 and promoted to colonel in 1911. He served during the World War I as pharmacist captain in the medical service of the Great General Headquarters that took refuge in Iasi. This information is available in two documents kept in pharmacist colonel Constantin Iugulescu’s personal archive:

As a pharmacist, he was passionate about chemical analysis and specialised in the field. He got his Doctor of Pharmacy degree (1917) and the title as expert chemist (1924), two qualifications that allowed him to manage the Army’s test laboratories. He was awarded the Sanitary Merit Medal Class II in 1916 and received the Commemorative Cross of the 1916-1918 War in 1919.

Gheorghe Grinţescu (26 April 1878 – 8 September 1956) was born in Petricani, Neamţ County. In 1900 he was the highest-ranking candidate to get into the Medical-Military Institute as in-house pharmacist. In 1903 he was promoted to sublieutenant and assigned to Army Corps 2 and relocated to the Central Military Hospital in 1905.

On 1 April 1916 he was sent to the Sanitary Warehouse of Army Corps 2 and promoted to major in November.

He became lieutenant-colonel in 1917 and put in charge of the evacuation of the Iasi warehouses to Odessa. He was here when the bolsheviks took the power.

He also had a remarkable scientific activity with more than 60 papers published in the fields of botanics and pharmacognosy.

He was awarded Sanitary Merit Class II with war medal, the Commemorative Cross of the 1916-1918 War, the Golden Honorary Distinction for a 25-year servicein the Army.