Surgical smoke is a visible and malodorous byproduct released into the air as a result of the disruption and vaporization of tissue and cellular matter by the energy-generating devices commonly used in surgery like electrosurgical units, lasers or high-speed electrical devices.

Whereas years ago, surgical smoke may have been considered as a normal part of the surgeries, nowadays a large number of scientific publications have demonstrated that hazardous substances and their inhalation can lead to adverse health effects. Despite the increase in available information, however, perioperative information continues to demonstrate the lack of awareness of these dangers and the failure to comply with smoke evacuation recommendations during surgical procedures.

A lot of harmful chemical elements that are contained in surgical smoke are non-viable particles, cellular debris, viable viruses and bacteria and viable cells and of course in smaller quantities other chemicals like hydrogen cyanide, formaldehyde and benzene. The purpose of our article is to establish the state of the current knowledge of existing dangers and, in particular, to indicate the preventive measures that can be put in place to protect the health of exposed personnel.

Surgeons and the surgical personnel should be aware of the potential risks surgical smoke poses and utilise reasonable measures to minimise exposure and prevent adverse effects. As a result of multiple research, we evaluated some protective methods that should be enforced: high filtration masks can help prevent exposure to airborne infectious agents, local stationary evacuation systems with a suction source, central stationary evacuation systems or a ClearFlow evacuation system and the perioperative team must be regularly trained is to maintain the quality of the organisational steps taken to reduce exposure to pyrolysis products.

Surgical smoke is a visible and malodorous byproduct released into the air as a result of the disruption and vaporization of tissue and cellular matter by the energy-generating devices commonly used in surgery like electrosurgical units, lasers or high-speed electrical devices. [1] These techniques produce smoke, the composition of which has been the subject of numerous articles. This smoke consists of a mixture of chemical pollutants in the gas or vapour phase and in the form of particulate components. Its composition varies according to the technique used, the mode of use and the type of intervention. [2, 3]

•     During electrosurgery, due to the increase in cell temperature at boiling point, cutting occurs. Therefore, the cell walls explode and the vaporized liquid is dispersed in the air.

•     For coagulation effect, the increased temperature of the tissue slowly and a long-term application of the leading current to carbonization are recorded. Carbonised tissues will thereby also contribute to the debris released into the air.

•     Laser surgery is a heat-releasing technology which results in the same type of surgical smoke as that obtained with electrosurgery, with similar types of particles. [4]

•     Ultrasonic scalpels apply vibrations at a very high frequency for cutting and coagulating.

The tissue is vaporised at lower temperatures than during electrosurgery, and aerosols are created.

In addition to the unpleasant smell of surgical smoke, smell is evidence of harmful smoke content, being a mixture of chemical byproducts from protein and lipid burning when using electrosurgical instruments. Several studies highlight the harmful consequences for the inhalation of such chemicals like headaches, irritation of eyes, nose and throat, as well as potential long-term effects. Gasses such as carbon monoxide and methane have been detected, with a mutagenic and carcinogenic potential similar to that of cigarette smoke. [5]

Other chemicals present in smaller quantities, include hydrogen cyanide, formaldehyde and benzene. [7]

In the smoke created during the electrosurgical excision procedure, viable cells such as DNA from the human papillomavirus (HPV) has been found. More investigations are though needed to investigate the viability of the DNA. [8] The evaporation process of the ultrasound scalpels takes place at lower temperature and creates particles made of biological tissues, blood and blood by-product (Fig. 1). In addition, there is a higher chance that the cool aerosol will carry infectious and viable material compared to high-temperature smoke from electrosurgery and laser surgery. [9]. 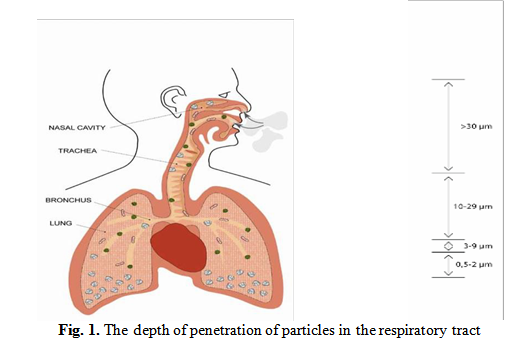 In this context, where the surgeon’s risk grows exponentially, it is very important to spread the useful protection methods in order to be implemented at a legal level. Theoretically, the masks were designed to protect patients from the droplets by healthcare professionals working in the operating room. Today the focus of protection has changed to how surgical masks can be used as a safeguard for the surgical team.

However, only large droplets or particles of over 5 μm in size are blocked, for this reason, surgical masks provide little or no protection from the gas phase of the smoke or the aerosol. [10] High-performance filtration masks, if worn correctly, provide greater protection, but are very difficult to breathe through. These high filtration masks are effective down to 0.1μm and can help prevent exposure to airborne infectious agents. [11]

Another common practice to remove surgical smoke is to use suction tubing attached to a suction machine. Unfortunately, the power of these devices is not enough to evacuate surgical smoke properly. [12] The smoke evacuation wand or tubing must be positioned close to the tissue site where the plume is being generated. Studies have shown that, further, a smoke tube is from the smoke generation site, the amount of smoke emitted will drop significantly, thus allowing residual particles to escape into the air. As a rule, the air in the operation room should be exchanged, as a minimum, 15 times per hour. Even this standard is, however, far from adequate to remove the noxious surgical smoke before it affects people present in the room.

Another innovation nowadays is the SafeAir Smoke Pencil that is single-use electrosurgery pencil with fully integrated smoke aspiration and liquid suction functions. A slim design and no additional cable that can disturb the surgical act make this product the perfect way for safe electrosurgery. The disadvantage is the cost.

The most effective way to protect personnel and patients from the hazards of surgical smoke is to use a portable smoke evacuation system. Such a system should create aspiration in the direct vicinity of the source. An individual smoke evacuator is available today that is very small, portable, quiet, and cost-effective. Smoke evacuators today have a sophisticated filtration system that includes: charcoal filter, ULPA filter. [13] The purpose of the charcoal filter is to remove the toxic gases and odor generated by the surgical smoke. Charcoal from coconut shell is effective in absorbing and deactivating the odor associated with the laser plume. The ULPA (ultra low penetration air) filter which provides filtration of 0.1 microns sized matter at 99.9999% efficiency. This filtration is achieved through a depth filter that is similar to a labyrinth. Depending on the particle size, there are three filtering methods:

1.   Direct interception- captures particles that are over 1 micron in size because they are too large to pass between the fibers of the filter media.

2.   Inertial impaction: the filters are 0.5 to 1.0 microns in size, as the particles hit the fibers and then stay there.

3.   Diffusional interception: Particles less than 0.5 microns are captured because of the effects of Brownian motion as the particles “search out” fibers and adhere to them. [14,15]

Centralized smoke evacuation systems have been designed for the plume to be suctioned through the tubing to a central area where filtration takes place. System pillars are availability levels, but the disadvantage is that internal tubes should be washed regularly to prevent build- up of debris and pathogen growth. Another is in case of central system malfunctions or breaks down, the smoke evacuation is no longer available in multiple surgical areas. Monitoring of the filter and changing the filter when indicated is vital to proper smoke evacuator maintenance.

The final solution to control surgical smoke is to provide continuing education for the entire surgical team on the hazards and methods to minimize and eliminate plume. The whole surgical team has to propel education into what is surgical smoke so that everyone understands the dangers of surgical smoking. Empowering personnel to implement best practice begins with a solid foundation of education and competency verification.

Personnel should participate in education and competency verification activities before a new smoke evacuator and accessories are introduced into practice.