Targeting the overexpressed receptors of cancerous cells may be used with great success both for early detection and treatment of many cancers. Peptide-based targeting molecules take few advantages over the antibodies and proteins: rapid blood clearance and non-target tissues, non immunogene and high tumor penetration. The high expression level of many peptide receptors on the cancer cells compared with the normal tissues is a powerfull tool for both diagnostic and targeted radiotherapy [1-3].

68Ga is a short-lived radioisotope emitting positrons with a physical half-life of 68 min, suitable for chemical synthesis, separation and purification of the radiolabelled compounds; furthermore, the self life matches many peptides and other small molecules pharmacokinetics, characterized by rapid diffusion, localization at the target and fast blood clearance [1]. Since only 11% of this radioisotope

decay proceeds through electron capture and the remaining 89% through positronic emission with energy of 1.89 MeV [4], 68Ga is very attractive for PET (positron emission tomography) imaging applications in nuclear medicine [5, 6].

The 68Ga radiolabelling processes of different peptides were successfully adapted on the automated module, reducing reaction time and operator exposure. Nanomoles of very promising candidates for imaging targets of interest in cancer diagnosis and therapy follow-up such as neurotensin receptors, somatostatin receptors and αvβ3 integrin receptors, were labelled and purified, resulting in high radiochemical purity compounds (RCP > 98%). The radiolabelling yields of 68Ga-NODAGA-NOC, 68Ga-NODAGA-RGDfK,  68Ga-DOTA-E-[c(RGDfK)2]  were  higher  than  90%.  The  biological evaluation of 68Ga-DOTA/NODAGA-[c(RGDfK)2] in tumor bearing models show a high and stable tumor uptake, good tumor to background ratio and fast renal elimination of the NODAGA derivative.

3.1 Radiolabelling and quality control of the selected peptides

Positron emission tomography (PET) is a non-invasive medical imaging technology that can be used to image the distribution of positron-emitter-labelled agents with high resolution and sensitivity.

Positron-emitters for PET, 11C, 13N, 15O and 18F have been widely used, but because of very short half-life, the use of PET requires large-scale and expensive equipment such as an on-site cyclotron for the production, radiochemistry systems for the synthesis of PET tracers, and incidental equipment, limiting the availability of PET imaging. Radioisotope generators provide short-lived positron emitters for positron emission tomography (PET) without the need for an on-site cyclotron. Among them, the metallic radionuclide, 68Ga is of great interest because of its radio-physical properties (t1/2 68 min; β+ 89% and EC 11%; Eβ+max 1899 keV). The long half-life of the parent 68Ge (t1/2 270.8 days) permits shipping of 68Ge/68Ga generators to a clinical site, where the daughter 68Ga can be eluted on demand.

The development of 68Ga-labeled radiopharmaceuticals is based on recent knowledge of radiogallium-labelling chemistry. The only stable chemical form in aqueous solution is the cation Ga(III), which can precipitate and hydrolysis at pH 3-7 in tri-hydroxide insoluble form, if the concentration exceeds nanomolar level. In the presence of the stabilization agents, the precipitation can be avoided. At the physiologic pH 7.4 the total solubility of gallium is higher due to the formation of the ions [Ga(OH)4]-.

The Ga(III) cation forms stable complexes with a large variety of ligands with contain of oxygen and nitrogen or sulphur, as donors atoms.

Thus, Ga(III) is suitable for the conjugation with chelates, bounded to peptides or other macromolecules. Because of very short half- life of 68Ga, manual synthesis of radiotracers and releasing procedure lasts too long for the clinical applications, but the automation of the synthesis methods can significantly reduce this time.

The introduction of small peptides as carrier molecules for radionuclides has opened up new possibilities for development of diagnostic agents. [18F] FDG is limited in detecting tumours with small foci and some type of tumor cells are undetectable with [18F] FDG because they use non- glucose-based substrates as an energy source, therefore their clinical application has been limited.

There have been a number of reports on peptide-based agents that have demonstrated the ability to image the receptor in vivo, as potential agents for the detection of malignant tumours via PET imaging.

Selection of peptides for radiolabelling with Ga-68 was made based on their increased affinity and specificity for tumour membrane receptors. The somatostatin analogue, octreotate (TATE), preserves the 4-amino-acid motif (Phe-D-Trp-Lys-Thr) of native SST-14 involved in receptor binding.

Somatostatin receptors have been identified on the surface of many neuroendocrine tumours and represent a valid target for in vivo tumour imaging and also for small metastatic sites. Neurotensin (NT) is a tridecapeptide found in the brain and gut and has many growth regulatory functions.

Overexpression of NT receptors (NTR1) has been found in several human cancers including Ewing sarcomas, meningiomas, astrocytomas, medulloblastomas and pancreatic carcinomas. An NT-analogue developed for targeting NT receptor-expressing tumours, and a shorter chain NT(8-13) were selected for the study. The αvβ3 integrin receptor, expressed on tumour cell membranes can be preferentially targeted by peptides containing the RGD (arginine-glycine-asparagine) sequences.

This receptor is highly expressed on activated endothelial cells and tumour cells such as melanoma, glioblastoma and osteosarcoma, regulates the production of vascular endothelial growth factor (VEGF) in these cells and plays an important role in tumour-induced angiogenesis and metastases, showing weak expression in the endothelial cells and most normal tissues. Together, integrins and RGD proteins comprise a versatile cell recognition system controlling crucial events such as cell adhesion, migration, growth, differentiation and apoptosis.

Due to the selective expression of the αvβ3 integrin in tumours, minor modifications of these peptides could have a major impact on in vivo characteristics. Cyclization improves binding affinity and selectivity for integrin over glycoprotein.

DOTA (2,2',2'',2'''-(1,4,7,10-tetraazacyclododecane-1,4,7,10-tetrayl) tetraacetic acid and NODAGA N-[4,7-bis(carboxymethyl)octahydro-1,4,7-triazonin-1-yl] triacetic acid chelators have been employed for radiolabelling with Ga-68 of selected peptides; it has been reported that NOTA and NODAGA derivatives have much higher 68Ga-labeling efficiency than the DOTA analogs [7].

For the fully automated radio-synthesis of the peptides, the 68Ge/68Ga generator was eluted with 4 ml HCl 0.05 M using a remote-controlled pump. 20-29 nmol of peptide-chelator conjugates were radiolabeled using the fractionated eluates, with no further purification. The reaction mixtures, pH 4-5.5 were heated for 5-10 min at 95 oC or left at room temperature and then purified on a C18 column.

The final products were recovered from the purification cartrige in ethanol, evaporated and re- dissolved in 0.9% saline solution. The optimised parameters of the radiolabelling reactions are presented in the Table 1.

In vitro binding characteristics of the radiolabelled peptides were performed on tumour cell lines using Ligand Tracer method, based on real-time quantification of protein-cell receptors interactions.

Approximately 4x105 cells were seeded in a defined part of the Petri dish and then incubated for 24h to allow the cells to attach firmly to the dish, at 37 °C in a humidified atmosphere containing 5% CO2. The cells were incubated in Dulbecco’s Modified Eagle Medium (DMEM). Before placing the cell dish in the Ligand Tracer instrument, the medium was replaced in order to remove the weakly attached cells.

After reaching maximum binding, the medium containing radiolabelled compound was removed and washed with 2 mL medium and another 2 mL of fresh medium was added to the cell dish, measurements were started for the retention study. Studies were performed using 0.25 nmol of radiolabelled peptide.

The biodistribution studies were performed on tumour bearing rats and mice (B21 melanoma and AR42J pancreatic tumor), rats (average weight 100 g/tumors 2-6 cm diameter) and mice (average weight 40 g/tumors 0.2-0.5 cm diameter). Approximately 10x106 (400 μL) cancer cells were inoculated subcutaneously in the right flank of NU/J mice. Tumours were nodular and well delineated, with mean volume of 2500 mm3 at 9 days post inoculation. Animals were injected with 4-5 MBq of radiolabelled peptides via the tail vein and sacrificed at 60 min post injection. The organs and probes from blood and urine were weighted and counted. The activity found in the organs is expressed as % of injected dose per g organ.

3.1 Radiolabelling and quality control of the selected peptides

Elution, radiolabelling of the peptide-chelator conjugates with 68GaCl3 and purification procedure was performed in 30-40 min, with a reproducible radiochemical yield over 61%. The radiochemical purity of the final product performed by HPLC measurements was higher than 98% for 7 from the 9 tested compounds, as it is illustrated in the Table 2. 68Ga-DOTA-NT(8-13) show lower radiochemical purity. Stability tests show that the compounds remain stable in 0.9 % saline solution at 4h after end of synthesis. Selected radio-chromatograms are presented in Fig. 1. 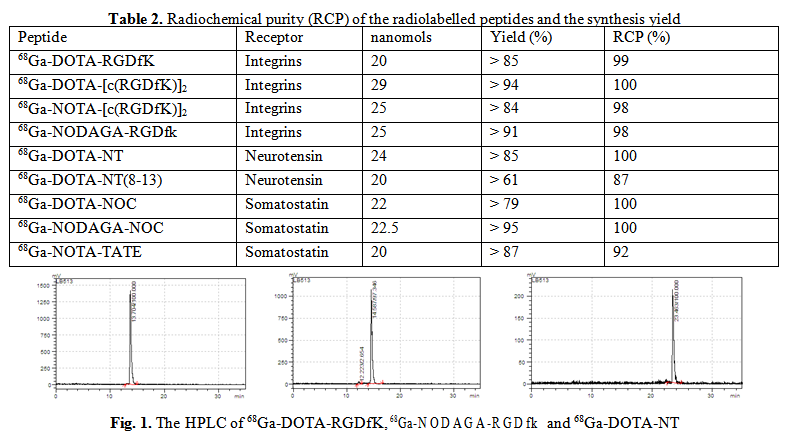 Biological behavior of 68Ga-DOTA/NOTA/NODAGA-(RGDfK) was tested in vivo on AR42J and U87MG tumor cell lines, expressing integrin receptors and ex vivo in tumor bearing animal models, xenografted with B21 melanoma and AR42J pancreatic cancer. Real-time quantification of biomolecular interactions determined a fast uptake of the 68Ga-labelled RGD peptides to AR42J cells; the maximum uptake was similar for NODAGA/NOTA and DOTA conjugates respectively but the retention was higher and more stable for 68Ga-NODAGA-cRGD as it is shown in Fig. 2 (left). When RGD peptides affinity was evaluated on U87MG cell line, the uptake mechanism was also fast. In Fig. 2 (right) is presented the higher retention of 68Ga-NODAGA-cRGD monomer (green) compared with 68Ga-DOTA-cRGD monomer (blue) and, respectively, the higher retention of 68Ga-DOTA- [c(RGD)2] dimer (red) compared with 68Ga-NOTA-[c(RGD)2] dimer (black), reflecting the importance of the chelating agents strengh and stability. 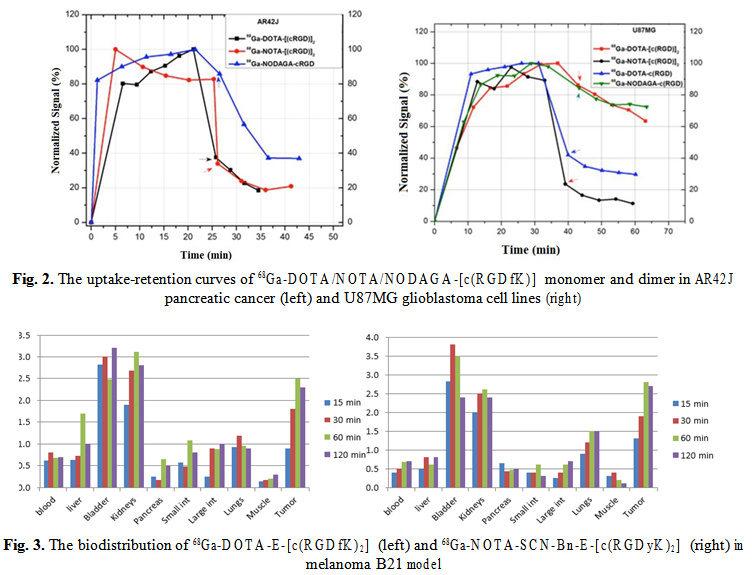 68Ga-DOTA-E-[c(RGDfK)2] and 68Ga-NOTA-SCN-Bn-E-[c(RGDyK)2] show rapid uptake in the pancreatic tumor cells and the binding was stable over 30 min (Fig. 4). The biodistribution in AR42J tumor model show high uptake of 68Ga-NOTA-SCN-Bn-E-[c(RGDyK)2], up to 10.5% ID/g at 60 min p.i., and a fast blood clearance. The elimination through kidneys is giving the high activity in kidneys and urine.

The 68Ge/68Ga generator is giving 68Ga-chloride in low volume solution for labeling of namols of peptides, with good yields and high radiochemical purity (RCP>99%), as requested for molecular imaging purposes. Successful optimization of labelling and automation was made, which shortened synthesis and purification time at 15-20 minutes, suitable for the short-lived positron emitter.

The very promising candidates for imaging targets of interest in cancer diagnosis and therapy follow-up such as NT receptors, somatostatin receptors and αvβ3 receptors, were preliminary assesed for their biological behaviour, using in vitro and ex vivo methodologies. Real-time quantification of biomolecular interactions determined a fast uptake of the 68Ga-labelled RGD peptides to pancreatic tumor cells (AR42J) and higher retention of 68Ga-NODAGA-cRGD, reflecting the importance of the chelating agents strengh and stability. Biodistribution of 68Ga-DOTA-E-[c(RGDfK)2] and 68Ga- NOTA-SCN-Bn-E-[c(RGDyK)2] in pancreatic adenocarcinoma model show a high and stable tumor uptake of both compounds, but faster renal excretion and favourable tumor to background ratio of the NOTA derivative.

The radiochemical purity of the radiolabelled peptides, the robust and reproducible synthesis process, and promising biological assesment data recommends these peptides for further investigations, as promising candidates for imaging targets in pancreatic tumours.