Caesarean section (C-section) is a necessity, due to maternal and fetal pathology. In many developed countries, approximately one third of pregnant women give birth through caesarean section. The retinopathy of prematurity (ROP) is a multifactorial disease with invalidating potential. Multiple pregnancy, in vitro fertilisation, chorioamnionitis, low gestational age and birth weight, postnatal infections are risk factors that influence the development of the retinal vascularisation. The purpose of this study is to analyse whether the caesarean section may be considered a risk component for ROP. We analysed data from the charts of premature born in Polizu Maternity during 01.01.2016-31.12.2017 who underwent laser therapy for retinopathy of prematurity. All new-borns from the study had ROP stage 3+. About half of premature in the study were born through caesarean section. The maternal pathology is one of the most important factors which influence the type of birth.

Despite advances in perinatal and neonatal care, prematurity is still the major cause of mortality and long-term morbidity in infancy. Prematurity itself is the most important risk factor for retinopathy of prematurity (ROP), which is a vasoproliferative pathology occurring in premature with gestational age under 34 weeks. Retinal development is affected. Vascular growth at retinal level begins at 16 gestational weeks. Under the influence of risk factors that may lead to premature delivery (maternal age, in vitro fertilization, multiple pregnancy, preeclampsia, eclampsia, chorioamnionitis) and postnatal ones (low age and birth weight, supplemental administration of oxygen, sepsis, multiple transfusions for treating anemia, late onset of enteral nutrition etc.), the evolution of retinal vascularization is disturbed, leading to neovascularization. These new blood vessels can grow beyond normal levels, and without adequate ophthalmologic treatment, it can lead to retinal detachment and blindness. (1, 2, 3, 4, 5, 6, 7) ROP is classified by location (zone I, II and III) and severity (presence of plus factor) in 5 stages, from the mild form (stage 1) to the most severe one (stage 5) (1, 2, 3, 4, 5, 6, 7).

Screening of ROP must include premature under 34 gestational weeks and/or birth weight under 2000 grams, and those over 34 weeks with risk factors after birth (administration of oxygen with concentration over 40%, sepsis, necrotizing enterocolitis, anemia of prematurity, multiple transfusions, shock) (1, 2, 3, 4, 5, 6, 7, 21).

The indication of ophthalmologic treatment depends on the stage of ROP. The gold standard is laser intervention. (1, 2, 3, 4, 5, 6, 7)

In the effort of reducing neonatal morbidity, maternal outcomes must be considered, when performing caesarean section. Studies found no benefit in very low birth weight infants but detected higher maternal morbidity. Controversies to establishing the ideal mode of delivery for preterm infants still exist, mainly because of population heterogenicity and clinical experience. (13, 14, 15, 16, 17, 18, 19, 20, 21).

The study group includes 214 premature admitted in the Neonatology Clinic of N.I.M.C.H. Alessandrescu-Rusescu for laser therapy during 01.01.2016-31.12.2017. From this group, due to insufficient information, we chose to analyses only the premature born in Polizu Maternity.

In 2016 there were 12 interventions performed on premature delivered in our facility and in 2017-15. We analyzed gestational age, birth weight, sex, Apgar score, maternal pathology, mode of delivery, place of birth, resuscitation at birth, need of mechanical ventilation and existence of anemia of prematurity.

In the Neonatology Clinic of N.I.M.C.H. Alessandrescu-Rusescu, 53% of premature admitted for laser therapy ROP in 2016 came from level III maternities in Bucharest, in 2017, 56%. (Fig. 1) 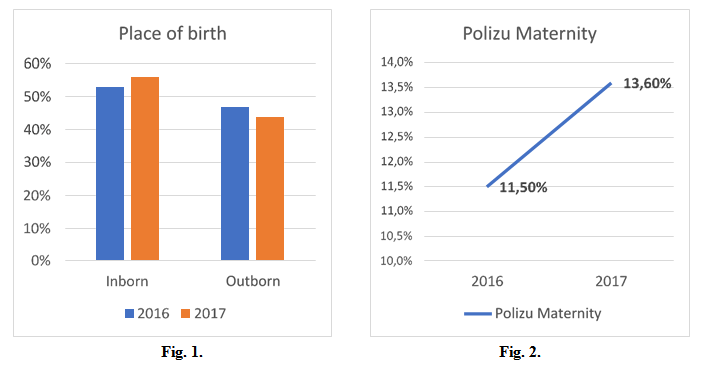 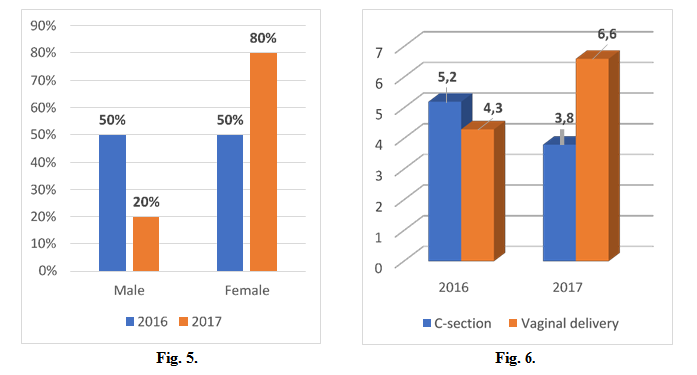 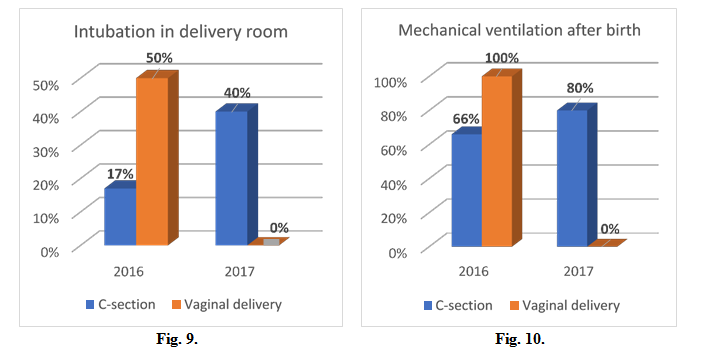 The necessity of a caesarean section is established by maternal pathology, which has impact on fetal viability. Despite all this information, according to WHO, rates of cesarean section are rising. Although our studied group is not statistically significant, our data is similar to other studies that show caesarian section does not influence mortality in premature.