Women with gestational diabetes mellitus develop a higher risk of major congenital malformations such as neurological, cardiac or gastrointestinal. Congenital diaphragmatic hernia is one of the anomalies which affects new-borns from mothers with diabetes.

Congenital diaphragmatic hernia is a malformation which is associated with a high mortality.

This anomaly is defined as an anatomical defect of the diaphragm muscle which leads to the protrusion of abdominal viscera into the thoracic cavity. Poor outcome for this patient is strongly related with some risk factors such as prematurity, associated congenital malformations, chromosomal defects. We report a case diagnosed post natally with right congenital diaphragmatic hernia with liver migrated into the thoracic cavity. The management of the newborn was difficult because he developed immediately neonatal respiratory distress and pulmonary hypertension.

Congenital diaphragmatic hernia is a malformation which is associated with a high mortality. The prevalence is 2,3 in 10.000 live births [1]. Left located defect is known to be the most frequent type summing 83% of the cases, while right sided anomaly is rare – 17% [2].

Congenital diaphragmatic hernia is defined as an anatomical defect of the diaphragm muscle which leads to the protrusion of abdominal viscera into the thoracic cavity. This leads to poor development of the lungs because of the lack of space but also to structural deficiencies. The diagnosis of this malformation can be made prenatally through fetal ultrasound examination.

The risk can be stratified by two elements: low lung to head ratio and liver protrusion into the thoracic cavity. Prenatal diagnosis can provide valuable knowledge in the sight of a better postnatal management [3].

37-year-old pregnant woman, gravida 1, para 0, with a diagnosis of 33 weeks of pregnancy, single, live fetus, addresses to the Clinical Department of Obstetrics and Gynecology of the “Pius Brinzeu” Emergency Clinic County Hospital Timisoara, for uterine contractions.

Prophylactic, antispasmodic, dexamethasone 4 doses of 6mg at 12 hours for prophylaxis of hyaline membranes were decided and established. Corticotherapy was instituted under the control of harvested wheat and postprandial glycemia and under basal insulin therapy at 4 o’clock in the evening. at the diabetologist’s indication. Clinical and cardiotocographic monitoring of the patient was performed. A reactive rhythm and the sporadic presence of contractions were revealed. At 35 weeks of gestational age, it was decided to have a caesarean delivery for the indication of acute fetal distress. A live female fetus, weighing 2800g, was extracted. Apgar score at 1 minute was 3, 5 minutes 2, 10 minutes 3. At birth, the newborn presented with pale tears, cyanotics, generalized hypotonia, severe bradycardia, spontaneous breathing. Required neonatal resuscitation with IOT + VPPO2 60% + MCE + adrenaline administration 1/10000 on SET.

The newborn was transferred to the Neonatal Intensive Care Unit with severe general condition, pale cyanotic tears, intercostal and subcostal circulation, generalized hypotonia, oropharyngeal secretions. Place in the incubator with servocontrol and monitor vital functions. SatO2 = 88%, AV = 142bpm. VM/IPPV is maintained with the following parameters FiO2 = 100%, FR = 60/min, PEEP = 5, TI = 0.4sec, PIP = 22. The umbilical vein is catheterized, blood is collected for laboratory analysis (AGS, HLG, BCH+CRP, Hemocultura). Radiology service is requested, chest radiograph is performed. The appearance of the first X-ray was matte glass, without visualization of liver opacity with the presence of stomach gas bubble and intestinal anesthesia in the abdominal cavity. It is decided to administer the surfactant (200mg/kgc) on the SET.

According to the results of the blood gas analysis, the alveolo-arterial oxygen gradient according to the formula (GAA) = (7xFiO2) - (pCO2+pO2) is calculated, resulting in GAA = 548, which means persistent pulmonary hypertension grade III.

A chest X-ray is performed that reveals the same aspect as the previous assessment. 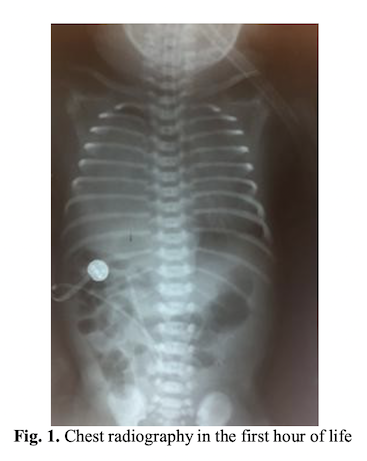 Structure of the parenchyma with vessels, a liver appearance that is basically contoured by seemingly normal but possibly ascended aspect. No liquid in the Morris space. Posterior aspect of the apical and apiomedial lung is visualized, but basal and medobasal parenchyma is retained. Left wrist: Cohesive B lines, appearance of small pneumothorax. Conclusion: Aspect that advocates elevated liver, possibly right pulmonary hypoplasia or compressed lung appearance.Following the results of the interdisciplinary consultations it is decided to request a pediatric surgical consultation for the transfer to the Pediatric Surgery Department of the Emergency Hospital for Children “Louis Turcanu”, where the suspicion of the diagnosis is confirmed and the surgery is performed in order to correct the congenital defect.

Postoperatively, evolution is unfavorable, pulmonary hypertension is increased, hemodynamic instability is maintained. At 72 hours after birth the newborn dies.

By the congenital defect of the diaphragm muscle, the abdominal viscera ascend into the chest cavity. In case of malformation located on the left side the stomach or intestines ascend and is considered the most frequent form. Situation on the right side of the diaphragm lesion with liver ascension as it is in the case reported above is considered a rare lesion with an unfavorable prognosis [5]. Diaphragm malformations located on the right side are associated with evidence of later symptoms in evolution and are usually of the gastrointestinal type [6].

In the case of the onset of the onset it was with respiratory symptomatology, requiring intubation. A severe respiratory distress syndrome was suspected due to surfactant deficiency, for which a chest radiograph was performed which looked matte and led to the decision to administer surfactant. The therapeutic role of exogenous surfactant in the postanatal management of severe functional syndrome associated with congenital diaphragmatic hernia remains uncertain. Doppler ultrasound and/or cardiotocography may reveal changes in acute fetal distress that require emergency cesarean delivery as in the case presented [7, 8, 9].

If the prenatal diagnosis of this congenital anomaly does not exist, the question arises whether respiratory distress syndrome occurred on a prematurely debilitating lung surfactant or was caused by a congenital malformation that associates respiratory symptoms. It remains at the discretion of a neonatologist who is experiencing an emergency if he or she does not administer an exogenous surfactant [10].

Depending on the degree of pulmonary compression, various complications can be observed. Lava et al., reports complications such as contralateral lung atelectasis [11].

Massive gastrothorax with mediastinal shift and collapse of the left lung as a complication of congenital diaphragmatic hernia was reported by M. Al Ghafri et al., [12]. Pulmonary hypertension is a pathology that is associated with congenital diaphragmatic hernia and which contributes to increased mortality [13]. Newborns with pulmonary hypertension show birth generalized cyanosis secondary to the right-left extrapulmonary shunt and require immediate neonatal revascularization maneuvers. In this case the newborn needed resuscitation at the birthplace followed by IOT.

Using computerized numerical simulation methods, it is possible to carry out studies related to changes in the blood circulation over time [14, 15, 16] and which could bring very useful information in the therapeutic behavior [17, 18, 19].

It is important to mention the prenatal diagnosis of this congenital malformation for better management both antenatal and postnatal. In some specialized centers fetoposcopic methods are applied antenatally which consist of endoscopic tracheal occlusion [3].

In the study by Garne et al., a prenatal detection rate of 59% of this congenital anomaly is reported leading to immediate postnatal adequate therapy [20].

The psychological counseling of the patient regarding the the malformative pathology of the fetus is very important in order to avoid depressive disorders that may occur after birth [21].

It is recommended that newborns diagnosed with congenital diaphragmatic hernia to be intubated immediately after birth or at the time of diagnosis to prevent complications such as pulmonary hypertension. Mechanically assisted ventilation must be adjusted so as to maintain inspiratory pressure to avoid contralateral lung damage [22].

In the case presented in this paper, the diagnosis of congenital diaphragmatic hernia was postnatally based on paraclinical investigations – thoracic radiography, pulmonary ultrasound, cardiac ultrasound and intraoperative support. Surgery is postponed until hemodynamic stabilization. Solving the congenital defect can be a challenge for the pediatric surgical team in terms of its size. If a small defect can be solved by a primary suture, a large defect requires prosthetic material or

biological material grafts such as abdominal muscles or latissimus dorsi [23]. In the presented case it was discovered intraoperatively that malformation was a diaphragmatic relaxation and reduction of the liver in the abdominal cavity. After reducing the pressure exerted by the liver’s ascension into the thoracic cavity, a lesion of the right lung appears not to expand.

Surgery was well tolerated by the newborn but postoperative evolution was unfavorable due to the association of pulmonary hypertension with the right lung and the hemodynamic instability leading to death.

Prenatal diagnosis of congenital diaphragmatic hernia would lead to better postnatal management as well as subsequent progression. Introducing a treatment protocol for these newborns affected by ascending abdominal viscera in the chest cavity would be a real help for the multidisciplinary medical team that intervenes to solve a high mortality pathology.

However, there are cases where the positive diagnosis is sustained postnatally when clinical signs and paraclinical investigations direct the diagnosis.

[1] “Victor Babeş” University of Medicine and Pharmacy from Timisoara, Department of Obstetrics and Gynecology (ROMANIA).