Giant ovarian cystic tumours are rare. Histologically, most of them are cystadenomas, either serous, or mucinous. Only 10-15% are malignant or borderline tumours. We are presenting the case of a 41 years patient hospitalized for important abdominal growth started

8 years ago and who weighted 125 kg on hospitalization. ROMA score is 31.24% because of CA 125 (87,74 IU/ml). CT scan revealed a giant cystic pelviabdominal mass (46/55/60 cm), with benign features. Intraoperative 55 litres of lightly brown liquid were evacuated, followed by left adnexectomy. Histopathological exam identified association between complex mucinous cystadenoma with elements of endometriosis and serous cyst. The patient was discharged on the 9th day postoperative, after an eventless evolution, weighting 57 kg. For giant cystic ovarian tumours with benign preoperative features, which cannot be removed intact, it is acceptable treatment by puncturing their content, followed by cyst excision.

Coordination and multidisciplinary collaboration are mandatory keys for the success of a complex case.

Cystic ovarian tumours are frequent, appearing in all stages of age of woman, being reported with 14.1% incidence in screening [1]. Histologically, primary ovarian tumours are classified in 9 types, epithelial serous and mucinous tumours being the most frequent [2].

Benign mucinous tumours are larger than serous ones and could become giant. They are unilocular or may have few septa, with smooth external surface. Their content is slimy, yellow and clear [3]. Ovarian tumours seldom become giant due to the early diagnosis as a result of the access to medical services. There is no consensus on the terminology of giant tumour, but it is accepted for tumours that overcome the umbilicus or those over 20 cm and only 10-15% are borderline or malignant [4].

Abdominal examination shows important distension by giant mass 60/50 cm, which goes from the pubic symphysis to xiphoid process and costal margins, with collateral circulation and cutaneous tension, regular, smooth surface, renitent, in tension, unpainful. The umbilicus is displaced inferiorly and the tumour engages supra-umbilical region. Abdominal circumference – 160 cm and the distance from the pubis to xiphoid process is 99 cm. 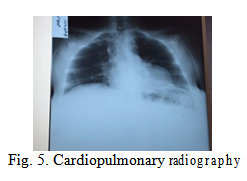 Abdominal ultrasound did not help the diagnosis in this case due to the limit of ultrasound beam penetration until the posterior tumour wall and it only showed homogenous anechoic content of the cyst and thin anterior wall, no septa or vegetation.

The patient has taken psychological counselling pre-surgery and plastic surgery examination in view of abdominoplasty, which will be performed after the intervention in order to allow the recovery of connective and elastic tissues and abdominal muscle tonus.

Based on pre-surgery data, the tumour is most probably benign. Under general anaesthesia, a 20 cm supra-umbilical upper abdominal midline incision is performed. It is ascertained the adherence of the cyst wall to the abdominal wall, no ascites in peritoneal cavity. Abdominal cavity is sealed off and it is evacuated slowly, 1 litre/minute, approximately 55 litres light brown content. After aspiration, cyst wall is separated from anterior and lateral abdominal wall, which permits pelvis examination and visualisation of left ovary tumour origin, with 360º twisted pedicle, left fallopian tube thinned out, adherent to the inferior pole of the cyst, right ureter dilated, with 8 mm diameter, uterus myomatosus, right adnexa not visualised. Left adnexectomy was performed, followed by peritoneal lavage and multiple drainage.

Areas of granulation tissue from epithelium with hemosiderin laden plead for a possible endometriosis stromal component, also correlated with light brown colour of the liquid evacuated.

The golden standard regarding surgical treatment consists in intact tumour excision [8]. In the case presented, the weight estimated preoperative and the adherence to the abdominal wall and retroperitoneum, made impossible this attitude. Intra operative tumour drainage prevents splanchnic shock when a compressing vena cava tumour mass is suddenly released [9].

Intraoperative drainage was successfully performed also when giant benign cysts were removed laparoscopic [10-11]. Preoperative paracentesis by inserting a drain inside the tumour and slowly evacuation for several days is also disputed, due to the risk of infection, adhesions and implantation of cancer cells and it should be performed only to alleviate cardiopulmonary impairment [12]. In paediatric surgery, drainage followed by laparoscopic excision became standard in surgical treatment of giant tumours. More studies were published over the last years analysing cyst excised after intraoperative puncture, without secondary complications or pseudomyxoma peritoneal [13]. Cases of pseudomyxoma were reported only after mucocele appendicular or ovarian mucinous cystadenocarcinoma [14].

The association inside the same cyst of mucoid, serous and endometriosis elements represents a particularity of the case and suggest the origin in the surface epithelium.

Endometriosis also explains the increased CA 125 level. Complex mucinous cystadenomas are constituted by more locular spaces, some with peripheral arrangements like daughter cysts or acini, realising a pseudo invasive pattern. The complexity of glandular and papillary arrangements could be important, the presence or absence of the invasion being sometimes difficult to evaluate [15]. The difference from mucinous borderline tumours consists that the epithelial proliferation, stratification and atypies do not surpass 10% from tumour in case of mucinous cyst.

Previously, in Romania only one giant ovarian weighting 30 kg case was reported [16]. Estimated to 60 kg, the case presented is the largest ovarian cyst reported until nowadays in our country.

Multidisciplinary coordination and collaboration represent mandatory requirements for the success of a complex case. Operative team consisted of a gynaecologist, 3 general surgeons, anaesthetist. Other specialists – pathologist, a physical and rehabilitation specialist, plastic surgeon and psychologist are contributing to the patient’s recovery.