The question of how long it takes to reach a usable standard of English is vitally important to teachers and learners alike. Although this question has been widely discussed in both technical and non- technical contexts and many different estimates are available, there is an absence of quantitative studies such as might support these estimates with evidence from the actual performance of English learners. The problem is substantially complicated by the huge variation in types of learners, contexts for learning, and learners’ objectives, which make any findings difficult to generalise across the whole field. The research presented here is (as far as the presenters are aware) the first to offer numerical evidence to support claims for the time taken for typical learners to pass standard milestones in English language learning. It is drawn from a study of the anonymised study records of over 160,000 adult students currently enrolled with Wall Street English from 27 different countries, and with 17 different native languages. The study times found are then compared with estimates provided by other highly regarded global English language assessment organisations.

1.3 Purpose and design of the present study

2.2 Alignment of WSE Levels to CEFR and GSE

3.1 Collecting, cleaning and filtering the data

3.2 Comparisons with other studies

There are many interdependent variables governing the answer to the question of how long it takes to learn English:

-     Study process and context: in an English-speaking country or not, intensity, mode (online or classroom based), contact with teacher, opportunities to practice.

The present study looked at a large learner group with a range of L1s from highly dissimilar to English (e.g. Mandarin) to very close (e.g., French), with a common skill focus (General English) and not exam-focused. All of them were studying in non-English-speaking countries, non-intensively, and using  the  same  study  mode,  with  the  same  amount  of  contact  with  teachers  and  the  same opportunities for practice. They were similar therefore to the vast majority of adult English language learners around the world.

There are a number of widely circulated claims regarding the amount of time typically taken to progress through the Common European Framework levels [1]. The most prominent of these is produced by Cambridge Assessment, in a publication aimed at teachers in the English Profile series.

A similar claim is made by Huan Japes, chief executive of English UK, the trade body for UK language schools: “… a rule of thumb is 360 hours – 120 hours for each of three stages – to get to the standard the government expects [to be granted citizenship – B1 on the CEFR] …” [3].

Similar claims are to be found on the websites of many English language teaching institutions; yet, as Benigno, de Jong, and Van Moere point out, “The … six main levels from A1 to C2 [are] often erroneously interpreted as all being of equal width. However, the logit [logarithmic] scale underlying the CEFR scale reveals that its levels are not equidistant – with A2, B1, and B2 being about twice as wide as the A1 level. … [This implies] … that learners will take much longer to move from A2 to B1 than to move from A1 to A2.” [4]

Especially for ‘slow’ learners and for the higher levels, these figures are dramatically different from those generally proposed by the English language-teaching industry.

1.3 Purpose and design of the present study

The present study aims to establish the time taken for Wall Street English (WSE) students to move through the levels of the CEFR, using aggregated data from large numbers of learners. The study rests on two sets of data:

i)    the alignment of WSE Levels to the CEFR and GSE, and

ii)   the time taken by WSE students to progress through CEFR and GSE levels. The following section describes how these sets of data were compiled and analyzed.

2.2 Alignment of WSE Levels to CEFR and GSE

The fact that the syllabus was constructed using Pearson’s GSE Learning Objectives does not guarantee that learners are actually acquiring the language capabilities in question, merely that they are  presented with content appropriate for  acquiring them. A  further test  was  needed to  verify students’ ability to produce the language they are being taught.

WSE carried out a large-scale study using Pearson’s Progress test [8] on over 1500 learners [9]. The conclusion confirmed the alignment of WSE Levels to CEFR/GSE summarized in the following chart, which shows the fit of expected to predicted test scores, with upper and lower bounds of 95% confidence: 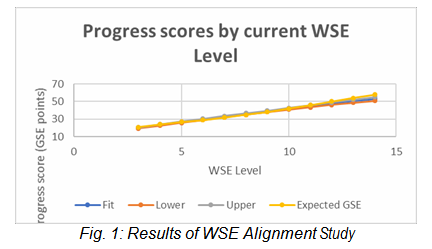 No firm conclusions were drawn for WSE Levels above 14 (CEFR B2 and C1), due to a lack of reliable data (fewer than 4% of WSE students are at these levels).

WSE operates a ‘flipped’ learning model [10] [11], in which students develop familiarity with new language content in online multimedia study before practicing it with teachers in a highly focused small-group teacher lesson called an Encounter. There are also digital workbooks for ‘homework’, and optional supplementary activities such as conversational (Complementary) classes and Social Clubs.

For the purposes of comparison, the core (compulsory) guided learning activities (Multimedia and Encounters) were considered. These correspond to the ‘guided learning’ referred to in the Cambridge Assessment definition. The unguided homework (Workbooks) are considered separately below.

3.1 Collecting, cleaning and filtering the data

Records were gathered in May 2018 of the time taken for each student to complete each activity at each level. The following chart shows the average number of times any activity in a level was completed. As students can only complete any given activity once, this indicates how many students were studying at each level during May 2018.

The following chart shows the distribution of WSE students enrolled in May 2018 across major language groups: 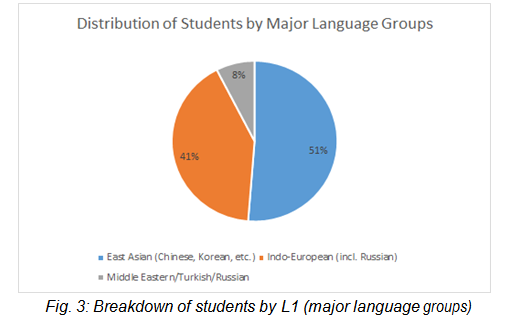 The average total study time in hours per level was computed, applying a 5% trimmed mean (removing the top and bottom 5% of timings) to the online multimedia activities. This was in order to eliminate students whose recorded study times did not accurately reflect time spent studying because on one or more occasions they started an activity and then left it without finishing it or logging off. When they returned to complete the activity, the time spent away would be added to the activity time, giving a false result.

3.2 Comparisons with other studies

The following chart compares the Cambridge Assessment [12] with WSE learners (guided instruction – Multimedia and Encounters – only): 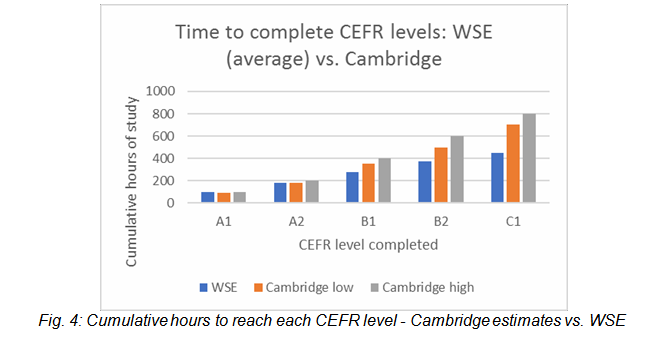 -     The WSE estimates for B2 and C2 are tentative and may need revision following further studies.

-     The WSE figures represent a global average across all students, including China.

-     As the Cambridge Assessment figures [13] are in the form of a range, both low and high estimates are shown.

-     The WSE hours include time spent on levels 1 and 2 (below A1). This, as explained above, is not considered in CEFR-based learning programs, as no learning below A1 can be assessed within the framework.

The WSE figures will now be compared with the Cambridge and Pearson estimates [14]: 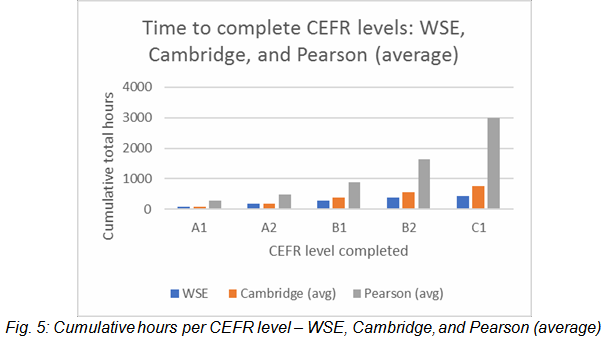 The huge difference between Pearson’s estimates and the others is explained by the fact that the study times for ‘slow learners’ are 3 to 4 times those for ‘fast learners.

The Cambridge and Pearson definitions do not relate to the same definition of study: Pearson also includes written exercises not corrected by or discussed with teachers (“… time explicitly devoted to learning the language, through instruction and exercises.” [15]).

Time spent studying including the WSE digital Workbooks is compared with Pearson’s average figures in the chart below:

It would be easier to draw firm conclusions from the above if other large-scale international English teaching organisations had carried out or published similar studies.

i)    Pearson’s ‘slow learner’ estimates appear to be outliers, while WSE, Cambridge and Pearson ‘fast learners’ track each other fairly closely up to B1.

ii)   ‘Guided learning’ times for WSE students are generally below the Cambridge lower estimates, and the gap becomes wider at higher levels.

iii)  ‘Active study’ times (i.e. including digital Workbooks) are considerably lower for WSE students than for the average of Pearson’s estimates.

iv)  WSE students can expect to reach the end of the B1 level on the CEFR in 21% fewer guided learning hours than estimated by Cambridge Assessment, and, with Workbooks included, 42% fewer than the Pearson estimates (average learners).