In the last three hundred years or so, the scientific knowledge has allowed an outstanding technological development. Despite manyefforts, there are still compelling challenges that must be won. We are unable to predict catastrophic events, such as earthquakesand volcanic eruptions. We struggle to avoid climate change and the warming of the Earth. We should exploit the energy and food resources without deteriorating the stability of the ecosystems and their biodiversity. There are still incurable diseases that must be defeated. We strive to predict the economic and financial crisis. Moreover, we would like to guarantee stability in our societies. Whenever we tackle such challenges, we deal with Complex Systems, which are the geology and the climate of the Earth; the ecosystems; the living beings, particularly, the human immune system and nervous system; the global economy and the human societies. In order to prepare the new generations of students to be ready to tackle the challenges that regard the Complex Systems, Ihave written a book titled “Untangling Complex Systems: A Grand Challenge for Science.” This book is an account of a marvelousinterdisciplinary journey I have made to understand the properties of the Complex Systems. I have undertaken my trip, equipped with the fundamental principles of physical chemistry, especially, the Second Law of Thermodynamics that describes the spontaneous evolution of our universe, and the tools of Non-linear dynamics. By dealing with many disciplines, in particular, chemistry,biology, physics, economy, and philosophy, I show that Complex Systems are intertwined networks, working in out-of-equilibriumconditions, which exhibit emergent properties, such as self-organization phenomena and chaotic behaviors in time and space. It is not possible to describe Complex Systems accurately from their ultimate constituents (i.e., atoms and molecules) due to computational reasons. Therefore, it is necessary to develop models. In my book, I propose the interdisciplinary research line ofNatural Computing as a promising strategy to comprehend Complex Systems and win the challenges that humankind is facing.

2. The properties of Complex Systems

3. How to untangle Complex Systems

Two universal forces drive humanity to inquire into nature and gather rigorous and reproducible information about natural laws. The first one is the desire of satisfying our “epistemic curiosity” by trying to answer the question “Which is the origin of the beauty in nature?”.

The second one is the will of improving the psychophysical well- being of humans by solving practical problems. In fact, scientific knowledge has always promoted the technological development, and the purpose of technology is that of improving humanwell-being. Science and technology interact mutually through positive feedback actions (see Figure 1).

To have an idea of how far science and technology have arrived, it suffices to say that, nowadays, we can observe astronomical events that take place billions oflight-years far from the Earth and we can send robots in other planets of the Solar System, such as Mars. At the same time, we can detect atoms and subatomic particles; we can manipulate matter at the molecular level and engineer the DNA of the living cells.

Despite many efforts, there are still challenges that must be won. We are unable to predict catastrophic events on Earth, such as earthquakes and volcanic eruptions.

We struggle to avoid the warming of our planet. We want to exploit the energy and food resources without deteriorating the stability of the natural ecosystems and their biodiversity. There are still incurable diseases. We want to eradicate poverty from the Earth. We dream of predicting and avoiding the economic and financial crisis. We hope to guarantee justice and stability in our societies.

Whenever we tackle one of these challenges, we deal with Complex Systems, such as the geology and the climate of the Earth; itsecosystems; the living beings, in particular, the human immune and nervous systems; the macro-economy, and the human societies. All these systems are so diverse from each other. However, they are all named as Complex Systems because they share some common features [1].

2. The properties of Complex Systems

Every Complex System is (I) a network that works in out-of-equilibrium conditions, (II) exhibits emergent properties, and (III) itsbehavior cannot be predicted, especially in the long term [1]. Any Complex System involves either inanimate matter or living beings or both.

A Complex System is composed of many constituents, which often are diverse, if not unique. These constituents are strongly interconnected. Therefore, a Complex System can be described as a network. Such natural networks are maintained far from the condition of thermodynamic equilibrium by external and/or internal gradients of intensivevariables, such as temperature, pressure, concentrations of chemicals, et cetera. Complex Systems that involve only inanimate matterare driven by force fields.

The whole is more than the sum of its parts, as alleged by Aristotle. An example of an emergent property is the power of Complex Systems to self-organize in time and originate periodic processes. For example, a living being is like a house with clocks in every room and every corner, yet in one way or another, these chemical clockssynchronize.

If we consider a single cell, we find some signaling, genetic, and metabolic processes that are periodic and stronglyinterconnected. These interconnections originate cyclic processes at the organ and physiological levels.

Many of these processes show circadian rhythms because they synchronize with the day and night cycle. Spontaneous periodic processes can also be encountered within an ecosystem. For instance, the relationship between predators and preys [2]. 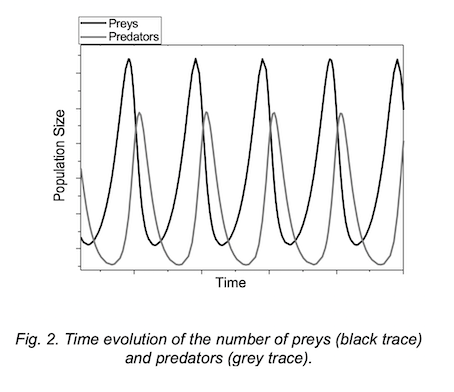 We can find periodic processes also in economy. The business cycles are the spontaneous periodic variations of the GDP of a nation, which, after the phase of growth and the peak, always shows the phases of recession, depression, and recovery, in a cyclic manner [3]. Phenomena of temporal self-organization can also be discovered in a chemical laboratory [4].

Complex Systems can also exhibit the emergent property of spatial self- organization. An example is the formation of chemical waves [4, 1]. A chemical wave is the propagation of an autocatalytic reaction in an excitable medium. An example is fire. The fire is autocatalytic because the high temperatures that are reached in a fire feed the fire itself. The fire propagates in any space where there is fuel.

Electrochemical and mechanical waves propagate through the tissues of our hearts. They are responsible for the function of the heart as a pump. Calcium waves are generated in an egg cell when it is fertilized; they trigger the embryogenesis. Chemical waves are used by micro-organisms to communicate; et cetera.

Another example of spatial self-organization is the formation of ordered structures, such as animal markings, phyllotaxis, embryo, and dunes, all known as Turing patterns. They derive from the spatial competition between an autocatalytic species and its inhibitor, having appreciably different diffusion coefficients.

A chaotic dynamic is another example of an emergent property. A dynamic is chaotic when it is aperiodic, extremely sensitive to the initial conditions, and hence unpredictable in the long term. There are quantitative parameters that allow us to distinguish a chaoticfrom a stochastic dynamic, such as a positive Lyapunov exponent and a fractal correlation dimension of the chaotic attractor (for moreinformation see [1]). In fact, a peculiarity of any chaotic dynamic is that of generating fractals. A fractal is a self-similar geometricstructure, whose dimension is not necessarily an integer [1].

Another property of the Complex Systems is that their behavior cannot be predicted, especially in the long term. Why? There are three principal reasons. First, if we try to describe any Complex System from itsultimate constituents, i.e., atoms and molecules, we face exponential problems having large dimensions (see [1] for more details). We know from the theory of Computational Complexity that we cannot solve accurately and in reasonable time exponential problems having large dimensions.

Third, the measurements of the initial conditions of a Complex System are always affected by unavoidable uncertainties and errors. Therefore, if the Complex System exhibits chaotic behavior, its dynamic is unpredictable in the long term, by definition.

3. How to untangle Complex Systems

Aware of the limits we have in the description of Complex Systems, how can we face the Complexity Challenges? Weneed to improve the ways we collect, store and process information. There are two principal strategies to succeed. One strategy is by improving our current electronic computers. The other strategy is the interdisciplinary research line of Natural Computing.Scientists working in the field of Natural Computing draw inspiration from nature to propose new algorithms; new materials and architecture to compute; new models and methodologies to interpret the Natural Complexity. The fundamental rationale is thatinformation can be encoded through the states of any natural system. For instance, in the field of Chemical Artificial Intelligence, thestates and evolution of suitable chemical systems mimic the behavior of the human nervous system [5].

In conclusion, if we consider the humankind journey to discovering the secrets of nature, we can say that it has beenpunctuated by two revolutionary intellectual events.

The first one was the birth of philosophy in the ancient Greek colonies, during the 6th century BC. The second one was the formulation of the scientific method, proposed by Galilei and Newton in the 17th century AD, which is based on the experiments as tools for inquiring nature. Now, we are expecting a third revolutionary event that will allow us tountangle Complex Systems. This event seems close, but it is still unknown in its details. However, as Einstein rightly alleged, by learning from yesterday, living for today, and hoping for tomorrow, the important thing is that our students and we never stop questioning.