Exposure to heavy metals at workplace has a great impact on population health. In particular, exposure to lead is considered one of the oldest occupational exposures. Chronic lead poisoning in workers with long history of exposure to heavy metals result in different organ dysfunctions: nervous system, kidneys, liver or gastrointestinal system, accompanied by increased lead levels in the blood and the urine, and secondary anemia induced by the presence of the lead in the organism. CaNa2EDTA chelation therapy represents at the same time a diagnostic method, but also an effective measure of treatment.

Environmental pollution with heavy metals is as old as human ability to melt and process ores. Exposure to heavy metals has been known for thousands of years. In particular, exposure to lead is considered one of the oldest occupational exposures. Lead and its compounds play an important role in modern industry, being still the most used non-ferrous metal. Along with lead, other heavy metals encountered in professional exposure are cadmium, zinc, copper, mercury and manganese.

High concentrations of metals in the environment and workplace may lead to the accumulation of these toxic substances in the body, thus increasing the risk of chronic diseases such cancer, neurological degenerative disturbances or different organs and systems diseases [1]. The effects of lead are characterized by a cumulative effect; general disorders are accentuated as lead accumulates in the body. Initially, manifestations are not characteristic: weakness, asthenia, joint pain, digestive disorders [2].

In chronic lead poisoning several syndromes are described: asteno-vegetative, nervous, anemic, digestive, cardiovascular, and renal syndrome. The harmful action of lead in the human body include: blocking the synthesis of hemoglobin and the red blood cell membrane, a process leading to anemia; toxic action on the  nervous  system  producing motor neuritis and encephalopathy; morphological and functional lesions in the kidney that can lead to nephritis; endarteritis and vascular spasm [1].

The hypertension induced by the presence of lead in the body has been suggested to result from the reduction of nitrogen monoxide (NO) activity in the walls of the blood vessels. Studies conducted by Vaziri et al., (2001) showed that lead increases the amount of NO in occupationally exposed persons by increasing nitric oxide synthase (NOS), a mechanism of NOS overexpression being also suggested [3]. In severe stages, lead intoxication is manifested by seizures, paralysis of the limbs, coma and ultimately death.

This paper present four case reports of workers in Copsa Mica metallurgical smelter and hospitalized in a Labor medicine clinic in Sibiu in the period 2010-2015. All patients had a long history of workplace exposure to heavy metals and they were diagnosed with occupational lead poisoning as primary diagnostic. Clinical presentation, occupational exposure data, laboratory findings and treatment during hospitalization are provided.

Description of the study area

Copşa Mică is a small town located in the north-west of Sibiu County (geographical coordinates 46°6′45″N and 24°13′5″E). This region was considered “one of the five most polluted industrial sites of the communist world” as reported in the Atlas of Our Changing Environment [4]. Copşa Mică metallurgical plant was established in 1939-1940 and included equipments for Zn and Pb extraction, recovery of Cd and other metals such as bismuth, gold, silver and antimony. In 1998 the factory has entered into a phase of ecological rehabilitation, and presently its activity was reduced to the recovery of heavy metals from the equipment [5].

The long operation of this industrial unit induced an extensive environmental contamination (air, water and soil pollution) in the region. Previous research found that lead and cadmium are the dominant pollutants accumulated in soils and vegetables harvested from these contaminated soils [6].

Clinical presentation, occupational exposure data and laboratory findings of patients are summarized in Table 1 and Table 2.

A male worker, aged 37 years and 14 years history of occupational exposure to heavy metals, presented with complaints of diffuse abdominal pain, loss of appetite and fatigue. Clinical examination revealed gingival pigmentation (Burton’s line) which is a specific sign of chronic exposure to lead [6]. The patient was diagnosed before with chronic gastroduodenitis. 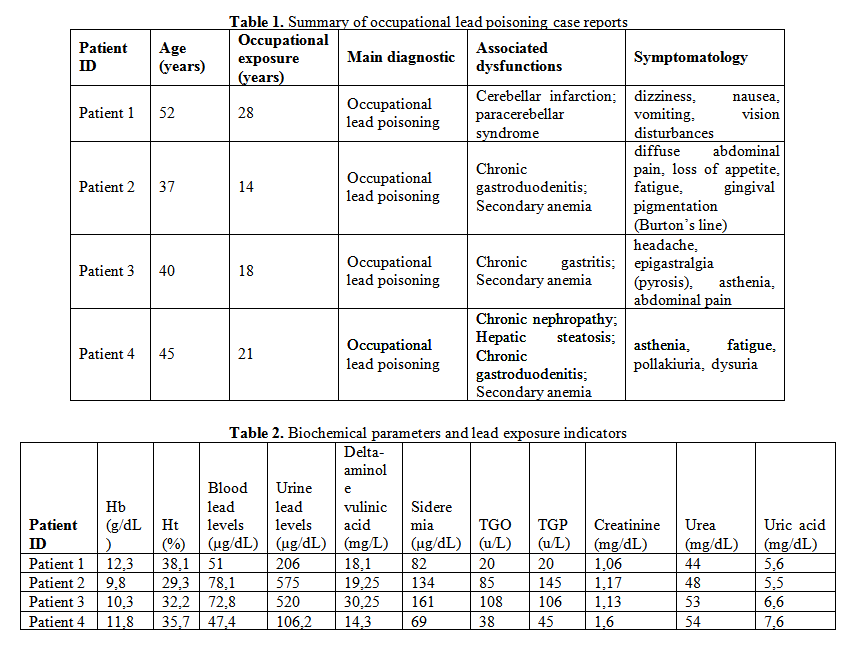 All patients had a long history of occupational exposure to heavy metals (14-28 years) and elevated blood and urine lead levels. The reference blood lead level (BLL) for adults was designated 5 µg/dL [7]. The U.S. Occupational Safety and Health Administration (OSHA) established standards for occupationally exposed workers and recommend that workers to be removed from lead exposure when blood lead levels are equal or higher than 50 µg/dL (construction industry) or 60 µg/dL (general industry) and allow workers to return to work when the BLL is below 40 µg/dL [7].

One of the primary effects of lead is inhibition of heme synthesis, with subsequently anemia. The secondary anemia was present in three of the four presented  patients. The hematotoxicity mechanisms are based on  the inhibition of several enzymes in  the heme biosynthesis pathway: delta-aminolevulinic acid dehydratase (ALA-D), delta-aminolevulinic acid syntetase (ALA-S), coporphyrinogen oxidase and ferrochelatase (Fig. 1). ALA-D is strongly inhibited by lead in human organism.

The degree of ALA-D inhibition has been used clinically to quantify the degree of lead poisoning [8]. Inhibition of this enzyme by lead has been demonstrated in circulating erythrocytes, but also in the kidneys, bone marrow, brain, liver and heart. Inhibition of the enzyme begins at blood lead levels of 10-20 μg/dL and is quasi-complete at levels of 70-90 μg lead/dL [9]. Decrease of ALA-D activity leads to high levels of delta-aminolevulinic acid in blood, one of the biomarkers of early lead biochemical adverse effect in population exposed in contaminated workplaces, but also in low levels exposure situations as seen in the general population [10].

The accumulation of δ-aminolevulinic acid (δ ALA) also contributes to oxidative stress of cells through auto-oxidation (Fig. 1). Inhibition of ferrochelatase,  another  enzyme  that  occurs  in  the  synthesis  of  the  heme,  leads  to  the accumulation of iron in the blood. Two patients associated severe anemia with increased sideremia, a common condition in lead poisoning. 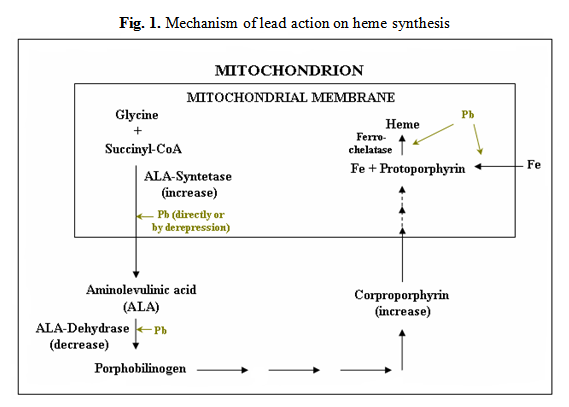 Lead induces cellular toxicity through multiple mechanisms: calcium substitution (without replacing  its  functions) in a series of receptor-dependent or enzyme mediated transport processes; production of oxidative stress through initiation of membrane lipid peroxidation by stimulating ferrous ions; inhibition of nitric oxide synthases or alteration of gene expression with over-expression of pro-inflammatory cytokines and enzymes that mediates neuroinflammation [12, 13].

Also, the exposure to lead results in depletion of gluthatione reduced (GSH) reserves and accumulation of lipid peroxidation products. Subacute exposure to lead modifies the activity of the glutathione-related enzymes, such as GR, GST, and G6PD [14]. Many factors, such as history of lead exposure, the duration of such exposure, and age are influencing the response of an exposed individual to the toxic action of lead.

In brain the effects are based on lead’s ability to pass through the blood brain barrier by substituting calcium ions and the influences on neurotransmitter system (glutamatergic, dopaminergic and cholinergic), mitochondria, cerebrovascular endothelial cells, astroglia and oligodendroglia [15]. Lead accumulates in astroglial cells, the glial cells being vulnerable to lead due to their deficiency in lead detoxifying protein [16]. Chronic lead exposure can alter NMDAR subunit gene expression in the brain, with impairment of learning and memory processes [17].

Lead interferes with glutamate, the most common neurotransmitter in the brain, and thus interferes with neuronal development. Biochemical changes consist of decreased cholinesterase activity, increased activity of dopamine and alteration of gamma-aminobutyric acid (GABA) activity [18].

Some authors have experimentally observed a hypervascularization in the brain, proportional to the duration of lead uptake, and cerebral haemorrhage. The exposed workers were characterized by diffuse alteration of the cerebral artery and an increase in the tonus of the blood vessels, especially in the arterioles, which may be the cause of the headache described in patient no. 2 [19].

In the kidney, lead has direct action on proximal countable tubes (Fanconi-like syndrome) and indirect action on the renal artery, with vasoconstriction and ischemia [20]. Chronic lead exposure, with blood lead levels persistently above 70-80 μg/dl, represent a risk factor for chronic kidney disease [21]. Chronic exposure to lead results in over expression of angiotensin II and intranuclear p65 NF-kβ in tubular and infiltrating cells [22].

Initiation of chelation therapy led to the elimination of lead in large quantities in the urine and the decrease of the blood lead level in all patients.

Chronic lead poisoning result in different organ dysfunctions: nervous system, kidneys, liver or gastroduodenal system, the secondary anemia joining the increased lead levels in the blood and urine of occupationally exposed patients. The treatment included forced diuresis, symptomatic and chelating therapy with CaNa2EDTA, but the most important recommendation is limitation or cessation of occupational exposure.