Endometriosis is a gynecological condition that particularly affects the organs of the pelvis, but can also occur at a distance from them. Immunohistochemically demonstrated ectopic endometrial tissue may undergo certain structural and functional changes that can lead to normal cell transformation in some hyperplasic, dysplastic and subsequently neoplastic diseases, by a strong immune system intervention, increased anti-apoptotic potency and decreased cell cycle regulation.

Endometriosis is a benign pathology, being represented by the ectopic presence of endometrial glands in the structure of organs such as the ovaries, the peritoneum, frequently and rarely the lung and even the brain. Cases of umbilical endometriosis have even been also described [1, 2].

Also, this pathology may be present at the level of the myometrium-adenomyosis or abdominal wall after cesarean section. It is associated with pelvic/ abdominal pain and infertility [3].

Endometriosis is a condition present in reproductive age [4] and is controlled by the hormonal system. The endometrial glands, ectopically located, proliferate under hormonal influence and bleed to menstruation [5-10].

The cause of endometriosis is not an exact one, but several theories involved in the development of this benign pathology have been proposed, without excluding each other.

The theory of retrograde menstruation is the oldest theory of endometrial ectopic formation. This suggests that during menstruation, part of the menstrual fluid takes a reverse path to the Fallopian tube and the peritoneal cavity, often attaching to the peritoneum [11]. This theory is not able to explain all instances of endometriosis, but along with additional mechanical, inflammatory, hormonal, genetic factors, the process can be explained (Fig. 1).

Other theories have been proposed such as: endometriosis formation of red marrow stem cells, which may explain the appearance of endometriosis at the distance from the pelvic cavity (lung, brain) [22], toxic (nichel, dioxin) [23, 24] which is based on the transformation of cells from the female genital tract during embryonic development, [25], neural growth through the expression of nerve fibers in endometriosis, but does not fully explain the ectopic formation of endometrial tissue and is not fully correlated with the occurrence of pain [26], coelomic metaplasia [27], vasculogenesis [28] or autoimmunity [29, 30]. 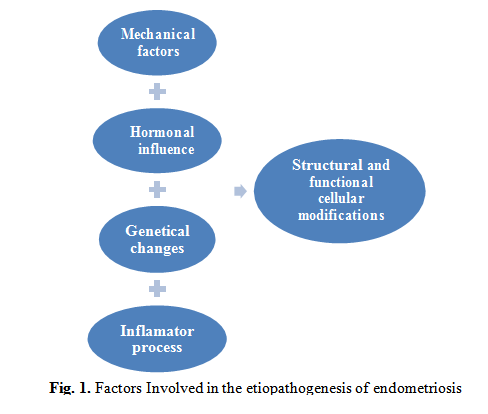 This multicenter study was conducted on a total of 42 cases of endometriosis (adenomyosis, ovarian or abdominal wall) between January 2014 and April 2018. The patients were aged 21-

53 years and had pelvic, abdominal pain and menometroragia. Tissue samples were taken, which were fixed in neutral solution of formalin 10% and processed after the paraffin inclusion technique at the Center for Studies of Microscopic Morphology and Immunology, University of Medicine and Pharmacy of Craiova. The diagnosis of certainty was histopathological.

Blocks were cut at 4 microns using the HM350 microtome. The sections were stained with the classic histological technique for Hematoxilin-Eosin and the immunostaining technique with anti-Cytokeratin 7 and anti-Cytokeratin 18 antibodies for endometrial gland markers, anti- Estrogen receptors and anti-Progesterone receptors, Anti-Phosphatase and Tensin homolog (PTEN), anti-B-cell lymphoma 2 (BCL2), anti-triptase for mastocytes labeling and anti-CD68 for macrophage marking (Table 1). 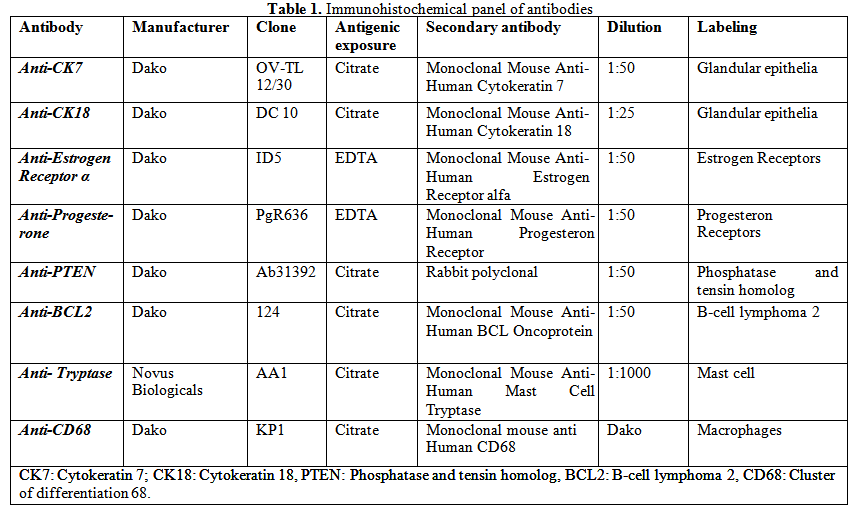 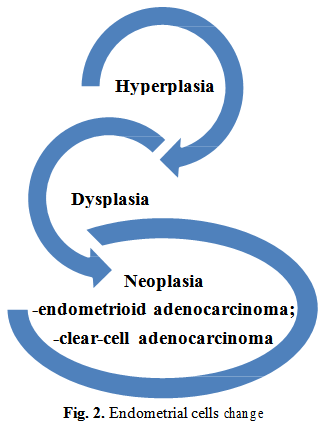 The anti-B-cell lymphoma 2 (BCL2) antibody demonstrated the involvement of an anti- apoptotic protein that plays an important role in regulating cell death (Fig. 7B). The anti- Phosphatase and tensin homolog antibody (PTEN) labeled a protein encoded by the PTEN gene (Fig. 8A).

By means of anti-Triptaze and anti-CD68 antibodies, we have demonstrated that there is a strong inflammatory reaction around endometriosis outbreaks and that the number of macrophages and mastocytes is greatly increased in these areas as opposed to remote areas (Fig.3, 4, 8B to 10). 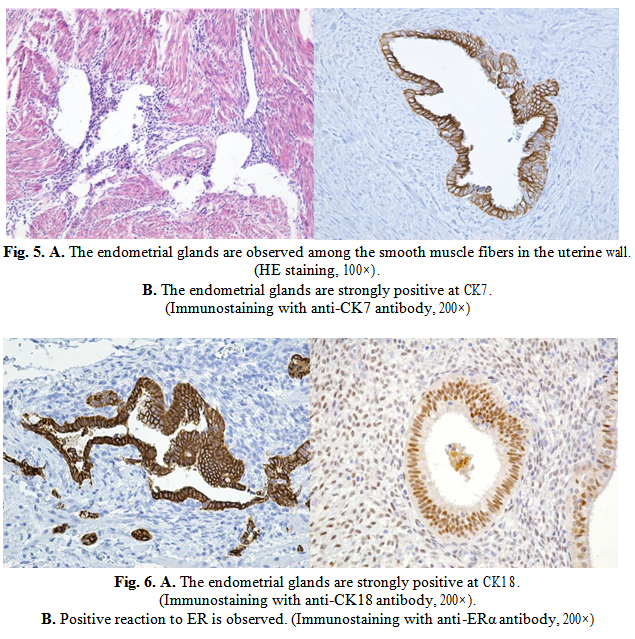 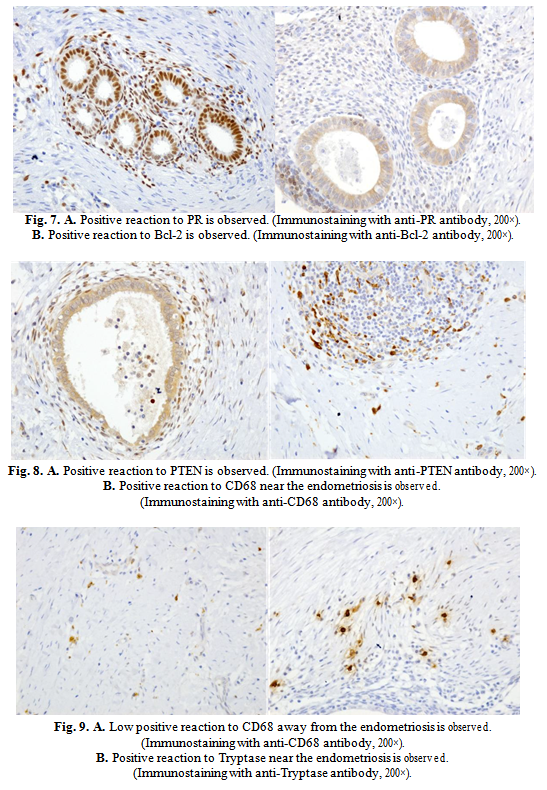 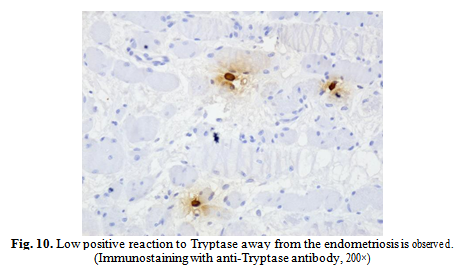 Endometrial glands ectopically located are evoked both by classical and immunohistochemical stainings. They appear in a single layer of columnar cells. CK7 is a protein expressed by KRT7 [31, 32] type II gene. It is specifically expressed in the cavitary epithelium of internal organs, glandular ducts and blood vessels. The gene coding for type II CK is located on chromosome 12q12-q13. It may have other locations, but not all of them have been fully described. CK7 occurs in glandular epithelia and transition ones. It is also found in neoplastic cells, which is why immunohistochemistry differentiates transitional cell carcinomas from ovarian cells. It is used together with Cytokeratin 20 (CK20) for differential diagnosis [33].

CK18 is a type I protein and belongs to the family of intermediate filaments.

These two cytokeratins demonstrate the endometrial origin of ectopic tissue and make a differential diagnosis with a metastasis of a digestive adenocarcinoma.

ER is part of an intracellular protein group. These receptors are activated by the estrogenic hormone (17β-estradiol) [34]. After activation, ER is translocated into the nucleui and sets the DNA to regulate the activity of several genes (the transcription factor of the DNA) [35]. There are two forms of ER, α and β. We used the anti-ERα antibody found in the endometrium, mammary carcinogenic cells, ovarian stromal cells and in the hypothalamus [36, 37]. In men, ERα is found in epithelium at the level of eferent ducts [36-38].

PRs are part of the subfamily 3 of the nuclear receptors and are activated by the progesterone hormone. PRs are encoded by the PGR gene on chromosome 11q22 [39, 40].

CK7, CK18, ER, PR demonstrate that ectopic implanted tissue is of endometrial origin. The mutations of this gene represent a step for neoplastic development.

PTEN acts as a tumor suppressor gene, and its changes influence the cell cycle and can lead to an accelerated division.

Bcl-2 is part of the Bcl-2 family of regulatory proteins involved in regulating cell death (apoptosis), either by apoptosis induction or by inhibiting it [41-44]. Bcl-2 is located outside the mitochondrial membrane and plays an important role in regulating mitochondrial dynamics.

Genetic changes of Bcl-2 have been implicated in various neoplasms such as melanoma, prostate cancer, breast, chronic lymphocytic leukemia or lung cancer, by the imbalance between cell death and cell growth. Immunohistochemical staining with the anti-Bcl-2 antibody reveals the increased reactivity of ectopic endometrial cells, which may influence evolution and transformation into hyperplastic, dysplastic and subsequently neoplastic cells.

PTEN is a human protein encoded by the PTEN gene [39], and mutations of this gene are involved in the evolution of several cancers. PTEN acts as a tumor suppressor gene through the action of phosphatase protein product. It is involved in cell cycle regulation, it prevents cells from developing and does not divide too quickly [40]. This tumor suppressor protein is lost most rapidly and frequently in human cancers. During tumor development, PTEN mutations or deletions occur by enzymatic inactivation, resulting in increased cell proliferation and decreased apoptosis. The most common inactivations occur in glioblastoma, endometrial cancer [30], prostate cancer and decreased expression is found in many other cancers, as lung or breast.

In conclusion, PTEN mutations cause a predisposition to malignancy [27].

Tryptase is produced in mast cells, representing secretion granules derived from serum proteinase. It is involved in the allergenic response and is believed to act like the fibroblast mitogen line. Serum concentration also increases greatly in anaphylactic reactions. Some genetic mutations resulting from the fusion of FIP1L1-PDGFRA may be involved in the evolution of certain neoplasms [45]. By immunohistochemical staining with the anti-Tryptase antibody, we have demonstrated that around the endometriosis outbreaks, many mastocytes are involved in the immune reaction of surrounding tissue, unlike the distant areas of endometriosis.

Immunohistochemistry detects the presence of CD68, found in the cytoplasmic granule of the described cells. Frequently, it is used as a marker for the line of macrophages, monocytes, histiocytes, giant cells, Kuffer cells and osteoclasts. Aberrant growth of macrophages can occur in severe inflammatory recurrences or in malignant histiocytosis, histiocytic lymphoma or Gaucher’s pathology [47, 48]. Around the endometriosis outbreaks, there is an increased number of macrophages compared to remote areas.

A multitude of factors are involved in the occurrence and development of endometriosis. Estrogen is a very important factor, involved in the growth and development of glands in the structure of endometriosis focuses. Decreasing progesterone imbalances hormonal status and predisposes to this pathology. The presence of genes that inhibit apoptosis and increase the rate of cell division and high immune response can influence the malignant transformation of endometriosis outbreaks, thus developing hyperplastic, dysplastic and lastly, neoplastic cells.

The histopathological examination has a mandatory diagnostic value for the choice of treatment. Treatment of endometriosis is particularly surgical, thus suppressing the pain and bleeding caused by this pathology and preventing malignant transformation of endometriosis outbreaks.