Living in digital era forces us not only to live among technology but to live with technology and use it. It should be natural that technology is used in education. However, its use must be effective, meaningful, and carefully planned. The forms and methods of teaching and learning have been affected by technology, as well as learning experience has been profoundly affected. Technology has influenced the ways of communication, learning and teaching at the same time. Significant body of research indicates that even though technology is used in language classes it frequently happens that it is used ineffectively. Interactive whiteboards are frequently used as a projection screen or LMS platforms as files storage. What more, inappropriate use of technology can hinder learning/teaching process in case it is used not to teach content but rather to present technology and its possibilities. The article brings the analysis of 162 courses prepared by 27 instructors published in LMS Moodle based on SAMR model.

Using technologies in teaching and learning has become an integral part of both, formal and informal education. Today, we may say, that ICT integration is a natural process. Especially technologies that we use on daily basis (computers, mobiles) we naturally transfer into educational process. This cannot, however, be said about e.g. interactive whiteboard, learning management systems (LMS), language labs that are used by teachers in class only and thus teachers do not have enough experience with its manipulation and operation. This means it needs special skills and knowledge that have to be acquired and developed.

Many universities introduced different electronic support to face-to-face classes, blended learning or e-courses as a part of their curricula. Some of the universities opened their education to public in form of massive open online courses (MOOC) and offer different type of e-courses for free, occasionally relatively modest fee.

In Slovakia, most schools have access to technologies and especially universities are challenged to integrate the elements of e-learning into their teaching.

There is a degree of uncertainty around the terminology in the area of distance education and educational technology generally.

The terms are often used interchangeably and without precision. In this article we discuss mainly learning and content management systems as a possible support of in- class teaching and thus we need to define at least the terms LMS, CMS (content management system) and virtual classroom, virtual learning environment (VLE). Gillespie et al., (2007) described VLE as an application collecting the tools for sharing files and information, downloading information, use  of  discussion  boards,  organising  time  and  resources  [1].  VLE  usually  includes  curriculum mapping, student tracking, online support for instructor and learner, electronic communication, and links to other resources [2].

LMS is a platform that allows managing and organizing e-learning. Recording leaners, tracking learners and their work, activity and progress, in other words it is used to “plan, implement and evaluate a specific learning process” [3]. This definition is close to that of Watson & Watson (2007, p. 28, [4]) who based on [5] define LMS as “infrastructure that delivers and manages instructional content, identifies and assesses individual and organizational learning or training goals, tracks the progress towards meeting those goals, and collects and presents data for supervising the learning process of an organization as a whole”.

CMSs are systems for content delivery. Meerts (2003) defines that it “provides an instructor with a set of tools and a framework that allows the relatively easy creation of online course content and the subsequently teaching and management of that course including various interactions with students taking the course” [6]. There are systems that combine learning and content management system, as e.g. Moodle. Moodle is frequently referred as LMS, even though comprising all its tools it is LCMS.

The term virtual class is often used as a synonym of VLE. It refers to the programme that are to large extent realised synchronously, using e.g. video, cameras, blackboard, chats and other tools for synchronous communication. Different software and platforms that enable synchronous engagement and interactions of the learners are available.

The first level, substitution, does not bring functional change in teaching and/or learning. The technology is used to perform the same tasks but using technologies. There is no real use of technology.

The second level, augmentation, is characterised by functional improvement.

The transformation levels are connected with more significant changes and new aspects that could not be achieved without technology implementation. In the modification level we do not perform the same task with different tools (substitution) but we redesign the task with added functionality. The highest level is connected with redefinition that “allows for the creation of new tasks, previously inconceivable” [7].

The LCMS Moodle was introduced at Presov University (Slovakia) in 2006 and gradually it was introduced at almost all faculties of the university. The different steps were taken at the faculties and in many cases, it was not very systematic approach, but rather based on individual teachers who are IT enthusiasts.

The survey about the use of Moodle was realised at the Faculty of Arts where the system was introduced in 2011. Four special workshops on e-pedagogy and how to use Moodle were organised (on voluntary basis) since its introduction. All teachers and students have an access to the systems.

Seven years after its installation and accommodation there are number of courses published. Out of 220 courses published in Moodle there are 58 courses that are completely empty or there is only syllabus uploaded, i.e. more than 26.36% have been never used and are inactive. Out of 197 teachers employed at the faculty there are 27 teachers (13.7%) who have created and run at least one course in Moodle. Majority of courses fulfil enhancement function and only 22.7% of the courses according to our evaluation fulfil transformative function with 22 courses achieving the level of redefinition. It has to be mentioned that the teacher who uses the highest diversity of tools and activities took part only in the first training and she studied the Moodle possibilities and tools on her own. 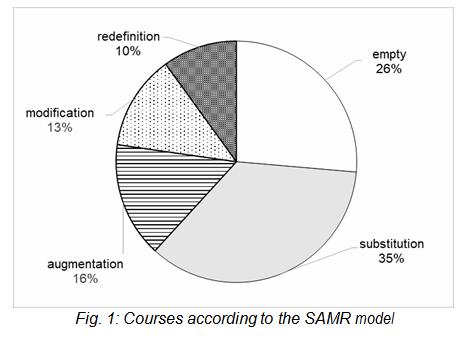 The figure visualises the ratio of the courses categorised according to the SAMR model. It was expected that number of courses would correlate with the SAMR level. However, we predicted, that six years after its existence and availability to all teachers the number of the courses evaluated as substitutive level would be lower.

We discussed the results of the analysis with 7 teachers who are active in Moodle (out of 27; 25.92%). Teachers were selected based on convenience sampling. Teachers (6F, 1M; mean age 39.4; mean time of experience with Moodle – 4 years) discussed their experience with creating and running the courses. Among the benefits they could see belong time management (not only forcing students to keep it but also themselves – to plan the activities and processes in advance and systematically), students’ tracking, possibility to develop cooperation and collaboration, permanence, material availability. On the other hand, they stressed that even though they realise all the benefits the time demandingness hinders their work on course development. They also agreed they need more training with the tools available in Moodle.

They mentioned (with satisfaction) that students automatically expect them to provide the support in Moodle, what they perceived as a way of positive feedback on courses supported by Moodle.

Students appreciate having all the materials, results, deadlines at one place and the possibility to deliver different tasks using the Moodle. Teachers confirmed they mostly use Moodle for uploading the documents, occasionally adding the task, creating the lectures or online discussions. All courses they built are used as a face-to-faces courses support. Only two teachers expressed willingness and readiness to create and run e-course. The rest of them mentioned they would love to run the course but with the support of course designers and developers. They are ready to prepare the scenarios, to plan interactions, however, they do not have skills and time to create it.

The results of the course analysis we ran were expected. Even though the teachers perceive LMS possibilities as beneficial for both, teacher and students, they agreed that unless they are not forced to use it as a compulsory component of their teaching they will probably not make use of its potential.

The very similar results were stated by [8, 9]. Limniou and Smith (2010) published the results of research focused on VLE realised at the University of Manchester and stated that most tutors used VLE as “a means for delivering learning material, announcements and assessments to students” [9].

They also used it for uploading learning material and they perceived VLE as a tool how “to overcome the difficulties of limited time”. It would be interesting to run the similar research and see how was the situation changed as this is a very similar finding we face nowadays (7 years later after the Manchester study).

We fully agree with [10] who claim that compared to other countries open education resources development in academic sphere is still in its infancy level.

This text has no ambition to present the results of research. It is just a very brief statement about the status quo at one institution that is strongly influenced by its tradition and educational philosophy.

Thus, in case we want to apply VLE for blended learning or e-learning, planning the content presentation in small steps, ways and space for practice and different types of interaction is a must. Students have to interact with material, with “classmates” and the tutor.

Creating positive, cooperative environment with the space for both, autonomous and collaborative learning is a demanding task for course writers, developers and tutors.

A considerable amount of literature has been published on effectiveness of e-learning indicating that it can be used as an alternative to traditional in-class teaching. Substitution can be useful, but frequently we cannot speak about the effective use of technology in classroom.