This work presents the design and the results of a learning unit about evolution. The project has been realized in a second year of a technical secondary school in Italy and it was designed after some reflections on frequent misconceptions in the theory of evolution. The students were asked to answer a questionnaire with eleven statements with a 4-point Likert scale. The results show that there is no association between the theory of evolution and the scientific nature of the theory itself: students do not recognize the evidence, characteristics, predictions and models as parts of the scientific method. Therefore, 10 hours learning unit on the evolution – aimed at analyzing it with the tools of the scientific method – has been designed. Particular attention in the construction and evaluation of the activities was given to the observation and the argumentation. Moreover, with regard to naive knowledge and misconceptions, it was decided to select some main points relating to the mechanisms, characteristics and evidences of evolution as scientific theory. With regard to the former, natural selection, speciation and adaptation have been addressed. Then, some work has been done to destroy the ideas that evolution is linear and is aimed at improvement by using fossils and other proofs. The unit was designed and implemented using inquiry- based strategies, brainstorming, laboratory activities and using the flipped classroom in some moments.

Evolution is often associated with naive knowledge, as observed both in teaching activities and from evidences in teaching research [1]. These convictions, which are formed during formal, informal and non-formal learning – re-emerge every time one tries to accurately illustrate Darwin’s theory. Therefore, at all educational levels one has to collide with a considerable baggage of preconceptions and errors [2].

Furthermore, this subject allows a spiral reflection on some nodal points of scientific teaching. It refers to both the knowledge and the scientific competences involved.

The idea behind the module presented here is to be able to use this core concept in science education to build a path that stimulates scientific thought, developing logical and critical thinking and ability to rationally observe reality, without prejudices, dogmatisms and false beliefs. We are firmly convinced that this approach to science will make the citizens more aware and active in the community.

The Unit presented here has been it has been realized in a second year class of a touristic technical institute, about 15 years’ old students.

The all path is aimed at the awareness of the phases and the tools of the scientific method paying attention to few nodal goals:

•     explanation of some common misconceptions regarding the theory of evolution, aiming at the reconstruction of knowledge;

•     cure for the awareness of scientific language vs. common language;

•     use and recognition of the scientific method in the specific field of the theory of evolution.

Each of these points was then analyzed and dealt with one or more teaching strategies; above all, the practice of scientific argumentation, which was the guiding thread of the course in the classroom, starting from the initial questionnaire up to the final check.

The table below shows the learning objectives schematically divided in terms of core concepts:

With this structure in mind, the learning design was aimed at tackling a selection of common misconceptions in this context: the linearity of evolution, the teleological vision, the tendency to complexity, the role of randomness.

To start with, a few months before beginning the module, a questionnaire was submitted to the students, created on the basis of a similar one proposed in a US study of 2015 aimed at identifying the most common misconceptions among students of high school who have not yet undergone a biology course [3].

Considering the diversity of cultural background, the questionnaire has been adapted and reduced, and has been proposed to 57 students of the two-year course (aged 14-15) of the High School ‘Elena di Savoia’ of Naples, where the author taught at that time. This allowed having a vision of the preconceptions and also of the prerequisites that it was necessary to resume in the introductory meeting, and the result was an opportunity to choose the direction in which to develop unity. Below is the questionnaire as well as the answers, where first column refers to the class (2A) in which this design was realized. 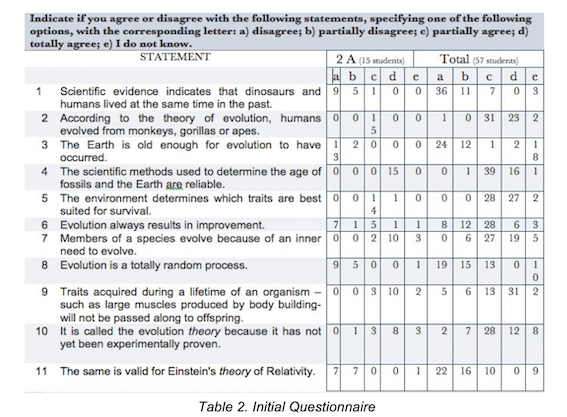 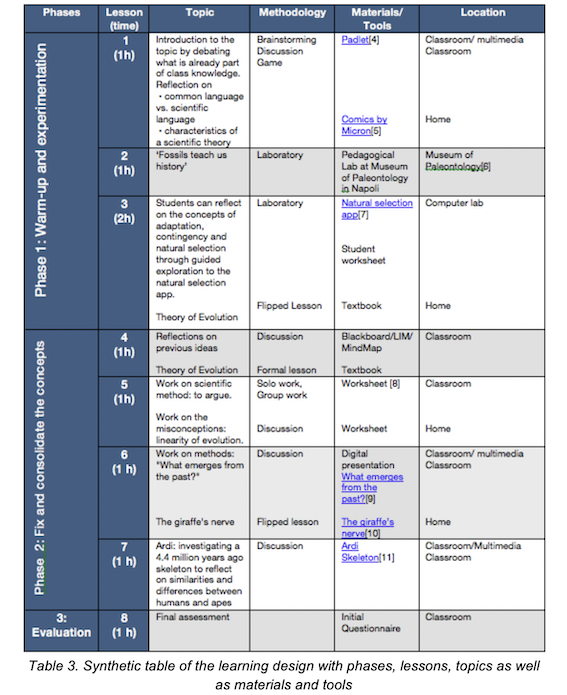 This part has been devoted to an initial brainstorming, also reminding the initial questionnaire submitted a few weeks earlier. Then, it has been chosen to plan a trip to the local Museum of Paleontology [6] as a starting activity, to motivate and involve students. Also a laboratory has been realized: “Fossils teach us history”, in which students could touch fossils, make hypothesis and discuss.

Next lesson is centered on adaptation as a result of natural selection and its relations with the biotic and abiotic mutations and factors of the ecosystem. To this end, an activity has been prepared based on a simulation on the evolution of rabbit populations developed by the University of Colorado through the Phet platform [7].

The aim is to recognize and use the proper methods of the scientific approach:

•     evaluate the validity of models of scientific investigation;

•     propose modifications to a model;

•     communicate valid and supported conclusions from the observations.

In particular, it is possible to change the environment (equator or arctic), introduce selection factors (food or wolves), mutations (fur color, tooth length) and visual data on rabbit populations are quantitatively translated on real-time graphs. Experimental aspects have a relevant space in the process and in this phase we move from qualitative to quantitative observation-analysis of collected data, reading of graphs and tables, recognition of relevant variables.

Then, as a flipped lesson, some references have been selected to study the Evolution Theory.

This phase starts with a formal lesson and a discussion on Evolution Theory, then the following meeting are devoted to work on

•     argumentation: materials of this activity has been adapted from a study by Lima-Tavares et al., [8] The teaching inspiration is a series of texts that address some observational cases, for each of which two statements are proposed that offer two interpretative keys different from the phenomenon. Students are invited to discuss them in groups and to choose one of the two positions.

•     methods: sixth moment of this path is inspired by material used in training contexts, available on the site ‘Pikaia, the portal of evolution’ [9]. Specifically, the LABevo section, an evolution teaching laboratory edited by Marcello Sala, presents a wide selection of screenplays in the form of digital presentations that can be used directly or modifiable. A laboratory on the evolution of whales,

‘What emerges from the past?’ [9] has been chosen to discuss adaptation to aquatic life, forms of transition, the functionality of organs and structures. In a spiral approach, then, we return to adaptation, natural selection, role of fossils, putting them together in an inquiry-based approach. What students are asked at this point is to apply in an operative context what has already been discussed or studied previously.

A YouTube video was used as a reflection material for the home, which refers to a classic example found on many textbooks: the lengthening of the giraffe’s neck. Once again, there is a way to reflect on the relationship between the structures and the functions of the tissues and the role that natural selection has played in this modeling.

The video [10], created by Richard Dawkins on the recurrent laryngeal nerve of the giraffe, was shot during the Darwin Day of 2009 (bicentenary of Darwin’s birth), when the biologist spent the whole day with a team who dissected a recently dead giraffe at the zoo.

The last meeting before the verification was designed to address once again one of the most frequent misconceptions in this context: “the man descends from monkeys”, second question of the questionnaire proposed at the beginning of the activity. It has been used material from a portal for educational resources in the life sciences of the Howard Hughes Medical Institute. The chosen topic, based on the fourth lesson of the Holiday Lectures on Science 2011 by dr. Tim White, is Skeletons reveal human and chimpanzee evolution [11].

Once again we describe a phylogenetic tree, in particular that of men, and refer to fossils as tools of the scientific method to determine the evolutionary relationships between organisms. The differences in the bones between the eyes, teeth and pelvis are presented and the deductions can be drawn. Moreoverm it is proposed to apply this procedure to a very well preserved fossil of Ardipithecus Ramidus, a hominid found by the team of dr. White in Ethiopia in 1994, comparing it to human and chimpanzee skeletons and finally placing it in the right branch of the phylogenetic tree.

Last lesson is dedicated to the evaluation in the form of re-elaboration of the initial questionnaire. Students are asked to answer the questions in the questionnaire again, but this time with open and reasoned answers in light of the learning path.

An ex-post evaluation was made to highlight the strengths and weaknesses of this learning unit, Strengths:

•      Predicting an activity outside the school has been strongly motivating for the students: in general the relaxed atmosphere of a field trip made the students more inclined to participate, with particular reference to the students who usually remain taciturn and solitary;

•     Preparing structured activities for students makes the activities more effective (for example, having a student worksheet that guides both the teacher and the student through the learning path of the lesson);

•     Providing frequent moments of group work or for sharing opinions and outcomes has been constructive: these moments contribute to self-awareness and help students not to stop at the request to express their opinion or to argue it;

•     Preparing lessons that include different tools and supports: alternating texts with video, online simulations, digital presentations allows you to attract different types of intelligence and keep the attention always alert.

•     The main negative note was the estimate of the times in the design phase on a double front: underestimation of the time required for the discussion of work at home and similarly for the times to be devoted to group moments;

•      Introducing new tools, used only in this unit, has slowed down the activities and did not give the desired results. One refers, for example, to the request to construct a conceptual map, to transcribe one’s own opinions; it is only a constant and repeated use of tools and methodologies to ensure that they constructively contribute to learning and are not just a diversion.