Using microdata from the 2017 Moldova Public Opinion Barometer, this paper aims to examine whether a higher political trust at the level of individuals is associated to higher levels of satisfaction with life, with the national context, and with the international context. Three different variables of satisfaction are therefore comparatively examined to check the consistency of the political trust positive effect.

The results indicate a positive effect that is consistent across different types of satisfaction, which is in line with the literature. Moreover, the paper examines the effect of other determinants beside control variables on the three indicators of satisfaction. The results could be useful for policy purposes because they indicate that a powerful governance could result into a higher quality of life.

The literature on well-being is broad and different issues in this area have been investigated over time, e.g. the relationship of well-being with political trust. This relationship has been studied using different theoretical, quantitative and qualitative approaches, many disciplines being at the core of this interdisciplinary topic. Although a positive relation is generally found, the using dataset was the main driver of the output differences. The novelty of this paper comes from the country focus, Moldova – a country which was not previously studied from the point of view of this topic. Despite of being included in cross-country studies, Moldova benefits from very few analyses exclusively focusing only on it. From this perspective, this paper comes to fill a gap in the literature.

At present, and in the last 30 years as well, Moldova is considered one of the poorer East- European countries. Like other papers note, the loss of Transnistria as well as the failure of the communist regime and of the centralized economy which leaded to the dissolution of the Soviet Union in 1999, have all determined a serious economic decline and a high poverty rate of 71% in 1996 (e.g., CIVIS, 2010). These objective economic and social dynamics suggest rather a low satisfaction, as well as low levels of well-being and political trust at the level of individuals in Moldova, and this is in fact the main motivation of this paper.

The importance of the paper is twofold. First, it investigates the main drivers of satisfaction with life, national and international context, and second it examines whether improving governance as to increase public/political trust is not only good for the country, but it equally led to a better life for citizens.

The paper is structured in four sections, i.e., the first one is Introduction, the second section presents a very brief literature review, the third section describes the data and methods, the fourth section is the empirical analysis, while the last one formulates conclusions and policy recommendations.

The microdata is taken from the 2017 Moldova Public Opinion Barometer, which includes 1103 individuals of adult age from more than 80 Moldovan localities. The survey is representative at national level for the adult population.

Three variables are used in the empirical analysis to describe different types of individuals’ satisfaction: 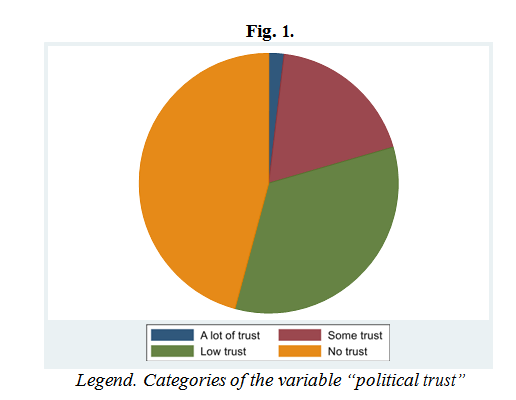 All three variables of satisfaction are ordinal variables having three orderly categories. The same set of independent variables is used in all models. The political trust, represented in our dataset by the satisfaction with the national government, is at the core of our research. It has four categories, and as shown in Fig. 1, just a small proportion of population completely trust the Moldova government. Beside this variable, other control variables are used to better explain the individuals’ satisfaction: political trust, education and savings (ordinal variables), being employed, urban, Moldovan, and income satisfaction (dummy variables), family members, age, and age square (continuous variables).

The order probit repression is the technique used in the empirical section because the dependent variable is an ordinal one.

Another finding which is consistent across all three models is in fact the negative relationship between all levels of satisfaction and the status of “unemployed”. Unemployed are more likely to be satisfied with life, as well as with national and international dynamics. This is according to a large strand of literature, e.g., Böckerman and Ilmakunnas (2006) and, Knut, G. and Gesine, S. (1996).

The impact of age on all indicators of well-being is also significant but it varies across models.

Older people have a greater satisfaction with life, while younger people feel happier with the national and international context. At this point the literature provides different findings, depending on cohorts, countries and surveys (Stepoe et al., 2015).

It is interesting to note that a higher proportion of savings from total income results in a lower satisfaction with life and with the national context. Low levels of savings and low-income levels are therefore associated to a greater satisfaction.

Besides, the paper also finds a negative correlation between satisfaction and income satisfaction, as well as between satisfaction and savings, which indicates that in Moldova happiness is somewhere beyond money. More education, less family members, being a Moldovan, living in rural areas, and having a lower income are all associated to a greater satisfaction with life, national and international context. These findings suggest that in the case of Moldova happiness relies on non-material aspects, such as it is the way that people perceive the political regime – the political trust.

Contribution selected by Filodiritto among those published in the Proceedings “3rd International Conference Inclusive and Sustainable Economic Growth. Challenges, Measures and Solutions - 2019”